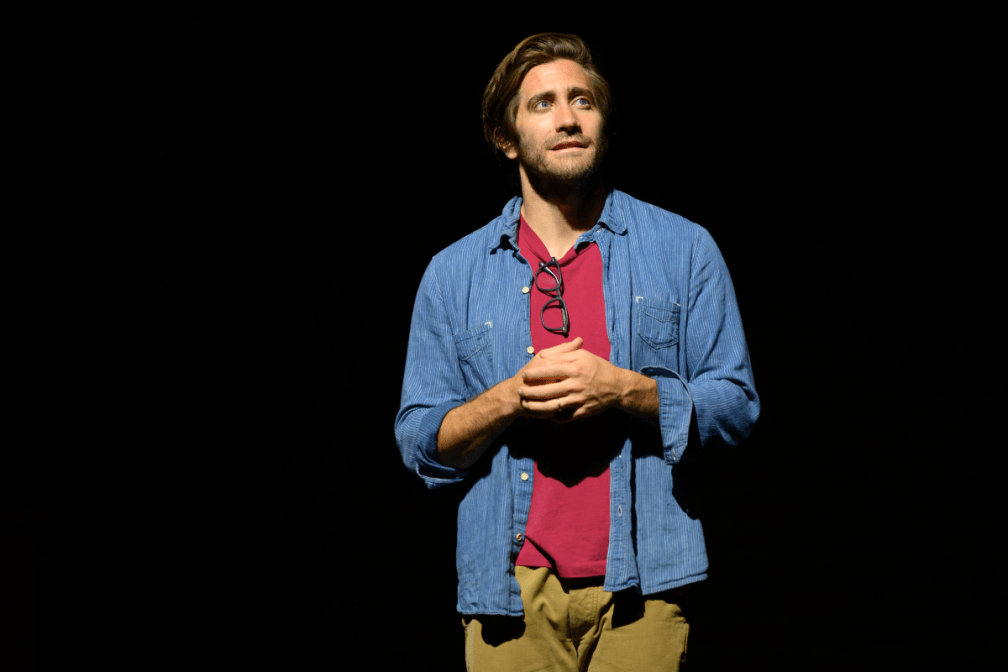 Sturridge’s physicality is engrossing. He’s as light as a butterfly, and as graceful. At times mimicking his daughter, he reveals his own childlike qualities. His story is about family: Lucy, his wife, Helen, and his father-in-law, Arthur.

He describes them each with sensitivity, and such specificity that somehow they seem as familiar to us as they are to him. At least, we feel that way when the actor talks to us. After all, we’re part of the story. And Alex is quick to humor us.

Once, questioning Arthur about his fervent insistence on the existence of God, Alex asks what he looks like. Arthur responds, “whatever I think he is least likely to be like, then that is what he will be.”  “So I ask him if he means God looks a bit like Danny DeVito…”

The existence of God, is one of the mind grappling issues at work in Alex’s life. Loss challenges us to wonder about the nature of a divine spirit, and to question the inexplicable nature of things.

In Life, Act II of the evening, Jake Gyllenhaal jaunts quickly onto the stage, and mistakenly turns off all the lights. Opens the stage door to figure out how to get the lights back on. Screws it up a couple of times, and finally gets it right.

Like Alex, Gyllenhaal’s Abe is talking about having a baby. But unlike Alex, Abe acts out the other characters in the story. From the very beginning there is an inner duality at work. In this actor’s masterful hands, however, it all flows seamlessly even when contrary events occur simultaneously.

Gyllenhaal is well acquainted with the work of playwright Nick Payne, whose plays Constellations and If There Is I Haven’t Found it Yet, he previously appeared in. Here, Payne evokes a quintessential challenge of physics about how two things can inhabit the same space at the same time. We’re in the realm of atomic fusion.

When we meet Abe, he’s basting chicken for their dinner party when Mary imparts that she’s pregnant. Their daughter arrives simultaneously with the death of a loved one. Gyllenhaal takes hairpin turns, assisting in his wife’s difficult child birth, while tyring to say his final goodbyes to another.

Directed by Carrie Cracknell, the production is animated, deeply human, and highly personal. Performed on a nearly naked stage, it’s the soulful human experience that we share.