September 21, 2021: Martyna Majok, who won the Pulitzer Prize in 2018 for Cost of Living, her touching play about disabled people, continues to examine issues relevant to the socially dispossessed in Sanctuary City. It’s at the Lortel after its opening at the New York Theatre Workshop last year was suspended when the pandemic hit. Still under the NYTW’s aegis, the fitfully engaging Sanctuary City offers insights into the lives of young immigrants, the kind usually referred to as “dreamers.” Those, of course, get their name from the Dream Act proposal—swiftly alluded to-that would allow undocumented immigrants eventually to be granted permanent residency. It has other things on its mind as well. 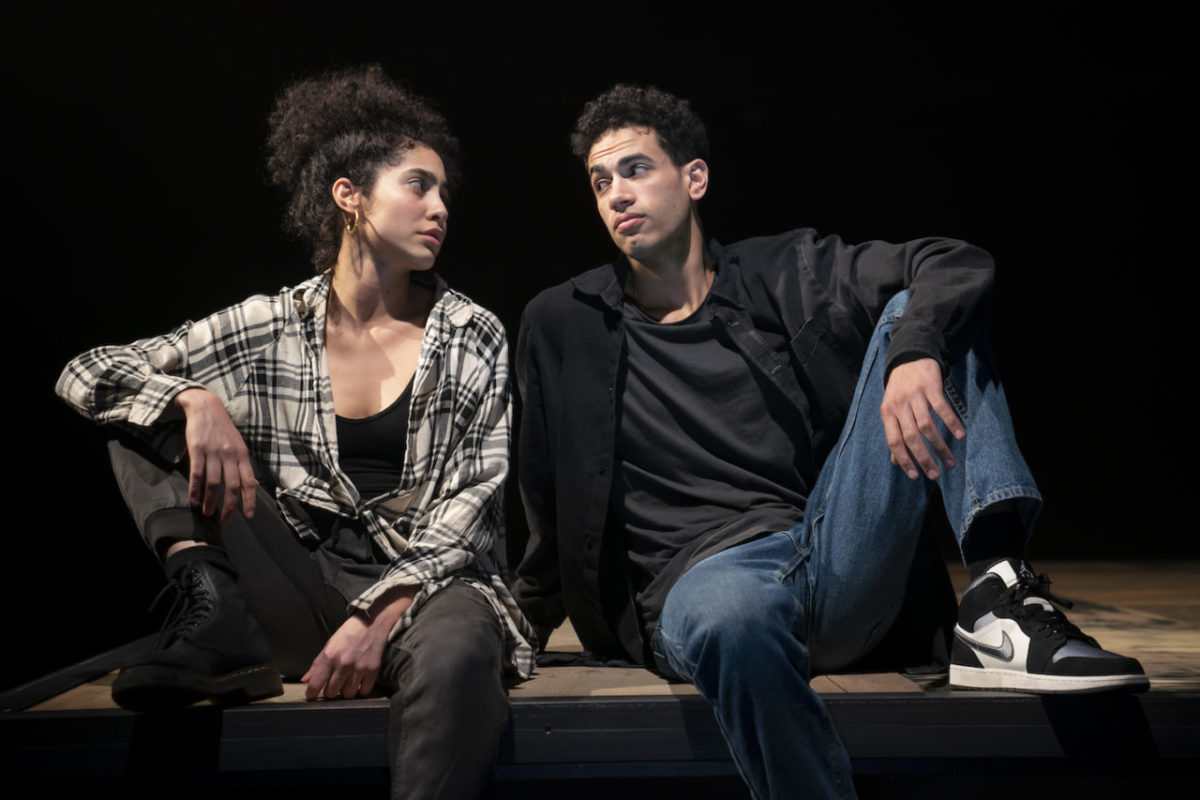 September 21, 2021: Martyna Majok, who won the Pulitzer Prize in 2018 for Cost of Living, her touching play about disabled people, continues to examine issues relevant to the socially dispossessed in Sanctuary City. It’s at the Lortel after its opening at the New York Theatre Workshop last year was suspended when the pandemic hit. Still under the NYTW’s aegis, the fitfully engaging Sanctuary City offers insights into the lives of young immigrants, the kind usually referred to as “dreamers.” Those, of course, get their name from the Dream Act proposal—swiftly alluded to-that would allow undocumented immigrants eventually to be granted permanent residency. It has other things on its mind as well.

Majok, a Polish-born immigrant who came here at five and was raised in working-class circumstances in New Jersey before studying playwriting at Yale and Juilliard, focuses on the relationship of two teen immigrants of undetermined nationalities living in Newark. The script declares, “No character, however, is of Western European origin/ethnicity, or from a country of greater liberalism than the United States.” Majok’s aim is to open the casting to a wide variety of possibilities.

She calls the boy “B” (Jasai Chase-Owens) and the girl “G” (Sharlene Cruz). This, though, seems arbitrary, and not particularly helpful, given that a third character, Henry (Austin Smith), is introduced midway through. B and G are surely real enough to be given actual, non-ethnic-defining, names.

The time is between 2003 and 2006, before gay marriage was legalized, allowing Majok to create a Gordian knot tying immigration problems together with the complications implicit in same-sex partners being unable to marry. Much as this helps create dramatic tension, it can’t prevent a patina of unintended datedness from settling over the proceedings.

Close attention is needed at first to pick up on time and place. Hints, like references to “the Towers,” are easy to miss in the machinegun-like dialogue and action. Songs on the soundtrack might help, at least if you’re familiar with them. (Tom Scutt’s costumes are generic enough to represent anytime in the past two decades.) Strangely, the program provided at the preview I attended had only information about the NYTW and nothing about the production itself, not even a cast list.

The uninterrupted hour and 45-minute Sanctuary Ciy is in two parts, separated by a slightly extended blackout, both using a bare minimum of props. Scutt’s minimalist, furniture-less set is a slightly raked, floating platform against a black, brick wall, and nothing else. Part one is a sequence of brief, rapidly done sketches between B and G done in flashy jump-cut style stitched together with multiple lighting effects by Isabella Byrd. These are conjoined to equally striking sound cues crafted by Mikael Sulaiman. Both deserve commendation for their collaborative creativity.

The lights pop off, then pop back on a second later to find B and G in different places and attitudes, suggesting forward movement in time. This is cleverly handled by director Rebecca Frecknall and well-executed by Chase-Owens and Cruz. Still, as is often the case with snazzy effects, exposition and character development tend to lose immediacy in the haze of show-offy technical achievement.

G is the daughter of an immigrant mother with an abusive partner from whom G and her mother endeavor to escape. Her mother’s getting naturalized before G is 18 allows her to become a citizen automatically. B’s situation is more fraught. Like G, he came here when very young. He and his mother overstayed their visas so they’re always in danger of drawing undue attention from the law. When B’s fed-up mother decides to return to her native land, leaving him behind, he, strapped for money, must navigate the shoals of his status with G’s assistance. That green lights the idea of a green card marriage—with its attendant complications and dangers. If so, it might be best to practice for what they’re going to ask.

The precise nature of B and G’s relationship—highlighted by the question of when they began their romantic relationship that arises when they roleplay a potential green card examination—is deliberately kept vague, despite their often sharing a bed. The full dimensions of their relationship only become clear in part two, set in 2006, after G has gone off to university in Boston and B is living with Henry, a law student. Suddenly, G shows up and the play moves into the eternal triangle territory of domestic melodrama as unresolved issues are addressed, questions of marital equality confronted, and B’s closeness to Henry is endangered.

What happened to that green card marriage? Why has G returned and what is driving her behavior? How will Henry react? Majok has created a situation ripe with opportunities for emotional head-butts, several with resounding results. The situation, however, can’t quite hide the seams of diagrammatic stitching (in a play about legal difficulties, must Henry really be a law student?). Ultimately, it’s unable to prevent the feeling that contrivance is throwing shade on authenticity.

There is, nonetheless, much to admire in Sanctuary City’s writing (despite its excessive fondness for de rigueur profanity), staging, design, and acting. It’s sprinkled with music, and even finds openings for dancing and humor. As G, Sharlene Cruz, her hair messily piled high, shines with fire and spirit regardless of the downbeat grunge of her flannel shirt and combat boots. Jasai Chase-Owens, long, lanky, and graceful, makes a distinctive mark as B. And Austin Smith provides a strong—perhaps, with pecs and shoulders straining against his muscle shirt, too strong—impression as the grammatically precise, disgruntled Henry.

It’s easy to sympathize with the dilemmas plaguing immigrants here since childhood through no fault of their own and knowing little of any other culture yet always threatened by expulsion. Similarly, the blending of green-card marriages with marital inequality has a certain dramaturgic piquancy. But while Sanctuary City held my interest about 75% of the time, it was more because of its reflection of concerning issues than because of how convincing a portrayal it was of them.

Proof of full Covid-19 vaccination with an FDA or WHO authorized vaccine will be required for entry. Please also bring a photo ID and a mask. Masks are required at all times inside the building and theatre.