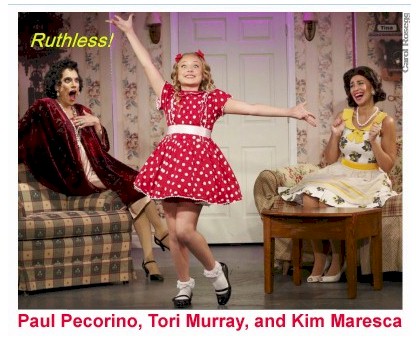 Described as “a mash-up of [films] The Bad Seed and All About Eve and [the musical] Gypsy, plus the films of Douglas Sirk and John Waters,” it stars Kim Maresca, Tori Murray, Paul Pecorino, veteran star of stage, screen, and cabaret Rita McKenzie (Ethel Merman’s Broadway; and a co-star of the Los Angeles premiere of the original Ruthless!), Andrea McCullough, and Jennifer Diamond.

Paley, who directed the original Off Broadway production (1992), is director, with Laird as music supervisor.

The revival marked the Off Broadway debut of powerhouse singers Murray and Maresca, who are both soon to headline Feinstein’s/54 Below.

On March 17 at 9:30, Maresca, Ruthless!’s Mommy not-so-dearest Judy Denmark, returns to the cabaret with a stageful of seven musicans under director Jeremy Clayton  (First Daughter Suite) and music director Jon Balcourt (The Book of Mormon); withadditional staging by Barry McNabb. Orchestrations and arrangements are by Larry Moore and Josh Clayton. 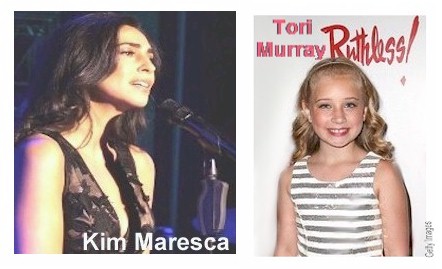 On March 29 at 7, 11-year-old Murray, described in her performance as a precocious, all-smiling, all-dancing, all dementedShirley Temple look alike who belts like Ethel Merman, becomes Feinstein’s/54 Below’s youngest solo performer as she debuts her new show Ready or Not, Here I Come, “a mini-musical blending of a tale of growing up through songs from pop music as well as Broadway, film, and TV favorites.”

It’s produced by the musical’s co-producer Evan Sacks, with proceeds going to The Broadway Dreams Foundation. The concert is written by Murray and her father Tom. Dan Foster will direct, with music direction by Jason Wetzel and vocal arrangements by Thomas and Linda Smargiassi.

Tickets for Tori Murray: Ready or Not, Here I Come  are $40-$75 (plus $6 per ticket service fee), no food/beverage minimum. Purchase as above.

Ruthless!, subtitled “the stage mother of all musicals,” is touted as being “no mere revival, but a newly imagined meditation on narcissism, talented tykes and stage mothers in a world that has since been introduced to such gems as Toddlers & Tiaras and Here Comes Honey Boo Boo.”

It’s the story of a most dysfunctional theatrical family. Tina Denmark is a pretty, charming, sassy, and diabolical eight-year-old born to entertain, who with the encouragement of overbearing agent Sylvia St. Croix, goes to any lengths to capture the lead in her school play. But where does such remarkable talent and unbridled ambition come from? No spoilers here. The shocking answer is revealed, amid rollicking laughter, in Ruthless!.

“A wildly tainted and skewed homage to show-biz and its denizens,” with an “irresistibly inane book and abetting lyrics,” and “a restorative indulgence of sheer lunacy”are some of the critical accolades.

Ruthless!, at St. Luke’s Theatre, 308 West 46th Street, is produced by Maxine Paul, Sacks, and Ken Schur. Performances are Mondays at 8 P.M., Thursdays at 7, and Saturdays at 2. Purchase tickets by calling Telecharge, (212) 239-6200, or at www.RuthlessTheMusical.com.