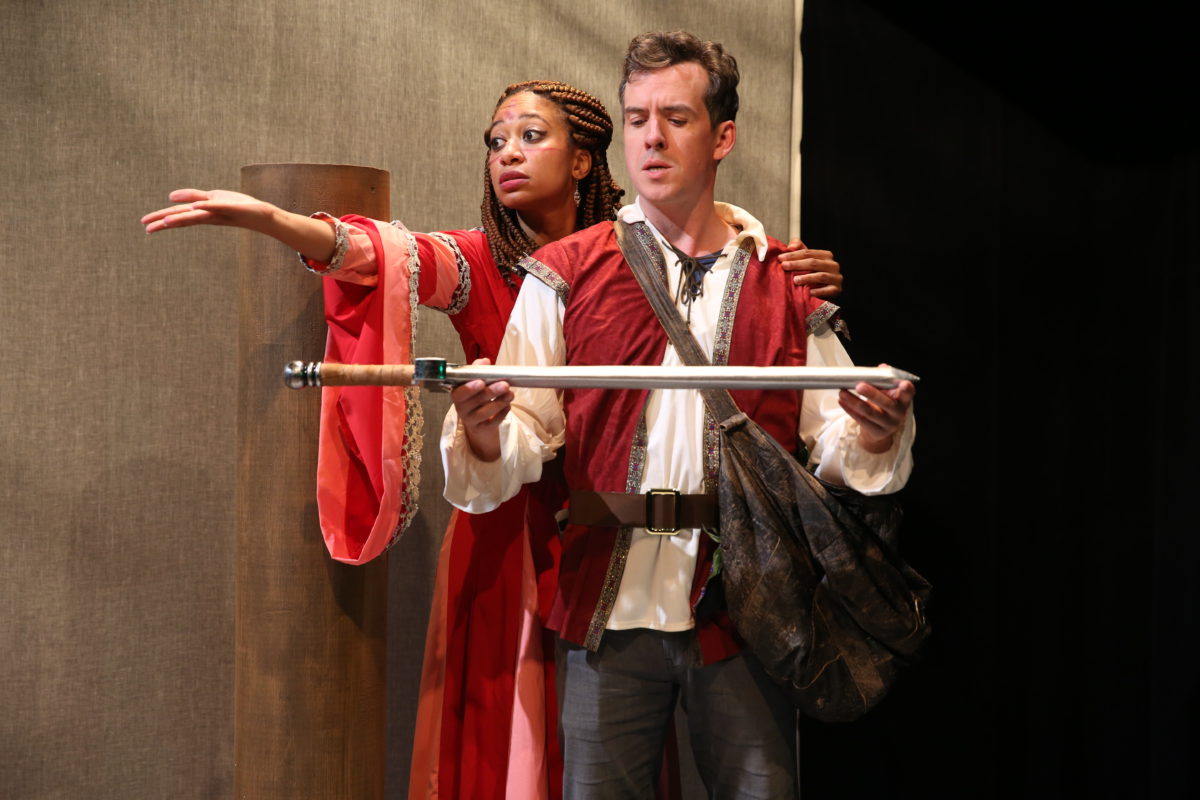 Performed in the wee confines of 59E59’s Theater C, where my front row seats required my feet to rest on the scenic flooring, Vaynberg’s overstuffed play—in which she also offers a droll acting performance—has three structural components.

One part is the budding love affair of Laura and Zach (Craig Wesley Divino), who meet after connecting online. She ghostwrites romance novels under the name of a famous, now deceased, female writer. He’s a consultant and writer on the enormously popular “Round Table,” a sort of latter-day “Game of Thrones” series based on the characters in King Arthur’s court.

The second is episodes from the TV show itself, replete with pompous, faux-archaic language. Although Zach doesn’t claim to be an actor, the actor playing him assumes the roles of Tristan and Merlin, while the sorceress Morgan Argante is acted by Sharina Martin and the villainous Mordred is handled by Matthew Bovee. We have to accept the premise that such a clumsily written show with such two-dimensional, English-accented characters would be a smash hit.

The third, played by the same actors and dealing with the same Camelot-based world, concerns Zach’s hobby as a LARP player. LARP, as many of us learn along with Laura, is an actual game in which participants improvise at “Live Action Role-Playing.” In it, nerdy people create characters in a given historical world, devise scenarios, wear costumes, use appropriate props, speak in phony approximations of premodern English, and follow specific rules overseen by a game-master.

Skeptical and unsure of herself, Laura nonetheless joins in the game playing, with Zach and two others, Lena (Martin) and Jeff (Bovee), but keeps fouling up the faux-faux language and procedures, in which everyone is focused on obtaining the powerful sword Clarent, inspiring a lot of metal on metal swordplay only inches away from us. It’s meant as satire but is as funny as a rubber duck.

And, for all its reminders of Spamalot, it’s so overstuffed it deserves to be called Cramalot.

Round Table, performed on Izmir Ickbal’s set of simple, abstract unitsbacked by a wall of scrim, shifts from one to the other of these components under Cha See’s lighting and backed by Fan Zhang’s sound design. It vaguely ties the themes of the fictional scenes to the “real” lives, not just of Zach and Laura, but those of Jeff, a tax attorney, and Lena, a bartender.

Also significant is Jeff’s gay brother, Kay (Karl Gregory, his nicely-done cynicism molding the best performance). Kay, an emergency medical technician, doesn’t appear in the medieval scenes but his name, knighthood fans may notice, is the same as that of King Arthur’s brother. His presence helps further cloud Vaynberg’s purposes, like the play’s dead-end references to Zach and Kay’s homophobic parents.

Kay’s occupation also connects the real-life situations to the fake ones since Zach is suffering from a life-threatening brain disease. Of course, the people he enacts also contend with mortality, even though we may wonder why, if he’s not an actor, he keeps appearing as one.

As we watch the shifting layers of reality—“real life” (albeit a dramatized version), a scripted TV version of a real life that never existed, and an amateur combination of improvisation and scripted enactment—we can’t help but wonder where Vaynberg is going. Her answer is to provide only further opacity by introducing allusive, fourth wall-breaking, spotlit monologues for each character that provide digressive exposition and do nothing to advance the plot. They seem primarily intent on vaguely expressing the speaker’s personal concerns, whatever they may be. Spoken mostly at a rapid clip under Geordie Broadwater’s uninspired direction, they do little more than hasten the sinking of Round Table into the misty waters of Avalon.

The only way this material might work would be if it were funny—or even if only its LARPing scenes were. I was hard put to understand all the laughs it was generating, especially from a young woman behind me chuckling at so many weak lines that she started sounding like a plant. Admittedly, there are one or two passably entertaining scenes. One presents Laura’s astonished fan’s reaction to learning that Zach works for her favorite show. Otherwise, there’s simply not enough humor, much less relatable emotion, present to crawl more than a few inches round the table.

There’s a certain musical about the fabled knights and ladies of King Arthur’s court whose title song declares, “A more congenial spot/For happily-ever-aftering than here/In Camelot.” Round Table is neither especially congenial nor somewhere you’d go for happy-ever-aftering.