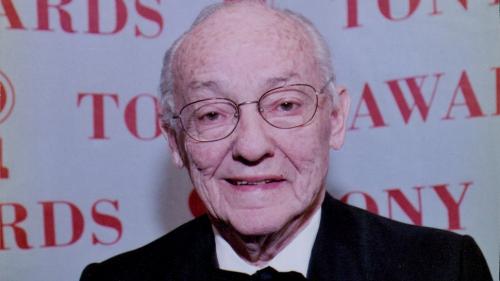 The Broadway community mourns the loss of Chairman of the Nederlander Organization, theatre owner/operator, producer and presenter James M. Nederlander, who passed away on July 25th at age 94. James M. Nederlander, “Jimmy,”  was a visionary theatrical impresario who built one of the largest private live entertainment companies in the world that now encompasses venue ownership and management, theatrical producing and concert presentation, merchandising, concessions and patron services.

Venues across the West End and on Broadway will be dimming their lights in his honor on Wednesday, August 3, 2016. The marquees of Broadway theatres in New York will be dimmed at exactly 7:45pm for one minute, and dimmed on the West End in London at 7:00pm before the evening’s performances commence.

“Jimmy Nederlander’s name has been synonymous with quality theatrical productions in New York City and throughout the United States throughout his career, and in recent years his name has also come to symbolize excellence and achievement when “The Jimmy™ Award” is presented annually at the National High School Musical Theatre Awards. A tribute to his passion for arts education, his legacy will help to inspire the next generation of performers and enthusiasts,” said Charlotte St. Martin, President of the Broadway League. “Beloved by the industry, Jimmy was a loyal and trusted collaborator and a guiding mentor to so many. He was “one of a kind” and his indomitable spirit lives on throughout this country in the people he nurtured who are helping to make Broadway what it has become today. He will be sorely missed, and our thoughts are with his family and friends.”

Julian Bird, Chief Executive of Society of London Theatre, said, “James Nederlander was a true titan of the theatre industry. His beautiful theatres here in the West End, which are filled with thousands of people every night, are a testament to his vision and the organisation he grew on both sides of the Atlantic. He was a friend and mentor to so many in the industry and he will be missed greatly. We are proud to acknowledge his extraordinary contribution to our industry with the dimming of London’s theatre lights.”

During a career that spans 70 years, he has amassed a network of premier legitimate theatres including nine on Broadway: the Brooks Atkinson, Gershwin, Lunt-Fontanne, Marquis, Minskoff, Nederlander, Neil Simon, Richard Rodgers, and the world-renowned Palace; Chicago: Auditorium and Bank of America Theatres, Broadway Playhouse, Cadillac Palace and Oriental Theatres; in Los Angeles, the magnificent Pantages Theatre; and in London, the Adelphi, Aldwych, and Dominion Theatres.

He has produced over one hundred of the most acclaimed Broadway musicals and plays including Annie, Applause, La Cage aux Folles, Me and My Girl, Nine, Noises Off, Peter Pan, Sweet Charity, The Will Rogers Follies, Woman of the Year, and many more.

Mr. Nederlander’s name is forever linked to some of the world’s most distinguished performing companies whose work he produced and presented on Broadway including the Royal Shakespeare Company’s acclaimed productions of The Life and Adventures of Nicholas Nickleby, Les Liaisons Dangereuses, Cyrano and Sherlock Holmes; Rudolf Nureyev and Friends, The Bolshoi Ballet, and the Virsky’s Ukranian State Dance Company.

He is credited with developing the outdoor amphitheatre concept as the developer of several premier venues including the New Jersey Garden State Arts Center, Pine Knob Music Theatre, the Merriweather Post Pavilion, the Pacific Amphitheatre, and as the decades-long operator of the Greek Theatre where he has presented headline artists including Tony Bennett, Judy Garland, Lena Horne, Jackie Mason, Liza Minnelli, Frank Sinatra, Andy Williams, and a legion of others.

In 1972, Mr. Nederlander and his pals Earl Blackwell, Gerard Oestricher and Arnold Weissberg founded the Theatre Hall of Fame, which is still housed in the lobby of the Gershwin Theatre. In 1973, he partnered with George Steinbrenner to purchase the New York Yankee Baseball Club.

Mr. Nederlander is the recipient of many distinguished honors including the United Nations Foundation Champion Award (2012), The Broadway League’s Schoenfeld Vision for Arts Education Award (2010), the New York Pop’s Man of the Year (2008), the Special Tony Award® for Lifetime Achievement (2004), The Actors’ Fund Medal of Honor (2002), The Broadway League’s Distinguished Lifetime Service Award (2002), United Jewish Appeal-New York Federations’ Bernard B. Jacobs Excellence in the Theatre Award (1997) and the Hollywood Chamber of Commerce Star on the Hollywood Walk of Fame, located outside the Pantages Theatre at 6233 Hollywood Blvd. In 2009, the National High School Musical Theatre Award was established and named the Jimmy® to celebrate his career-long dedication to supporting young talent.

He received an Honorary Doctorate of Fine Arts at the forty-third Commencement exercises at The University of Connecticut School of Medicine, School of Dental Medicine and Graduate School on Monday, May 12, 2014.

His full Broadway biography can be found on the Internet Broadway Database at https://www.ibdb.com/broadway-cast-staff/james-m-nederlander-22469