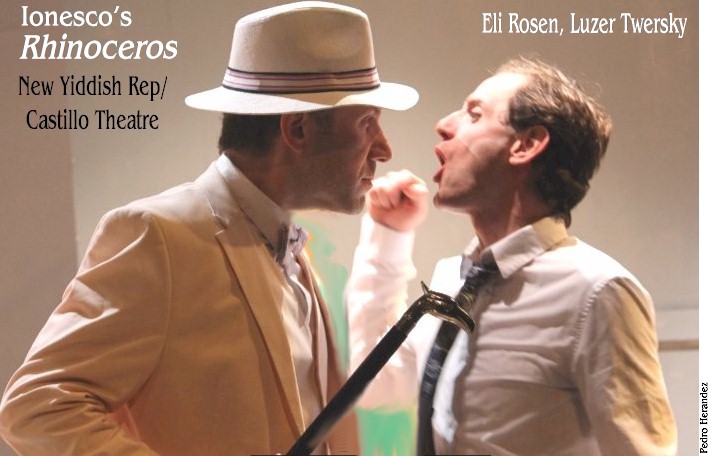 Though Moshe Vassur’s production doesn’t rise to the level of Sholem Asch’s God of Vengeance, this rare revival is an opportunity to experience the playwright’s classic comedy of the absurd, which boasts a contemporary translation by Brooklyn’s Eli Rosen, a God of Vengeance cast member, with references to current events.

In a program note, Rosen writes: “Rhinoceros reminds me of the personal struggle of many of my current and former co-religionists [Hasidim] who are trapped in their own skin. All too many of them are prisoners of conscience who in public tout their lifestyle as higher and more sublime, but in private yearn to be free of their social constraints.”

It’s a quote to consider in understanding Ionesco’s protagonists John — Jean in the playwright’s text for the January 1960 Paris premiere, and Bérenger. Cast member Caraid O’Brien writes a program note about Ionesco and Yiddish theater. The playwright was one of the foremost figures of the post-WWII French avant-garde theater. Two Must-read program articles are Ionesco and Rhinoceros and Rhinoceros Now? They will give insight into this classic and unique piece of theater.

The play, set in a small provincial French town square with a grocery, the office of a publishing firm, and the apartments of Jean and Bérenger, has been formatted from three to two acts, with a run time of two hours, including intermission. With its themes about the human condition, philosophy, mortality, mob mentality, and conformity, Rhinoceros is often cited as “a response to and criticism to the upsurge of Fascism and Nazism preceding WWII.” Ionesco lightens the message by merging the sublime with the ridiculous.

Director Yassur (NYR/Castillo Yiddish co-productions of Beckett’s Waiting for Godot and Miller’s Death of a Salesman) has put together an energetic and glib 12-person ensemble (with four actors in dual roles – which requires a keen ear and close observation.) There are four standout performances – Rosen as Jean, Luzer Twersky (God of Vengeance) as the neurotic Bérenger, Alec Leyzer Burko in the roles of The Logician and Botard, and Gera Sandler portraying Papilion and the Gentleman. That said, the wide expanse of the Castillo’s L-shaped space, where there are two L-R tiers of stadium seating quite away from the playing area, isn’t always complimentary.

Town inhabitants are suddenly afflicted with ever-growing bumps on their heads as they strangely segue into rhinoceroses, which are marauding the town. The only one to escape this metamorphosis is Bérenger, Ionesco’s “everyman,” in whom the preening immaculately-dressed/groomed Jean [who reminded me of Tom Wolfe and Gay Talese] can find no redeeming qualities — he’s a heavy drinker, tardy, slovenly and increasingly paranoiac. Then, there’s the heated discussion of cats and differences between Asian and African rhinos by Dudard (Sean Griffin) and Papilion. In the final scene, something not always associated with Ionesco, romance blooms. Circumstances you will discover prevent any beastiality.

This is the first New York production of Rhinoceros since Off Broadway’s  1996 revival with Zach Grenier and Peter Jacobson as protagonists John — Jean in Ionesco’s text for Paris’ 1960  premiere, and Bérenger. The 1961 Broadway premiere starred Zero Mostel (John) in his first Tony-winning performance, and Eli Walach (Bérenger). In the large ensemble were Anne Jackson and Jean Stapleton. It ran 240 performances. Olivier originated the role of Bérenger in the 1960 West End production.

New Yiddish Rep is dedicated “to creating modern theater which speaks to a diverse contemporary audience, including those who never might have thought they could connect to a performance in a language other than their own.”
September 9, 2017