She did her famous impressions [including a killer Streisand and Zsa Zsa Gabor], paid tribute to her idol Judy Garland, and told stories from her celebrated career and her personal life: the morning she woke up, America’s Sweetheart, to find herself in the middle of a love triangle, as she found out husband, Eddie Fisher left her for her best friend, Elizabeth Taylor [whose late husband Mike Todd was his best friend]; and the husbands who took her to the cleaners, such as #2 Harry Karl, “a shoe salesman.”

She also told audiences, “Those of a certain age may remember me; the others know me as Princess Leia’s mother!”

That princess of Star Wars fame was, of course, Carrie Fisher.

Last week, we witnessed the unthinkable: Carrier Fisher having a massive heart attack on the return leg of a flight to Los Angeles and passing away on Tuesday, December 27. And Miss Reynolds, 84, who had been in “frail health” for several months, suffering a stroke and death the next day after sending out a message thanking her daughter’s fans for their outpouring of love.

The indefatigable Miss Reynolds appeared or did voice work in over 50 features, guested in numerous TV series/movies, and had her own TV series. But there were lows along with the highs. In an attempt to pay debts left by her second husband, she ended up broke and declared bankruptcy. She even confessed to living in her car.

For years, her relationship with Carrie was rocky. Carrie wrote of that in her autobiographical Postcards from the Edge, adapted for the screen starring Shirley MacLaine and Meryl Streep. In TV appearances both were blunt about their dust ups, and how they finally resolved them. It helped when Carrie purchased the house next door to her Mom. Part of the problem was that both traveled for work extensively.

Though home was North Hollywood, Miss Reynolds said, “I’m hardly ever in one place very long. [She tallied an average of 42 weeks a year on the road.]

“But touring helps keep me in shape. Some of my good fortune comes from family genes. We were very athletic. My brother was a pro ball player. I was always on athletic fields and very fit. My goal was to be a physical education teacher and train for the Olympics. I never wanted to be in movies. There were no Hollywood dreams.”

Her career was an accident. “At 16, I entered the Miss Burbank pageant. I was far from the most glamorous girl, but I won! It was one of those things that blows you out of the water and on a new path. It changed everything.”

After minor roles, she was signed at MGM in 1950, where she appeared opposite Fred Astaire and Red Skelton in Three Little Words, loosely based on the life of songwriters Harry Ruby and Bert Kalmar.  Two years later, came the good fortune that changed her life and led to a legendary career in film: she was cast as the ingénue Kathy Selden in Singin’ in the Rain, opposite

Kelly and O’Connor [a life-long friend and “a prince among men”]. “Gene was brilliant,” stated Miss Reynolds, “but a taskmaster. I’d say he invented the word. I worked hard to look good next to him. Gene was as demanding as Fred, but in a different way. Fred exuded class and made you feel special.” She declined to discuss Kelly. She was elated to star again with Astaire in film adaptation of Cornelia Otis Skinner/Samuel Taylor’s The Pleasure of His Company(1961).

Working in the studio system was definitely an education. “You were under contract, told what film you’d do, and how you’d do it. The director was king. I had a lot to learn, which I did. I was fortunate to be under the tutelage of very talented people. When I wasn’t working, I’d come to the studio for dance classes and hang around to learn how to do make-up, hair, wigs, and watch movies.”

Long a “movieoholic,” she began collecting memorabilia at a time when no one thought it had value and was being literally thrown out. She amassed a magnificent and massive collection of costumes and posters. She laughed that to give value to the posters, “I’d drive to stars’ homes to get them autographed!”

In the 90s, assisted by son Todd Fisher, she turned her collection into a Las Vegas movie museum at her very own hotel/casino. The venue shuttered in 1997 and when she couldn’t find funding for a permanent home, she put the entire collection up for auction.

Film highlights include: I Love Melvin [again with O’Connor], The
Affairs of Dobbie Gillis, Tammy and the Bachelor, The Singing Nun, The Catered Affair [as Bette Davis’ daughter), The Rat Race , and How the West Was Won. Her duet of “Aba Daba Honeymoon” with long-cherished friend Carleton Carpenter from 1950’s Two Weeks with Love, became the first movie tune to become a # 1 chart-topper. It earned Gold Record status.

Miss Reynolds’ favorite film — the one that earned her an Oscar nomination — was the 1964 musical, The Unsinkable Molly Brown. She later did a touring stage version of the show for two years. “I was in my 60s, and it was then or never,” she said. [A version was workshopped for Broadway but never materialized.] She also toured in Irving Berlin’s Annie Get Your Gun.

She first took the Big Apple by storm in 1973 when she starred in the musical Irene, receiving a Tony nod as Best Actress. She was thrilled Carrie made her Broadway debut in the ensemble at age 17. “It was a wonderful experience,” she recalled. “I loved my cast, my crew. We became like family. Everyone called me mother! Especially Carrie!”

She returned in ‘76 in Debbie, a 14-performance revue; and in the early 80s in Woman of the Year. “I love working live and was offered three great opportunities, but the producers insisted on eight shows a week, so I had to say no.” 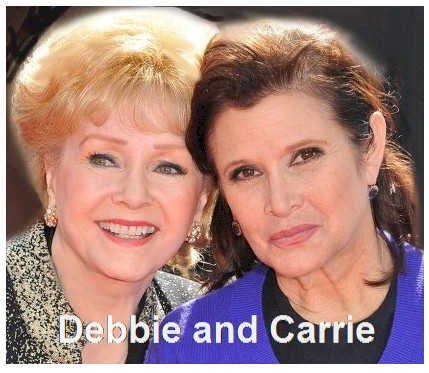 For years, she was in and out of the City: in 1980 when Carrie co-starred opposite Stephen Collins, Alma Cuervo (currently Gloria Estefan’s grandmother Consuelo in On Your Feet!), and Chris Sarandon in the long-forgotten, short-lived Andy Roberts and Howard Schuman musical Censored Scenes from King Kong; and when Carrie replaced Amanda Plummer in Agnes of God, opposite Elizabeth Ashley, at the Music Box. She was married to and often estranged from Paul Simon and having substance abuse problems. She missed numerous performances.Miss Reynolds would arrive at the theatre and ask, “Is she in?” If told no, she’d go to dinner.

Miss Reynolds was also known for guest-starring roles in 80s TV series Aloha Paradise and The Love Boat; as Debra Messing’s mother on Will and Grace, which earned her an Emmy nod; and her all but unrecognizable, hoot of a performance as Liberace’s mother in Steven Soderbergh’s Behind the Candelabra, starring Michael Douglas and a game Matt Damon. Son Todd co-produced the new documentary, Bright Lights: Starring Carrie Fisher and Debbie Reynolds.

Regarding her marriage to crooner Eddie Fisher and their headline-making divorce following his affair with Elizabeth Taylor, Miss Reynolds, after a moment of long introspection, said,
“There were regrets, more than a few, but look what I received: my gorgeous children.”

Was it difficult to forgive Miss Taylor after your years of friendship? “No, but it took a while. I had to come to the realization that like me, and later Connie Stevens, she was as big a fool as I was. Liz probably did me a favor.” In her 1988 autobiography, Debbie: My Life, she described a marriage unhappy from the beginning. “[Eddie] didn’t think I was funny.  I
wasn’t good in bed. I didn’t make good gefilte fish or good chopped liver.” She had one positive: “a little turned-up nose” and Fisher told her: “The children better have your nose.”

The Reynolds/Taylor relationship as well as their star movie status made for some campy and fiery exchanges in the
semi-autobiographical 2001 TV movie These Old Broads, which
co-starred MacLaine and Joan Collins.

Through good and bad, Reynolds had always been the ultimate trouper. “Life is hard, and laughter helps get you through it,” she said. “Thank God, so far, I’m unsinkable. When the times get tough, you just have to get tougher.”

Debbie Reynolds was once quoted, “My greatest fear is outliving my daughter.” That fear came true. As recent events unfolded, times really got tough when Miss Reynolds woke up to the unexpected, a mother’s worse nightmare: the sudden death of a daughter.