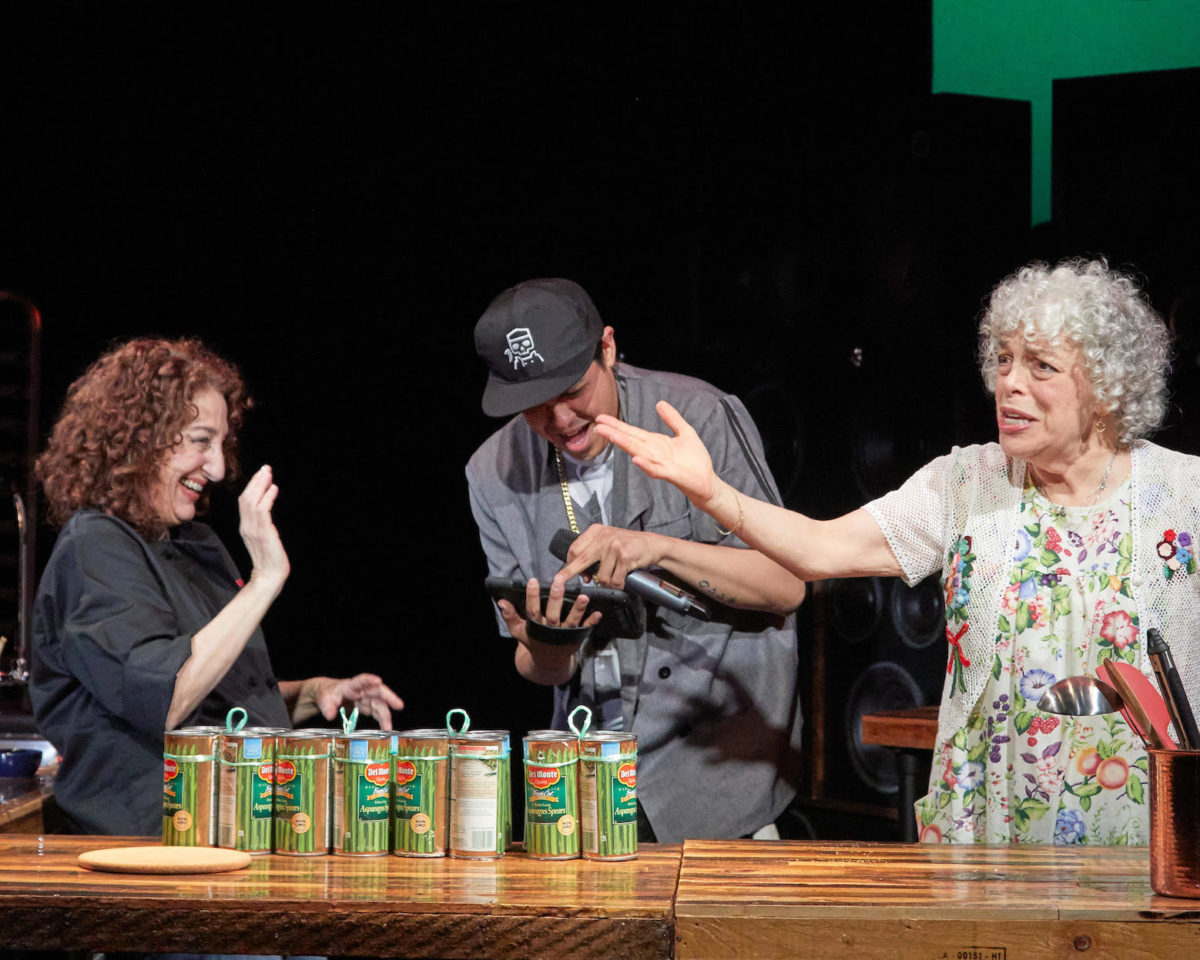 The Raging Skillet: The True Life Story of Chef Rossi, a Memoir with Recipes was discovered by LaMarre at a book expo where Rossi was demonstrating her flair for cooking while wowing patrons with her colorful stories. LaMarre, who also saw success with food-as-a-memoir play I Love, I Lost, I Made Spaghetti, has brought Rossi’s bold but endearing story of rebellion and her search for identity to a great triumph in Raging Skillet. Everyone can relate to some aspect of the absorbing story of a mother and a daughter, and the conflicting views that poke at their commitment to their family.

Raging Skillet begins with rebellious caterer Rossi (Dana Smith-Croll) celebrating the launch of her new book with a party. She enters a stage that also functions as a working kitchen (designed by Michael Schweikardt), moving through smoke and fog, surrounded by a backdrop of speakers aimed to set a tone of defiant musicality. The energetic club-like vibe is cemented with the upbeat, entertaining antics of DJ Skillit (George Salazar), who is a multi-threat as he pumps up the crowd in his multiple roles of sidekick, assistant, and the many-sided characters that flitted throughout Rossi’s life. When the ghost of Rossi’s deceased Orthodox Jewish mother (Marilyn Sokol) arrives unannounced, the self-professed “lesbian punk-rock caterer” finds herself coming to terms with the family and traditions that shaped her persona.

Yes, Skillet does offer its audiences tastes of the treats Rossi prepares as she reminisces about her first catering job, the day Elvis died, and designing vagina-themed fare for an Eve Ensler party (Smith-Croll’s description of a four-foot fruit crotch is hysterical).  However, despite the pizza bagels, Manischevitz spritzers and chocolate covered bacon, the most delightful aspect of the play is the actors. Smith-Croll’s Chef Rossi is as flavorful as her food, spirited and comic in both her snark and buoyancy. Sokol’s Mom gets the best one-liners (“Just like your name, you take a nice Jewish thing and make it Italian,” she tells Rossi of her decision to make pizza bagels). Her snappy, heartfelt delivery of such has audiences simultaneously groaning and longing to embrace their own eccentric mothers. Drama Desk nominee Salazar (The Lightning Thief: The Percy Jackson Musical) reminds audiences why he is a wunderkind of theatre. As DJ Skillit he takes on a multitude of characters (without the aid of costume changes), demonstrating his versatility, charisma, and flawless ease with physical comedy.

John Simpkins’ direction of Raging Skillet is intelligent and accessible. Audiences are one with the story from its first moment, as DJ Skillit and Rossi interact with them while they move through the aisles, chatting, ad-libbing, and distributing goodies in a truly unique experience catered to each crowd. Julian Evans’ sound design is clever, both in the creative music used to color segways between “chapters” of Rossi’s life, and the sound’s construction. Salazar should also be credited with his skillful distortion of voices and sound, formed in view of the audience with an iPad. His embodiment of a DJ is truly all-encompassing! John Lasiter’s lighting is intelligent and creative, especially when coupled with Michael McKiernan’s projection design. Images and icons taken from The True Life Story of Chef Rossi layer eye-popping signage of the book’s title.

LaMarre’s flair for connecting with an audience truly pulls Raging Skillet together for a cohesive story, one that is never flat and consistently threatening to boil over with hilarity. The show’s heart is always immediately beneath its uppermost layer. Whether in a solemn moment DJ Skillit is reminding Rossi that she would be much more boring without her mother’s influence, or Mom is watching her daughter longingly as she leaves her one final time, Raging Skillet will stay with audiences far longer than any of the delicious calories consumed.