Visitors are swept from the subway platforms below Grand Central Station with trains roaring by up to the magnificent grand concourse and its heavenly galaxy, to the bright lights of Broadway, Empire State Building, the Met Museum, Central Park, to Greenwich Village, Wall Street, the Battery, and all the sights in between.

The days of fabulous sets for the weekly stage shows that played between movie showings at the Hall are, sadly, long gone. But today’s provides what must be the largest LED screen(s) in the world. They have such high definition that you feel you are in the picture – that is unless you are seated in the gods.

With its vast size [6,000-seats, orchestra and three balconies] the Music Hall can dwarf the human element. But lighting designer Alain Lortie and especially Moment Factory’s video and projections help solve that by often engulfing the historic eight golden panels [which have been disgracefully mutilated with holes – such an original sin, and one that, hopefully, will be corrected]. 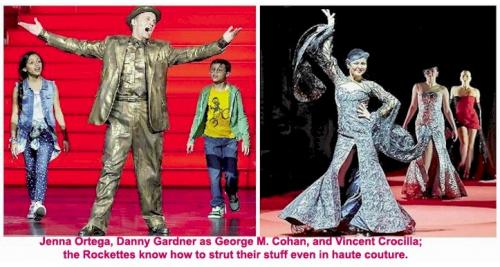 The show, a tightly-paced 90 minutes “about the people, passion, and promise” that make New York City so, well, spectacular, is produced by Colin Ingram and Madison Square Garden [Finding Neverland] for an estimated $25-million. It’s “inspired by the magic and wonder of New York City” and easily lives up to the Spectacular in its title.

It’s a 90-minute, high-energy whirlwind music and dance celebration directed and choreographed by three-time Emmy winner (TV’s So You Think You Can Dance)Mia Michaels (Finding Neverland) with a 28-piece orchestra under music supervisor David Holcenberg; and a so-so story for window dressing by Drama Desk winner and Tony nominee Douglas Carter Beane (Cinderella, Sister Act, ) [on a family vacation to NYC, there’s a parents’ worse nightmare when mom and dad make the express train, but the kids don’t]. 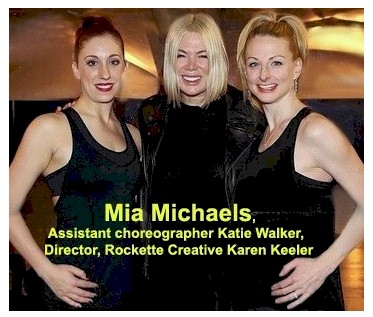 Michaels has dared to bring Rocketttes choreography into the 21st Century with often-inspired new energy. In addition to those rousing high kick routines, there are touches of Bob Fosse, Martha Graham, and Katharine Dunham. In those instances, at first quite jarring, we see the dance troupe is capable of more than just high kicks.

“The Music Hall’s a magical place and the perfect place to create this family spectacle and love letter to the city,” she points out. “There’re a lot of flavors:  elegance, romance, quirky, street, and classical. There’s tap and a few touches of ballet and ballroom. It’s all over the map of New York City! However, the core – the tradition – is the Rockettes brand. I just pushed it a little. I wanted to make it relevant and contemporary.” 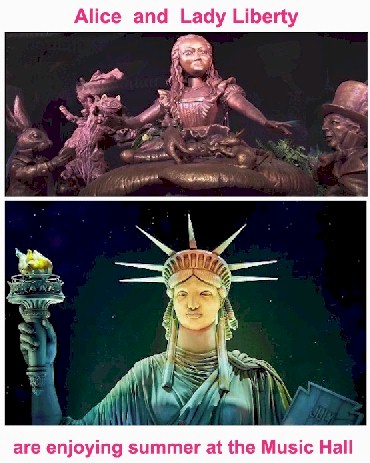 As far as working in legendary Radio City Music Hall, Michaels says, “It’s in its own world! You walk in, and you hear the heartbeat. The architecture, the history – you have to respect the tradition. It tells you what it wants. You listen. In this show, you can see we are in love with New York and want to spread that feeling.”

She also notes that there’s so much to work with: The stage, “which creates challenges in more intimate moments,” the sides of the auditorium, where you can bring the cast closer to audiences. Then, there’re the three elevators that can bring the orchestra and elements of the show up to great heights, the magnificent array of curtains, and the lighting grid.

She’s added a dance contingent of “Rockets,” a troupe of 10 male dancers that add a hip-hop element – and, later, with the large ensemble of singers and dancers [the envy of any Broadway choreographer], a delightful interactive set up and down the Hall aisles. They’re in no way competition for the Rockettes. One routine, set against the stunning backdrop of an animatronic version of Jose de Creeft’s Central Park bronze Alice in Wonderland sculpture and strains of John Lennon’s “Imagine,” sticks out like a sore thumb.

But it doesn’t take long to forget that. Design-wise, you can certainly see where the money was spent. In addition to a lively Alice, there’re animated versions of the Statue of Liberty, talkative New York Public Library lion guardians, Degas’s famed ballet dancers leaping from the walls of the Met and materializing onstage, and a breathtaking floor by floor ascension up, up, up the exterior of the Empire State Building to a top deck shrouded in clouds. And, if you missed the 4th of July fireworks, there’re some here.

Tony (Porgy and Bess) and Drama Desk nominee Emilio Sosa (On Your Feet, Motown; TV’s Project Runway) dazzles with eye-popping costumes for the Rockettes and his haute couture fashion show is a red-carpet event worthy of a standing ovation.

The Rockettes particularly stand out in Michael’s new take on the “Singing in the Rain” number from the Spring Spectacular. It rains as it can only rain at Radio City, with the ladies dashing in yellow slick rain gear with pinkish umbrellas. The splash tap choreography is delightful and gets the audience response it deserves.

There’s music, music, music: Cohan’s “Give My Regards to Broadway,” Al Dubin and Harry Warren’s “42nd Street,” Kander and Ebb’s “Money, Money” (Cabaret), and Madonna and Shep Pettibone’s “Vogue, and” “Empire State of Mind” (which a number of writers contributed to). The finale’s especially tune-heavy: Kander and Ebb’s “(Theme from) New York, New York,” Hamlisch and Kleban’s “One” from A Chorus Line, and, among others, Taylor Swift and Ryan Tedder’s “Welcome to New York.”

Tickets for Radio City Music Hall’s New York Spectacular: the Rockettes are available at the box office, at www.Rockettes.com/newyork, and through Ticketmaster, (866) 858-0007.  Visit the Delta Lounge on the first mezzanine prior to showtimes.