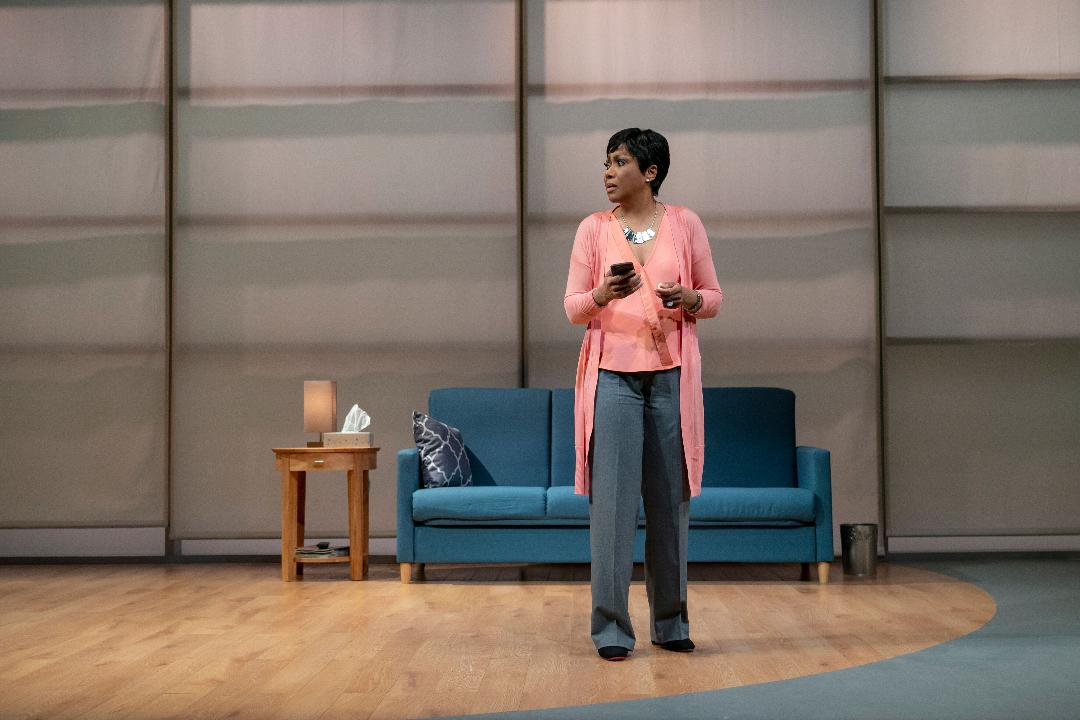 Described by Hutchinson as being “as close as you can get to a WASP while being black,” Constance has been married for over 30 years to Maurice, who’s in a coma after a car crash several days earlier. (The play is at Off Broadway’s Minetta Lane Theatre, and is produced by Audible, a company specializing in digital audio content, which has an Emerging Playwrights Commission arm.)

The scene is an ICU waiting room, somewhere in New Jersey, where Maurice’s curtained hospital bed is placed alongside the stage right wall. Constance, visiting him, uses her time to ruminate on their life as a married couple, their daughter, Madison (called “Maddie” but recently using “Sonny”), the decision she’ll have to make regarding Maurice’s future, and her discovery that Maurice has been having an eight-year affair with another woman, Lashonda, a single mom with three children.

As played with noteworthy naturalness and humor by Brenda Pressley, Constance has a cute pixie cut and wears a fashionable ensemble (by Jen Caprio) of gray slacks, coral top, and gold necklace. She comes from a wealthy family and received an expensive private education. Maurice is a wealthy, self-made man from a lower socio-economic echelon.

This distinction in their backgrounds becomes a thematic motif in Constance’s hour and five minutes narrative, as she considers the class differences that separate her from her husband. She also picks apart the various ways that black people from different backgrounds both share and differ in their attitudes toward various socio-cultural issues.

As staged by Jade King Carroll, the play is never clear regarding to whom Constance is talking; sometimes it seems she’s addressing Maurice, sometimes herself, and sometimes the paying audience. As she wanders about (often, it seems, just to break the monotony) or sits in the incomprehensibly large, modern room, designed by Alexis Distler, unlike any ICU you’ve ever seen, we hear in her discourse reflections of black-related conflicts regarding proper linguistic and behavioral choices.

Constance, for example, is uncomfortable with the kind of ungrammatical, colloquial speech many black people use, including pronunciations like “aks” for “ask.” She’s always correcting people, like Maurice or Maddie, for their errors (which, implausibly, she refers to like an English professor, using terms like “the first-person nominative”).

But, as she debates such things in her mind, what appear to be her guilt feelings about not being black enough tend to move her toward more liberal attitudes; isn’t it enough just to be understood without having to be grammatically correct? Maddie, politically woke, argues that her mother’s correct grammar is a sign of her brain having been colonized. It’s a provocative point that Constance doesn’t really debate. It’s also one of the play’s socially conscious rivulets that provide more background color than they do dramatic substance.

Although she has to contend with her braindead husband and a daughter who favors her father and rejects her mother’s generally white-leaning ways, Constance’s main problem is dealing with Maurice’s mistress, Lashonda. That name, by the way, opens a path for Constance to score some satirical points at the practice of black people calling themselves Lashawn, Ladonna, and so on.

Lashonda is the kind of lower-class black woman that Constance herself stereotypes, especially when she realizes she can have a texting conversation with her by using Maurice’s cellphone. By the time this happens, the play has begun to sink in a sea of rambling verbiage lacking any dramatic thrust.

Lots of time is taken up with Constance’s reminiscences of her courtship with Maurice, of the differences in their upbringing, on how Maurice’s family exploited him, of their loving marital relationship, of Lashonda’s Facebook postings, Maddie’s sex life, and so on.

Some of it clicks but most just floats along until the texting revives our interest, especially as Constance reads both her texts and Lashonda’s by switching from her own more refined speech to the familiar black accent she assumes, from the texts, is how Lashonda would speak. For all its contrivance and self-acknowledged debt to Cyrano de Bergerac, it’s the most amusing part of the frequently ponderous script.

The back and forth forces Constance to question her own value as a wife, and why Maurice would need a woman like Lashonda, but also reveals that Lashonda has much more going for her than Constance originally believed. This is especially notable in a letter Lashonda has written for Constance that, for all its colloquial anomalies, is both eloquent and heartfelt. It’s also extremely hokey and unlikely.

Throughout, Constance talks about the choices she’s made and those she has to make. In the final moments, one last choice presents itself. Constance asks us for our advice only for the lights to go to black before we can respond. The next choice—to see or not to see—is yours.