There’s even a huge illustrated card in the seat in front of you, just like the ones you’re supposed to read before your flight takes off, to help along the luddites. It’s an amusing beginning to an amusing evening, but the overall play is not an in-depth analysis of the ever-increasing and potentially dangerous role technology plays in our lives.

Created by playwright James Graham and director Josie Rourke, the work was previously presented in London at the Donmare Warehouse (where Rourke is artistic director) and revised for this American premiere. The slim premise focuses on an equally slim character called The Writer (played here by Daniel Radcliffe of Harry Potter fame), attempting to be more open with his emotions after a bad breakup. He goes so far as to move from Britain to New York City because we Americans are so outgoing, and also the former lover just happens to have moved there. The Writer equates letting down his guard with joining the social media revolution and his adventures in cyberspace form the slender thread of the plot.

This quest is really an excuse for a combination debate on issues of privacy and demonstration of tech wizardry. Graham and Rourke interviewed dozens of journalists, entrepreneurs, and politicians on the impact of digital media on our lives. Five versatile performers play the the real-life commentators, acting as a 21st Century Greek chorus to the protagonist’s journey as he orders from Amazon, joins Facebook and Twitter, uses ride share apps, seeks romance through dating sites, and even channels a video image of NSA whistleblower Edward Snowden reciting lines from Shakespeare’s The Tempest. (I suppose likening the Bard’s magical isle to the unknown territory of the Internet.)

The audience becomes involved as characters ask us to use our phones to snap selfies, check our ranking as Uber customers, and step on stage to play potential dates for the Writer. Onstage “Research and Digital Associate” Harry Davies and projection designer Duncan McLean create the surprising and entertaining effects. At the performance attended, I heard one woman cry out “That’s my house” as images of ticket buyers’ residences and their estimated worth flashed on the giant screen.

The proceedings are more fun than frightening, even when things turn somewhat sinister as the information gathered from the audience gets twisted into anti-government evidence (at the final curtain, Radcliffe requests we not give away any spoiler details.) The final scenes feel more like Saturday Night Live skits—Rachel Dratch, an SNL alum, is in the company—and the desired chilling effect is lost.

Radcliffe, one of the few child stars to grow into a respectable legit stage actor, does his best to fill in the sketchy Writer. He conveys the necessary heartbreak but the author has created a catalyst for conversation rather than a flesh-and-blood man. The supporting cast has an easier time delivering quick observations and zingers. Dratch, Reg Rogers, Michael Countryman, Raffia Barsoumian, and De’Adre Aziza juggle personae, genders, and accents with dexterity.

Privacy raises numerous important issues about our media-crazed, totally public world but addresses them with parlor tricks rather than serious thought. 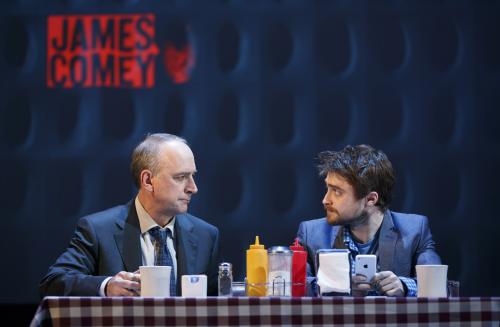 Originally Published on July 23, 2016 in ArtsinNY.com