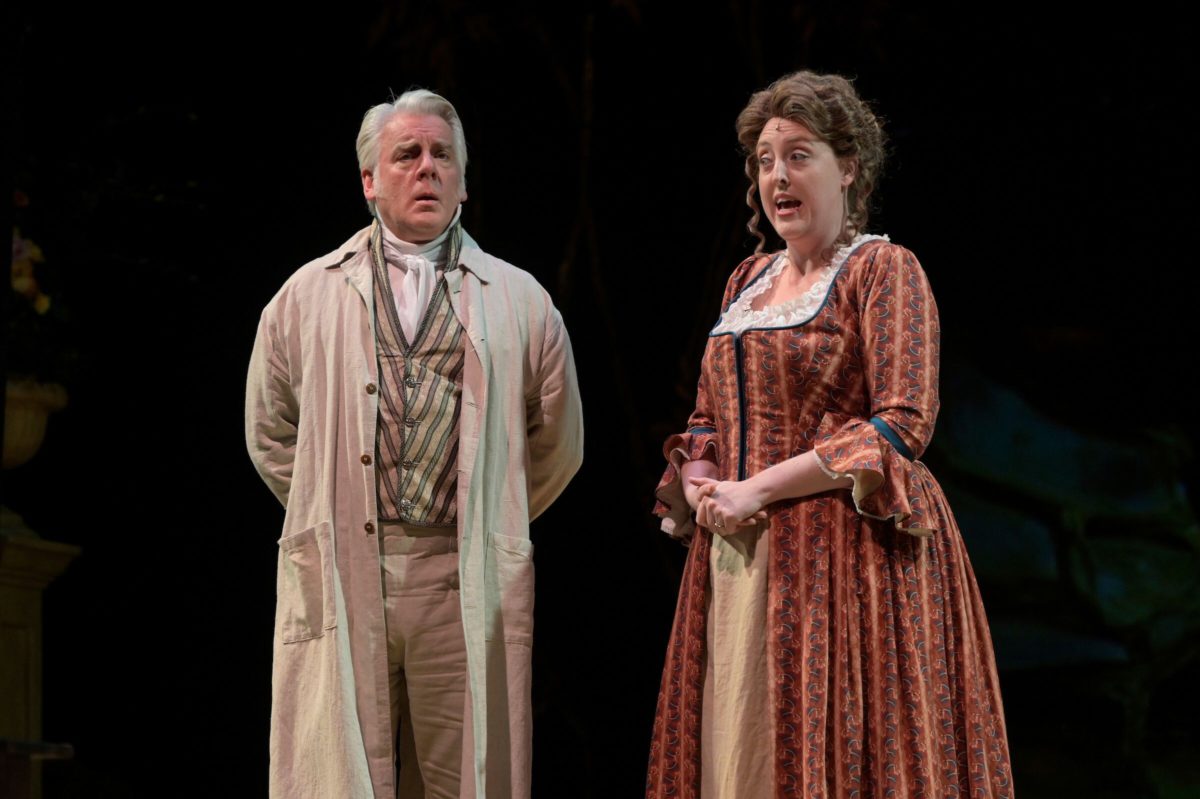 The event was introduced and hosted by Tony nominee Laura Osnes (Rodgers and Hammerstein’s Cinderella), Tony winner Beth Leavel (The Drowsy Chaperone), and Julie James of Sirius XM Live on Broadway and the show is on available on the Streaming Musicals website.

While professional and competent enough under Robert Kelley’s smooth direction, this iteration of Austen’s beloved story of the bumpy romance between independent-minded Elizabeth Bennett and the haughty Mr. Darcy in Regency-era England is only mildly entertaining at best. Gordon, who also adapted another classic Jane Eyre to the musical stage with lukewarm results, mixes generic Broadway and pop sounds and simplistic lyrics in his score, producing pleasant but familiar expressions of the protagonists’ raging emotions under their formal exteriors. Gordon also wrote the book which sacrifices Austen’s revolutionary feminism for the familiar push-pull love story. The novel is indeed the ultimate romantic template with the individualist Elizabeth battling against hooking up with the dashing but snobbish Darcy. Eventually, each conquered the titular failings of pride and prejudice holding them back. But Austen also informed her work with a powerful rage against the patriarchal society in which she lived. Elizabeth is one of five daughters whose family home will be taken from her upon her father’s death because he has no male heirs. Marriage is her only salvation and Gordon’s cheerful, perky book downplays this vital critique of an oppressive environment of Austen’s classic.

The leads have marvelous voices and charismatic stage presence. Mary Mattison is a delightfully spunky Elizabeth and Justin Mortelliti makes for a dashing, disdainful Darcy, but there is very little sexual chemistry between them, a necessary connection if we are to buy Darcy’s irresistible attraction for Lizzie and Lizzie’s gradual falling for him. The large supporting cast includes many lovely vocal performances such as Sharon Rietkirk’s Jane, Elizabeth’s elder sibling who laments the loss of her intended Mr. Bingley in the tender ballad, “A Man of My Acquaintance.” But only Melissa WolfKlain’s deadpan Mary, the bookworm Bennett daughter, and Monique Hafen Adams’ sarcastic Caroline Bingley, emerge as vivid characters.

Several British companies including the National Theater and Shakespeare’s Globe have been videotaping their productions for consumption in cinemas for some time and are now making their archives available on YouTube. The Globe is currently offering their 2018 Hamlet starring artistic director Michelle Terry in the title role. This is not the first instance of a female Melancholy Dane, the most famous being Sarah Bernhardt, followed decades later by Judith Anderson, Diane Venora, Maxine Peake, and Ruth Negga (recently seen at Brooklyn’s St. Ann’s Warehouse). This staging in the company’s recreation of the Bard’s original playhouse goes further by casting not only Hamlet, but also Horatio, Laertes, and Marcellus with women, Ophelia with a man, and Guildenstern with a hearing-impaired actor. The direction by Federay Holmes and Elle While, like that of Pride and Prejudice, is serviceable but not especially memorable. All the boxes of conveying the basic plot and keeping the action moving are ticked, but there are no new insights particularly on gender roles or sexual power dynamics.

Terry possesses the necessary classic technique to sustain a credible Hamlet, but she is all rage and no humor (despite being costumed as a clown during the mad scenes.) Catron Aaron’s brainy Horatio and Bettrys Jones’ sparkplug of a Laertes are more shaded. Shubham Saraf endows Ophelia with delicate strength and Helen Schlesinger gradually adds layers to Gertrude. James Garnon’s Claudius is a vacillating monarch which is an interesting choice. You could read this interpretation as one of female strength (a determined Hamlet, Laertes and Horatio) against male incompetence (a weak-willed, corrupt Claudius), but this concept is not brought out in the direction. This is an intriguing concept, but the full possibilities of a gender-reversed production are not fully explored. The production was performed in repertory with As You Like It with the same actors in cross-gender casting which make for an interesting contrast. Perhaps that show will pop up on YouTube soon.

Additional streaming companies include the National Theater which posts new productions every two weeks (Treasure Island premieres April 16); the Wooster Group on Vimeo; 54 Below with cabaret shows on YouTube; and Theater Wit of Chicago which will stream its production of Teenage Dick (Richard III set in a high school) through May 3. Check the companies’ websites for information.

Pride and Prejudice: Available at StreamingMusicals.com. Buy for $19.99 or rent for $4.99.