Charm and whimsy are the main ingredients in three recent theatrical offerings on and Off-Broadway. Each has its own unique tastes and flavors—one is a reliable old favorite, the second a delightfully frothy new dessert and the third a strangely interesting souffle of emotions, ideas, and observations on modern life. 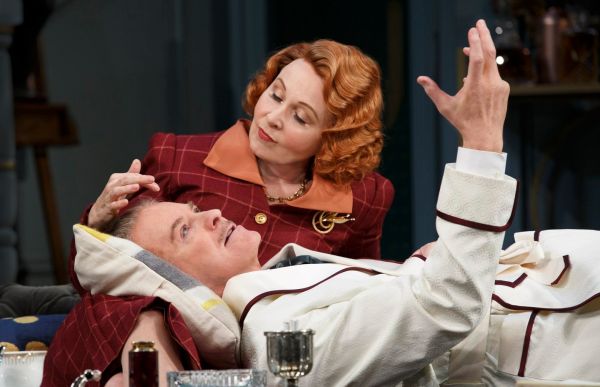 Charm and whimsy are the main ingredients in three recent theatrical offerings on and Off-Broadway. Each has its own unique tastes and flavors—one is a reliable old favorite, the second a delightfully frothy new dessert and the third a strangely interesting souffle of emotions, ideas, and observations on modern life. The most charming and familiar of this trio is Noel Coward’s Present Laughter (1939), an autobiographical romp centering on Garry Essendine, a comically vain British stage star, not unlike Coward himself, as he prepares for a whirlwind theatrical tour of Africa and untangles a web of friends, lovers, and crazed fans. I missed the first two American Broadway stagings with Clifton Webb (1946) and Coward himself (1958) since they were put on before I was born, but I did see it with productions starring George C. Scott (1982), Frank Langella (1996) and Victor Garber (2010). Kevin Kline, still dashing and trim at nearly 70, makes a joyously pompous Garry. He is full of funny, over-the-top bits meant to convey Garry’s inflated ego and tendency to histrionics. Watch as he puffs up like an offended pigeon when accused of overacting or when he stops to check out his thinning hair in front of a hall mirror, even when answering a frantically rung doorbell.

But Moritz von Stuelpnagel’s uneven direction makes this production not nearly as dizzying a knockabout farce as Scott’s self-directed show or the highly sexualized almost-orgy Scott Eliot made of the Frank Langella version. This is more along the lines of Nicholas Martin’s mildly amusing 2010 Victor Garber edition for Roundabout Theatre Company, fun but not wildly so. There are several fits and starts as the comic engine of Coward’s intricately constructed plot warms up in the first act. It isn’t until the hilarious second act when Garry must juggle two lovers, his former wife, a jealous husband, an kooky stalker, and a dignified titled visitor that the action really gets going. After that pinnacle of merriment and confusion, the engine runs down and the evening ends on an anticlimactic note.

The reliable Kristine Nielsen nearly steals the show as Garry’s sarcastic secretary. She matches Kline gesture for gesture and expression for expression. Kate Burton, who made her Broadway debut in the 1982 production as the ingenue (here played winningly by Tedra Millan), returns with dry wit as Liz, Garry’s former, but still loving wife. Ellen Harvey does a delicious deadpan as the chain-smoking Swedish housekeeper. Not quite as successful are Bhavesh Patel (overplaying the nutty adoring fan), Cobie Smulders (lacking allure and passion as the temptress Joanna), and Reg Rogers (using the same Cowardly Lion/Snaggletooth voice he’s employed in numerous other roles). David Zinn’s stylish set and Susan Hilferty’s gorgeous costumes provide the perfect atmosphere for this light entertainment.

Equally bubbly, but with an emphasis on whimsy rather than charm, is Amélie, the new musical based on Jean-Pierre Jeunet and Guillaume Laurant’s 2001 French hit film. The title character is sort of like Garry. She’s a dreamy waitress at the center of an odd assortment of friends, but instead of complaining about their eccentricities, she performs secret good deeds for them. Director Pam MacKinnon proves she is as adept at staging enchanting adult fables as she is at enlivening dramas such as Who’s Afraid of Virginia Woolf? and A Delicate Balance. The Gallic bon-bon features a sweet score by Daniel Messe and Nathan Tysen, a tidy book by Craig Lucas, and an enchanting lead performances by a spritely Phillipa Soo. The boyishly endearing Adam Chanler-Berat makes a sweetly off-beat love interest. A versatile ensemble delivering memorable work includes Tony Sheldon as a reclusive artist, Paul Whitty as a friendly fish and an amorous plumber, Randy Blair as Elton John-like rock star and a struggling writer, and Alyse Alan Louis as a daffy hypochondriac.

Present Laughter’s David Zinn designed the candy-colored costumes and the adorable set suggesting a fantasy version of Paris, lit like a Renoir by Jane Cox and Mark Barton. At a fast 100 minutes, Amélie is a sweet and tasty creme brûlée of a show.

Sarah Ruhl’s awkwardly-titled How to Transcend a Happy Marriage starts out as neither whimsical nor charming. The audience is greeted by the carcass of slaughtered goat hanging over the smart contemporary set designed by (who else?) David Zinn. The first act unravels like a tacky sex farce as two straight couples voyeuristically discuss a charismatic temp worker who lives in a triad arrangement with two men and kills her own meat (hence the animal corpse). They invite the threesome (or throuple) over for New Year’s Eve for bicurious games. Sexual and spiritual complications follow in the deeper second act. The characters gain dimension and the proceedings acquire a fantastic, whimsical—and yes, somewhat charming—tinge as the participants consider the serious consequences of their salacious actions and the tempting temp undergoes a magical transformation. The play becomes much more than a dissertation on the trendy topic of polyamorous arrangements, addressing the very nature of family. Director Rebecca Taichman and an adept cast handle the transition with dexterity, shifting from naughty jokes to existential sorrow to communal joy. As George, one of the straight wives and the play’s confused narrator, Marisa Tomei paints the stage with a palette-full of emotional colors—bright comic reds, deep sad blues, and fascinating purples when they get mixed together. It’s a startlingly affecting performance in a surprisingly effective play which transcends categories.