May 3, 2022: While the ladies of “POTUS:”, the new Broadway comedy portray savvy politicians, it’s clear they wouldn’t make very good doctors. It’s their hysteria at the Prez’s medical emergency that ignites this slapstick comedy. 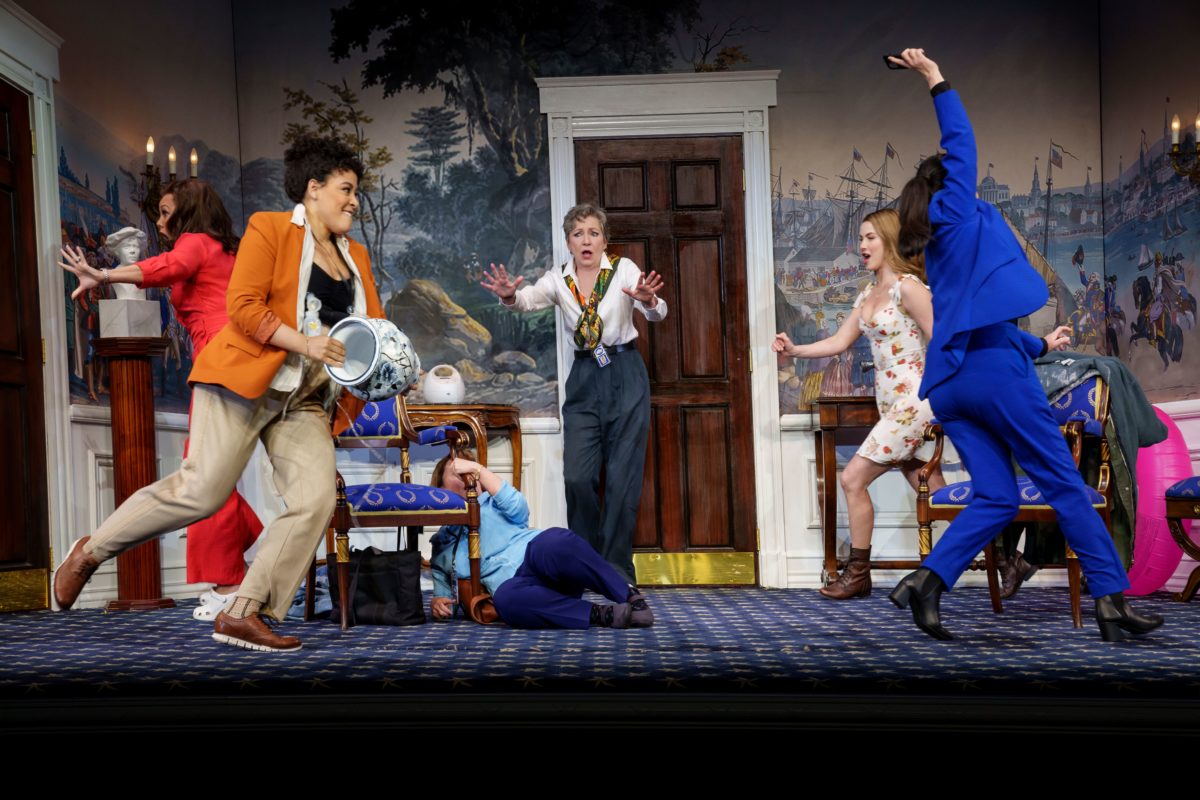 The Cast of “Potus”.

May 3, 2022: While the ladies of “POTUS:”, the new Broadway comedy portray savvy politicians, it’s clear they wouldn’t make very good doctors. It’s their hysteria at the Prez’s medical emergency that ignites this slapstick comedy.

A fast-paced romp, set in the White House, playwright Selina Fillinger’s all woman play delivers a welcome sense of the sillies. Of course, none of the events portrayed here could ever happen. It’s just the antics of these particular women characters taking over the White House that brings a lot of camp fun to the stage.

Most outstanding, Julie White plays Harriet the White House Chief of Staff. Her raspy, grating voice is a wakeup call telling us, Broadway is back. For the Tony Award winning White, comedy has no boundaries. Her pacing is so fast it’s a killer – pardon the pun.

She finds a great ally in “Dancing with The Stars” two-time champion Julianne Hough as the President’s guest…whatever that means. As the pregnant farm girl, she spews purple projectiles, and quickly proves herself to be a kick ass sport on the girls’ team.  That she happens to be as charming as she is defiant, is no small virtue.

It is a diverse cast with Lea DeLaria as Bernadette, the President’s drug-dealing jailbird sister. Suzy Nakamura portrays the officious press secretary, and Bernadette’s lesbian partner. In her blue suit, hair tied back, she’s perfect at playing the straight and narrow. Still, her edgy side turns biting when her confidence feels threatened.

Also, White House reporter Chris, is played by a vibrant Lilli Cooper. Recently divorced and busily pumping breast milk between meetings, she registers a strong sense of reason and truthfulness. But that turns out to be more of her image, than her reality.

Making her Broadway debut, Rachel Dratch (“Saturday Night Live”) as Stephanie the secretary, stoops to the lowest form of comedic shtick, from pulling her pants down, to making sexual advances on Harriet – much to Harriet’s chagrin, of course. Dratch is outrageously funny.

Proving her comedy chops, Vanessa Williams portrays the beautiful, brilliant First Lady, who endures her husband’s recriminating words. In this role, Williams brings a down to earth quality that blends beautifully with this all female ensemble. That they all act like they are having the time of their lives radiates magically.

Helmed by director/choreographer Susan Stroman, the production displays remarkable showmanship. Embracing the play’s humor with improvisational immediacy, Stroman takes no prisoners. That is her style. Old ladies with walkers on the kick line of “The Producers” certainly caught our eye. Black actors performing a minstrel show as they are sped to death sentences in “Scottsboro Boys” brought shame.

Designed by Linda Cho, the costumes are fun to look at, and fashionable. The first lady gets stuck wearing high-heeled Crocks, having received adverse comments about the stilettos she wore when she was working with the poor. Still, a striking red jump suit becomes her. DeLaria has the charisma that only a woman in army fatigues could achieve, and Lilli Cooper appears fashionably urban and comfortable. Only Rachel Dratch really needs a makeover.

A spinning set designed by Beowulf Boritt, keeps the world of “POTUS:” moving, literally. As innovation, it replaces the need for slamming doors in this farce where pratfalls are de rigueur. It’s a timely comedy because they make us laugh.