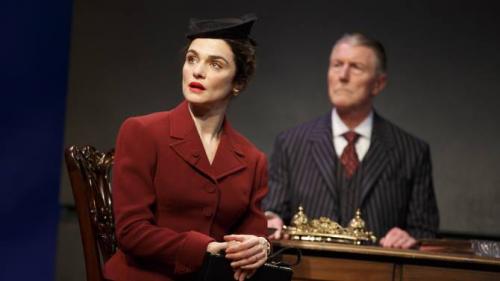 Two Current Off-Broadway Productions provide a 70-year historic overview of narcissistic British behavior and the decline of that country from admirable empire to self-absorbed ruin. David Hare’s 1978 Plenty at the Public traces the crack-up of the  country from World War II into the 1960s through the scattered and destructive choices of its neurotic but charismatic heroine. Mike Bartlett’s 2010 Love, Love, Love at the Laura Pels in a Roundabout staging, picks up where Plenty leaves off, taking us from the mod Beatles era into the 21st century. This work chronicling the tsunami-like romance of Kenneth and Sandra, a Baby-Boomer Everycouple, who destroy everything and everyone in their path and are meant to represent all of the crimes committed by their heedless generation. Both playwrights are angry at their native land and score stinging points, but Hare’s impassioned indictment retains the ring of honest dramaturgy in spite of a less than stellar production while Bartlett’s heavy-handed bash has all the subtlety of a sledgehammer.

Plenty holds a special place for me. The American premiere directed by the playwright at the Public’s Newman stage was one of the first plays i saw when I moved to New York in 1982. Thirty-four years later, I still remember Kate Nelligan’s impassioned, yet calibrated performance as the complicated Susan Traherne, shattered by her country’s postwar banality after serving as a courier in the French resistance. Romanticizing her wartime exploits, Susan stumbles through a series of unfulfilling jobs and relationships,
paralleling Britain’s national identity crisis after losing its position of
world dominance.

Seeing the play in the same theater raises personal memories, but also unfavorable comparisons. David Leveaux’s muted new staging seems to exist primarily as a star vehicle for Oscar winner Rachel Weisz who is in love with Susan’s theatrical breakdowns and takes every opportunity for a diva display. Thus she becomes a weepy victim rather than the
complex architect of her own downfall (as Hare and Nelligan saw her in the
original). Instead of connecting with the character and the situation, Weisz is
saying “Look at me act!”

There are physical sparks between Weisz and Corey Stoll as Brock, her diplomat husband,but no emotional connection, making his self sacrifices hard to believe. The limning and bonds between the cast in Love, Love, Love may be more convincing, but
Bartlett’s script is less so. Like Susan, his protagonists Kenneth and Sandra
are colossal egotists, wrecking lives in order to pursue their individual ends.
Divided into three acts, this dark comedy follows them as they careen from a
summer of free love in 1967 to suburban opulence in 1990 to retired
self-indulgence in 2010. Bartlett has a way with witty, sharp jabs, but, unlike
Susan, his characters are symbols of social and political positions rather than
flesh and blood. (His earlier play Cock suffered from the same cardboard
depictions.) Kenneth and Sandra’s selfish actions lead up to a screaming
confrontation with their estranged daughter Rose. In the third act, she gets to
deliver a big condemning monologue blatantly indicting her parents and their
peers for all of her woes and those of her country. Though Zoe Kazan performs
this speech with honest passion, we can hear the playwright talking instead of
Rose.

Bartlett pushes his creations to fit his political his theses rather than letting them develop organically and consistently. Would Kenneth and Sandra, the feckless flakes of  Act One, become the financially prosperous executives of Act Two? (We never do find out how
either of them make money after dropping their pseudo-hippie personae.) Would
the alcoholic, unreflective Sandra of the entire play suddenly become capable
of responding with self-awareness and insight to her daughter’s harangue in the
show’s final minutes?

Janet McTeer and Liev Schreiber play a similarly combustible duo in another British production. Like Plenty, Les Liaisons Dangereuses had a sensational New York production in the 1980s  (with the sleekly serpent-like Alan Rickman and the luscsioucly lascivious Lindsay Duncan) and this new edition from the Donmar Warehouse must fight the memory of its predecessor. Many critics have given it a thumbs down, finding Josie Rourke’s less ferocious production several grades below Howard Lindsay’s
elegant, intense original. More than a few scribes have also called the
broodingly naturalistic Schreiber miscast as the sleekly artificial Vicomte de Valmont.

But I thoroughly enjoyed this remounting, taking place in designer Tom Scutt’s derelict museum with cast members gradually removing all the discarded art works between scenes, suggesting the decay of the pre-Revolutionary French society which Valmont and the equally malevolent Marquise de Merteuil dominate with their deadly sexual
games. Schreiber is a charming cad whose tasteful veneer hides his brutal
interior. Rourke takes a decidedly feminist approach to the material, staging
Valmont’s carnal conquests for what they are—assaults. She almost makes us
sympathize with the villainous Marquise who says to Valmont she was “born to
dominate your sex and avenge my own.” McTeer gives us even
more cause to identify with her by providing a multilayered portrayal of this
stylish viper. At first she is deliciously evil, playfully enumerating her
principles of deceit with little hand gestures. But this seductive surface
gives way to the needy woman underneath when Valmont genuinely falls in love
with one of his conquests. McTeer drops her silky voice an octave at precisely
the right moment and her small movements become clawing attempts to suppress
her suppressed genuine longings for Valmont. Yes, this is a slow starting Liaisons,
but once it gets going, it burns and consumes.

Finally, the only American play I recently encountered considers the immigrant experience from a decidedly unusual angle. Qui Nguyen’s Vietgone at Manhattan Theatre Club chronicles the refugee journey of his SouthVietnamese parents after the fall of Saigon through a broadly comic lens rather than via the usual noble,
tear-jerking tropes. Rap music, ninja movies, African-American slang, and
Twitter are all added to mix in this crazy collage. It’s broad, tragic, funny,
satiric, and serious all at once in May Adrales’ cartoonish and clear-eyed
production featuring another sizzling star pair—Raymond Lee and Jennifer
Ikeda. 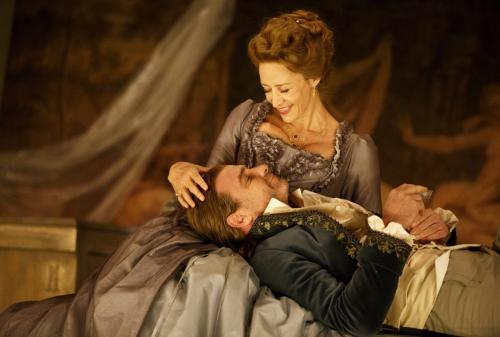 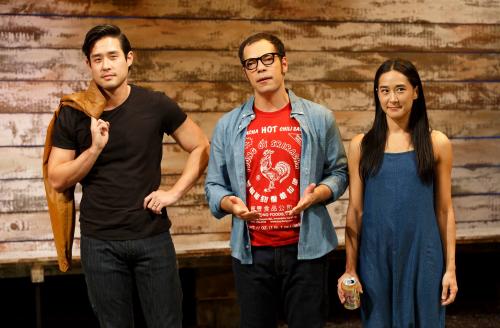