April 3, 2022: Remember Neil Simon’s 1970 movie, The Out-of-Towners, starring Jack Lemmon and Sandy Dennis, where everything that could possibly go wrong on a brief trip to New York not only does, but doubles down to do so? Well, my MTA nightmare getting to and from Broadway for a Saturday matinee of Simon’s Plaza Suite could have inspired an episode in his movie. Not even the king of the one-liners could have made those situations funny. He does, however, manage to provide some laughs for the tired businessman in this revival of his only occasionally tired 1968 hit comedy, Plaza Suite, now at the Hudson Theatre, starring married couple Matthew Broderick and Sarah Jessica Parker, a show delayed two years by you-know-what. 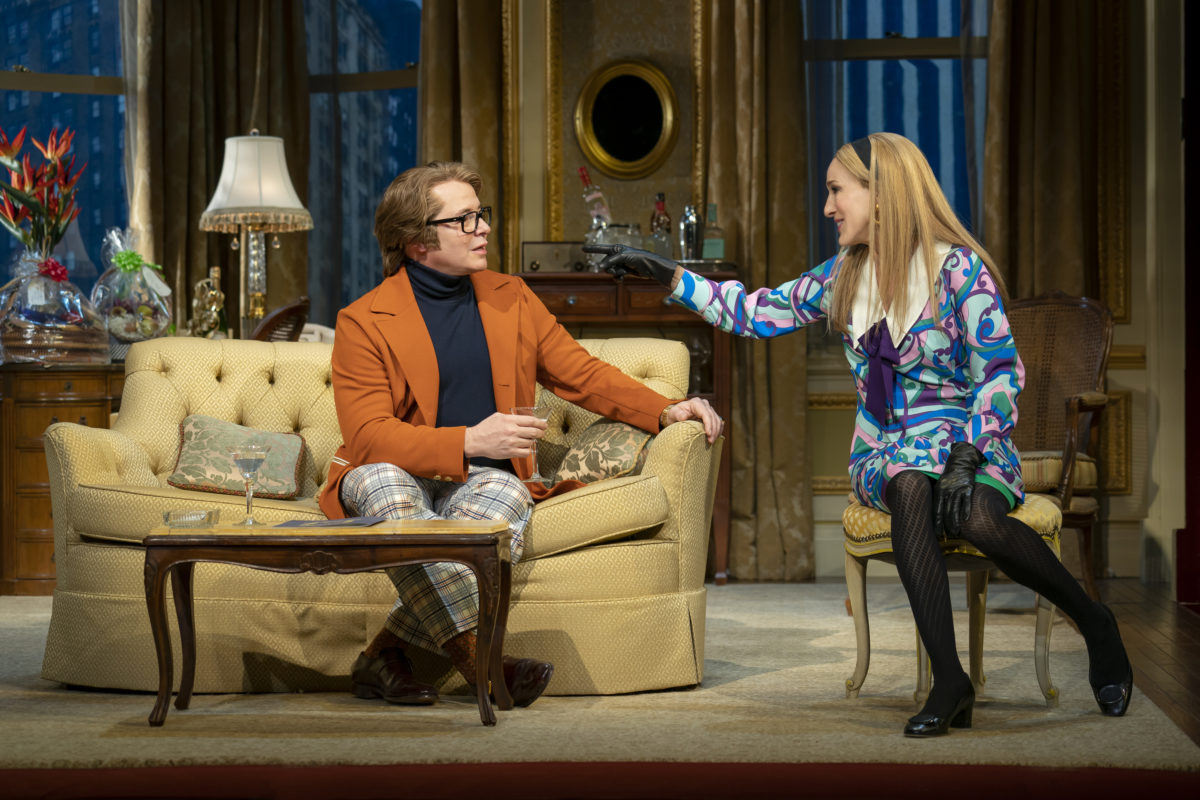 April 3, 2022: Remember Neil Simon’s 1970 movie, The Out-of-Towners, starring Jack Lemmon and Sandy Dennis, where everything that could possibly go wrong on a brief trip to New York not only does, but doubles down to do so? Well, my MTA nightmare getting to and from Broadway for a Saturday matinee of Simon’s Plaza Suite could have inspired an episode in his movie. Not even the king of the one-liners could have made those situations funny. He does, however, manage to provide some laughs for the tired businessman in this revival of his only occasionally tired 1968 hit comedy, Plaza Suite, now at the Hudson Theatre, starring married couple Matthew Broderick and Sarah Jessica Parker, a show delayed two years by you-know-what.

As he did in The Out-of-Towners and in a number of his many stage comedies, Simon finds the humor in fraught marital situations, something he discovered he could do after finding inspiration in his own married life. In the introduction to the first volume of his collected plays, written in 1971, he mentions a fiery altercation with his wife soon after they were married, a tiff that climaxed in her throwing a frozen veal chop that struck him in the head. Instead of striking back, he realized the absurdity of a grown man being hit by a well-pitched piece of mutton, saw his anger dissipating, and was able to view the experience as an outsider looking in on two people who “cared for each other, but were unable or unwilling to yield or submit without first having gained some small vicious victory.”

Something along these lines of nuptial conflict courses through the three one-act plays that make up Plaza Suite, “Visitor from Mamaroneck,” “Visitor from Hollywood,” and “Visitor from Forest Hills.” All are set in Suite 719 of New York’s once premier luxury hotel, the Plaza. Their titles and, for some reason, the year 1969, are projected on the show curtain, dominated by an image of the hotel in its prime. When the curtain rises we see a masterfully recreated replica of the suite, in all its fustian glory, designed by the great John Lee Beatty, and lovingly lit by Brian MacDevitt.

The room remains the same throughout, parlor at our left, bedroom at the right, divided by the merest suggestion of a wall; the principal period props are the telephones. We get a sharper image of the times, however, from the costumes of another Broadway icon, Jane Greenwood, especially those in the second and third acts. In “The Visitor from Hollywood,” she has fun with the overstated hipness of a Hollywood producer, wearing a rust-colored jacket, navy turtleneck, and plaid slacks, in contrast to the swirling op-art patterns of his visitor’s dress. And she tops it all with the over-the-top hat of the mother in “Visitor from Forest Hills,” dolled up for her daughter’s wedding.

Plaza Suite, smoothly staged by John Benjamin Hickey, may be as dated as its critics have been saying, but that doesn’t mean it’s no longer funny, albeit not as funny as the original, which I saw, starring George C. Scott and Maureen Stapleton, and directed by Mike Nichols. The leads play each of the three couples who appear. The late 1960s are close enough for many of us to appreciate seeing the play as a time capsule, reminding us of what things were like not all that long ago but before cell phones and computers dominated our lives. In Act 3, for example, the husband complains about how expensive things are, citing prices that seem ridiculously cheap from today’s perspective. These get laughs Simon didn’t intend, but a laugh is a laugh and a few of these references land.

In “Visitor from Mamaroneck,” Karen Nash, wishing to celebrate her twenty-fourth anniversary, has booked the same room in which she and her husband, Sam, spent their wedding night. Sam, however, is preoccupied with business matters and needs to leave to work them out with his attractive secretary, Jean (Molly Ranson). Karen gets Sam, obviously having a midlife crisis, to admit he’s having an affair with Jean, and is even ready to forgive him, but he goes off nonetheless, leaving her to lick her wounds. Few laughs arise, but be patient for what follows after the intermission.

In “Visitor from Hollywood,” Jesse Kiplinger is a successful Hollywood producer from Tenafly, New Jersey, in for a brief business visit to New York. He’s invited Muriel Tate, a high school girlfriend, to visit, hoping for a roll in the hay. The still beautiful Muriel’s playful resistance to Jesse’s seduction gradually crumbles, partly because she’s obsessed with celebrity culture—the movie star names mentioned are part of the time capsule syndrome—and partly because her marriage is dissolving.

And in “Visitor from Forest Hills,” Norma and Roy Hubley, he in tails, she in flowery dress and broad-brimmed, floral hat, are preparing for the wedding of their daughter, Mimsey (Molly Ranson), to Borden Eisler (Eric Wiegand). Mimsey, however, has locked herself in the bathroom and all the screaming, cajoling, reasoning, door-kicking efforts in the world—not to mention Roy’s attempt to sidle over to the bathroom window while battling pigeons in a thunderstorm along the seventh-story ledge—cannot get Mimsey to emerge. Finally, Borden is sent for, he says two words (which I have never forgotten), and the wedding is back on.

While the power dynamics in male-female relations may have shifted over the years, there’s nothing inherently strange or distant in what happens in Plaza Suite. Such things still happen, or at least seem plausible enough, no matter how heightened for comedic purposes. In 2022, though, plays, even Broadway plays, always seem to have some deeper agenda. Even comedies need a unique gimmick to make their mark. It’s hard when watching Plaza Suite not to wonder why this particular play was revived, and what it wants to say about the world we live in of which we need to be reminded.

The only answer is that laughter is its own excuse. If the presence of two charismatic stars tickling our funny bones succeeds in making us forget the world’s troubles, then that should answer all questions. Personally, I found less to chuckle at in this production than the audience at large. Perhaps you too have been to a show where the audience periodically erupts in loud hilarity, but everyone seated near you is silent. Well, that was me at Plaza Suite.

And, of course, there’s the chance to see those charismatic stars. Mr. Broderick and Ms. Parker are both very popular—as their entrance applause and curtain calls demonstrate—but neither is perfect casting. They have polished comic chops, their timing is precise, and they’re adept at physical clowning, but they only rarely hit the notes of vulnerability and pathos when those are needed. Mr. Broderick has a lovable, Teddy Bear demeanor, no matter how he changes his wigs, costumes, and accents. Ms. Parker has to overcome her innate glamor and adorability. Both are weakest in the most serious play, “Visitor from Mamaroneck,” and at their best with the broader comedy, even farce, of the other plays.

What made Scott and Stapleton so good was their inescapable earthiness, the demons that pursued them, including alcohol, and the emotional ferocity of their personas. Seeing that lion and lioness of the stage play against type in light comedy and farce created an indelible impression I’ve never forgotten, even after fifty-four years. I may be wrong but I doubt someone seeing a revival of Plaza Suite in 2076 will remember Mr. Broderick and Ms. Parker’s performances as vividly, if at all.