Based on A Shady Lady Zoom Lecture by Edith de Belleville

February 7, 2022: “According to artist Pablo Picasso (1881-1973), there were only two types of women – goddesses and doormats. We’re going to talk about how women influenced his art,” host Edith de Belleville begins. Pablo Ruiz (he changed it to Picasso after his mother’s name) was born in Malaga, Andalusia to a middle class professor/realistic painter of birds and game and a housewife mother. According to her, the child’s first words were “piz, piz”, a shortening of lápiz, the Spanish word for “pencil.” Art lessons with his father began at age seven. 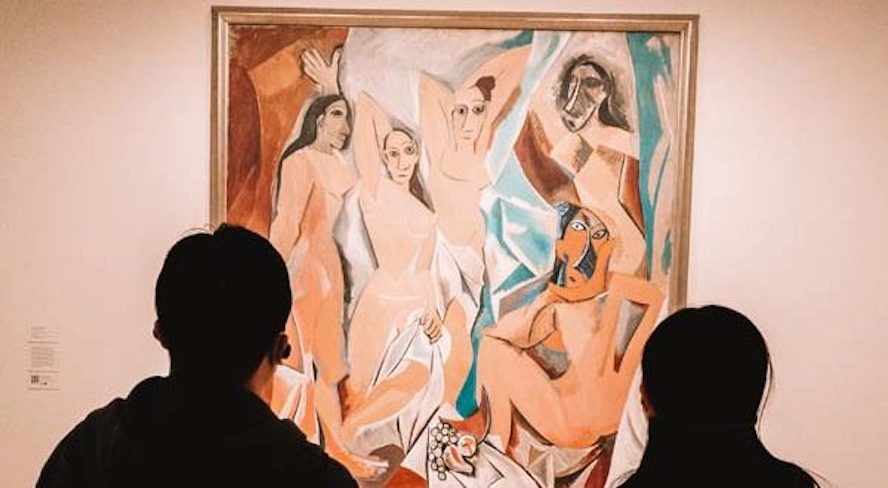 Based on A Shady Lady Zoom Lecture by Edith de Belleville

February 7, 2022: “According to artist Pablo Picasso (1881-1973), there were only two types of women – goddesses and doormats. We’re going to talk about how women influenced his art,” host Edith de Belleville begins. Pablo Ruiz (he changed it to Picasso after his mother’s name) was born in Malaga, Andalusia to a middle class professor/realistic painter of birds and game and a housewife mother. According to her, the child’s first words were “piz, piz”, a shortening of lápiz, the Spanish word for “pencil.” Art lessons with his father began at age seven.

The family moved to Barcelona where Picasso got into the Academy of Fine Arts at 13 years old. Three years later, he matriculated at the prestigious Real Academia de Belles Artes de San Fernando. Ahead of his peers and impatient with rules, he shortly went out on his own.

Picasso’s first trip to Paris was in 1900. For four years he togged back and forth from there to Barcelona immersed in what we now refer to as his “Blue Period,” – bleak paintings in blue or blue/green often with emaciated figures. Color and style are often attributed to the death of his best friend Casagemas who went to a café to shoot his lover in a jealous rage and turned the gun on himself. “He was in love with a French woman,” comments de Bellville. “Be careful of French women.”

In Paris, Picasso met a 23 year-old artist’s model he nicknamed La Belle Fernande, (Fernande Olivier 1881-1966).  Having fled a brute husband, she arrived in Paris under an assumed name. They were living together within a year. Blue turned to rose color as his mood became optimistic. Circus performers appeared as subjects. Over their time together the artist would paint 60 works of Fernande.

The couple lived in abject poverty without running water or heat. Fernande apparently “taught” Picasso – i.e. insisted upon hygiene. Montmartre was the center of Parisian artistic/bohemian life, yet still the countryside. There were goats and cows in the streets. When he left the apartment, the artist locked Fernande in so she couldn’t model for anyone else. The relationship was tempestuous. It was during this period, Picasso discovered cubism. The sculpture Head of a Woman and one of the Demoiselles d’Avignon were inspired by her.

Like many her age, Fernande longed to be a mother. She adopted 13 year-old Raymonde, but returned her to the institution when she discovered explicit drawings Picasso had done of her. Shades of Woody Allen. Picasso was highly favored by influential collector/writer Gertrude Stein. As he gained reputation, he grew bored with his lover. They separated in 1912. Still married to her husband, Fernande had no rights. She was a cashier and gave drawing lessons. Twenty years later, despite Picasso’s legal efforts to stop it, she wrote and published  Picasso et ses amis (Picasso and his Friends). I can find no translation of the book.

Two short relationships followed. Marcelle Humbert, whom he renamed Eva Gouel had tuberculosis. She was fragile, slender, and sensitive, the opposite of Fernande. Her image was often associated with musical instruments like the guitar. Picasso called her “Ma jolie.” In fact, he wrote “Ma jolie” at the bottom of Femme a la Guitare and Architect Table – as if dedication. Overlapping Eva was Gaby Lepsinasse, the wife of an American painter. Gaby had dark eyes and a Lulu haircut with thick bangs. Her existence was revealed by Picasso’s preeminent biographer John Richardson.

Next came Olga Khokhlova, a dancer in the Ballet Russe. When the artist started courting, the company’s impresario/ director Serge Diaghilev told him, you don’t have an affair with a Russian woman, you marry her! And wed her he did, in a Russian Orthodox church. Picasso must’ve been very sure of Olga as there was a marriage settlement where his paintings were to be divided equally between them.

Economics had appreciably improved. Olga set about creating a luxurious home in what was now the center of modern art. “Henry Miller said the crossroads of Montparnasse was the navel of the world,” de Belleville quotes. The couple had a car with a driver and a chef. Picasso’s studio occupied an entire floor. He carried a gold watch and indulged in some bespoke suits. When the artist was 40 and Olga 30, she gave birth to his first child Paolo. Portraits of Olga show a woman with straight nose and thoughtful sobriety. They seemed happy.

One day on the street, Picasso approached tall, athletic, 17 year old blonde  Marie-Thérèse Walter with the suggestion he’d like to paint her portrait. “We’re going to do wonderful things together,” he said. “I don’t know if this would work now, but at that time, it was quite efficient,” the host notes. He was 46, she was a virgin. In order to keep the young woman in his life, Picasso bought her a large house in Boisgelou (Normandie). It’s impressive to look at, but at the time had, according to de Belleville, neither heat nor hot water and next to no furniture.

Picasso honed in on Dora Maar in the café Les Deux Magots. The host tells us she was plunging a knife between her splayed fingers into and out from the table. “Picasso was excited. What a woman!” de Belleville says. Dora was a well known photographer, friend to Man Ray and Brassai and mistress of surrealist author Bataille. She was just the kind of fiery personality to which the artist was intermittently drawn. (It would be interesting to learn whether every other woman was a rest.)

In order to keep her at home where she’d be useful, Picasso convinced the naïve young woman to trade photography for painting. “She was a gifted photographer and a bad painter,” de Belleville comments. Dora knew he was unfaithful. This lover did something important. The bombing of Basque town Guernica during the Spanish Civil War was a case of civilians killed by a military air force, a ‘war crime.’ Dora told Picasso he had to do something. The result was the iconic anti-war painting Guernica.

Overlapping Dora, 21 year-old Francoise Gilot met Picasso when he was 40 years her senior. The artist left his seat with Dora, crossing a café to introduce himself. Evidently Francoise paid little mind while her impressed girlfriend talked. Still, she was an aspiring artist and an invitation to the master’s studio meant a great deal. “They say he could’ve seduced a chair,” our host quips. This meeting and their relationship is entertainingly depicted in the film “Surviving Picasso” with Anthony Hopkins as the artist. She would be the only woman to walk out and triumph in her own productive life.

When Picasso left her, Dora Maar went mad and ended up in an institution. He made the gesture of buying her a home of her own, but she continued to cry, rail and accost her successor in the street. Picasso was the center of her universe. After his death, she hanged herself. Four years later, Marie-Therese followed suit. “He destroyed women,” de Belleville comments.

With Francoise, Picasso had two more children Claude and Paloma. She stayed with the artist ten years during which she not only facilitated his complicated life but amazingly kept up her own work. “When Francoise lost her grandmother, he would not let her go to the funeral. She said enough is enough and walked out with the children.” As she was an artist and he so influential, the single mother fled to The United States. She would eventually write several books including, with Carlton Lake, Life with Picasso and with Malte Herwig The Woman Who Says No which the artist unsuccessfully tried to stop. Francoise married Luc Simon and then Jonas Salk, continued to paint, and turned 100 this year. One recalls Gerald Murphy’s advice, “Living well is the best revenge.”

The last woman in Picasso’s life and his second wife was Jacqueline Roque whom he met when she was 26 and he 72 years old. He brought her a rose a day for six months until she agreed to see him. They lived together marrying eight years later. De Belleville tells us, “She called him Maitre- Master, saying ‘You don’t make shade for sunshine.’” They moved to a house in Cannes where she gave him a peaceful 11 years until his death. The artist created over 400 portraits of her.

Jacqueline was jealous of Picasso’s children and ultimately prevented them from attending his funeral. The artist’s grandson was so distraught, he drank bleach and died three months later. As he never wrote a will, a multitude of lawyers got rich on suits and countersuits. She committed suicide at 59, thirteen years after his death.

Edith de Bellevillle is a charming lecturer with great empathy for her subjects. Pictorial accompaniment is excellent. I look forward to future lectures. As she had a finite amount of time, I embellished her talk with salient and/or colorful details.

Parisian native Edith de Belleville was an attorney at law for many years, but her passion for Paris and its history led her back to university (at the age of 50) to get her official tour guide license. Deeply inspired by Parisian women of the past, Edith decided to write a book, in French, entitled ‘The Beautiful Rebels of Paris’ (Belles et Rebelles, Editions du 81 ). Alas not yet translated into English.