November 14, 2022: In The Book of Broadway Musical Debates, Disputes, and Disagreements by Peter Felichia (Globe Pequot/Applause Books; SRP $27.95, e-book $26.50; 366 pages/trade edition; 15 photos; Index) he purposely means to start arguments and to settle them – all in good fun, with Filichia’s (sometime) sarcastic humor and tongue-in-cheek comments very much intact. Never has his wit been shaper. 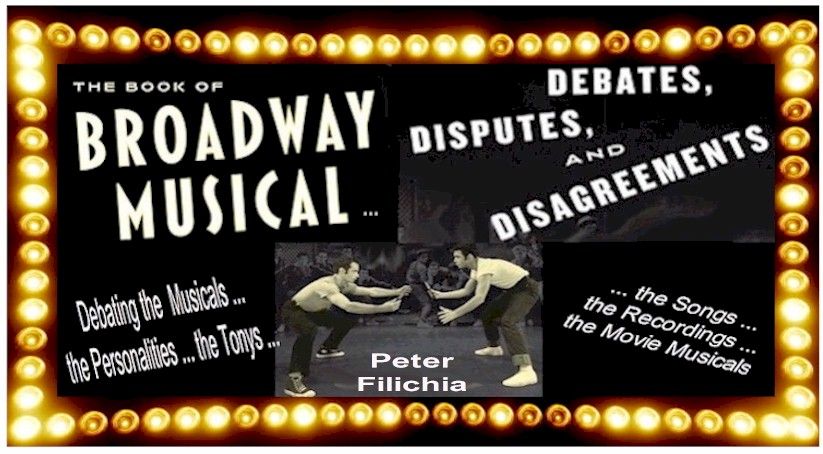 November 14, 2022: In The Book of Broadway Musical Debates, Disputes, and Disagreements by Peter Filichia (Globe Pequot/Applause Books; SRP $27.95, e-book $26.50; 366 pages/trade edition; 15 photos; Index) he purposely means to start arguments and to settle them – all in good fun, with Filichia’s (sometime) sarcastic humor and tongue-in-cheek comments very much intact. Never has his wit been shaper.

This is a book every serious theatergoer will want to have. It’s an easy, relaxed read. You can pick it up, participate in the games; then, put it down and come back when you wish. Filichia also provides an endless font of information for trivia games. In addition, he brings up names, great talents, from long ago, and salutes them. The great thing about Broadway is that every season for decades has something really special to remember that maybe has been forgotten. The Index will be a helpful tool when you wish to compare notes on specific stars and shows.

In a brief interview, Filichia’s secret to his enclopedic memory was revealed. Probably one of America’s most avid theatergoers – he will literally chance going to see anything anywhere that is humanly reachable, he’s been keep note books on shows, stars, producers, sets, costumes, scores, and opinions since grammar school. “They have proved very helpful here,” he states. He’s also a fan of Jim Caple and Steve Buckley’s 2016 The Best Boston Sports Arguments: The 100 Most Controversial, Debatable Questions for Die-Hard Boston Fans, “which was the kind of book I wanted to do.”

It’s not often that Filichia, a longtime theater critic and lover of anything theater-related is truly negative. This is not to say other theater lovers will always agree. And now, as he shoots off his opinions faster than speeding helicopters, falling chandeliers, and cell phones ringing (always in a show’s quietest moment), those who disagree can have their revenge. But isn’t the best part of serious theatergoing the drama and conflict?

An excellent asset of The Book of Broadway Musical Debates, Disputes, and Disagreements is you get tidbits along the way from numerous shows even the oldest among us saw or those never seen. It will lead to lots of searching the Broadway database.

Theater opinions are never in short supply, but hear they’ve given by one of the definitive experts of the trade and that expert welcomes you to agree or disagree. So, in Chapter One’s Debating the Musicals, what would your response be if a time machine could take you back, back, back, What Musical Would You First Return to See? Filichia offers three, and then chooses the one he make a beeline to the box office – and goes into detail why.

What would you say when asked, “What’s the greatest opening number of a Broadway musical?” Will your answer be “The Circle of Life” from The Lion King, “Heaven on Their Minds” from Jesus Christ Superstar, or “Beautiful Girls” from Follies?

Questions that’ll add to the fire even among closest friends or theater mavens are:  “What song from a musical is the most beloved?” and “What’s the worst song that a Broadway musical ever inflicted on us?”

In the Debating the Musicals chapter, you will certainly enjoy Filichia’s spin on “What Was Broadway’s Greatest Special Performance?” Robert Preston’s name pops up again. And will again when a list of major stars turned down a role that defined a career.

Will you agree with his quite aurprising answer to Whose Broadway performance in a musical was later best captured on film? Did you immediately think of Robert Preston in The Music Man or Barbra Streisand in Funny Girl? But that’s not all, folks!

Expect more reading fun from Peter Filichia next year with the launch of his book Brainteasers for Broadway Geniuses.

An excerpt from The Book of Broadway Musical Debates, Disputes, and Disagreements:

June 17, 1937 – The Cradle Will Rock by composer/lyricist Marc Blitzstein; director, Orson Wells; producer John Houseman ~  Maxine Elliot Theatre, 109 West 39th Street: “The Works Progress Administration Federal Theatre Project has been shut down and shut down by the Feds. They’re literally padlocked the theatre’s doors … They’ve found the show too anti-government, anti-capitalistic, anti- religion …
Under these dire circumstances, most producers and directors would say “The padlocks are on our wrists as well as the doors” … They’ll just have to find another theatre, that’s all.

But even if they do, how can the show go on? The fifty-nine cast consists of those who are in actuality government employees, and they’re not allowed to perform on stage. [Actors Equity agrees.]
Houseman and Welles circumvent that dicate with an ingenious loophole. If the actors are merely seated in the audience and stand when each is scheduled to speak or sing, they won’t “perform on stage.” [Lighting designer] Abe Feder will shine a spotlight on each individual when he or she starts a line or dialogue or a song ,,,
While Houseman searches for a house, [production manager] Jean Rosenthal ,,, is sent to find a piano … The Venice Theatre on Seventh Avenue and West 58th Street has been engaged … One hundred or so theatergoers (form) a veritable parade as they walk twenty blocks uptown to see this new work … Their numbers swell to about twenty-five hundred … There’s not an empty seat and plenty of standees.
Blitzstein begins playing and singing. Imagine the pressure on Olive Stanton, who has the show’s first words. Will she stand and sing them? Actresses with lesser fortitude wouldn’t have had the courage to rise on cue, for they’d be fearful that the law would arrest them … (She) stood, sang, and set the tone for all to follow suit, each standing when the time came to perform. The result was a unique night in musical theater history … “

Original Story recounts his life – interrupted far too often by his bi-sexual escapades – and career over five decades of the pugnacious Tony winner and Oscar nominee Arthur Laurents, the beloved and despised author, playwright, screenwriter, and director.

Plays include: The Home of the Brave, The Bird Cage, The Time of the Cuckoo, A Clearing in the Woods, and Invitation to a March; musical books include: West Side Story, Gypsy, I Can Get It for You Wholesale, Anyone Can Whistle, Do I Hear a Waltz, Hallelujah, Baby!, and La Cage aux Folles; film scripts include Rope, Home of the Brave, Anna Lucasta, Summertime (The Time of the Cuckoo), Bonjour Tirstesse, West Side Story, Anastasia, The Turning Point, The Way We Were, and Gypsy. This doesn’t include hit TV originals and adaptations.

Laurents tells of his trials, failures, and successes. He’s not shy of vendettas, always mentioning names. The good collaborations were with Sondheim,  Bernstein, Jule Styne, and Hal Prince. The loves were with so many, and include Farley Granger, Lena Horn, and the actor who became his longtime cherished lover, Tom Hatcher. There are stories of his dealings with Hitchcock, Merman, Bernstein, Robbins (whom he loves one moment, hates the next), Hepburn, Streisand, Lansbury, Lee Remick, Richard Rodgers, and scathing stories of producers he did battle royal with.  He also digs deeply about his trying to hide his homosexuality – and does a pretty good job of it. However, even while denying it, he manages to bed every handsome, blond male that walks by.

He can be brutally honest, as he is about the film adaptation of The Way We Were, from his novel. Today, we think of it as a multi-generation classic, but it was harrowing ordeal of egos and villains a plenty. Even Redford and his beloved Streisand don’t escape unscathed. To boot, he immensely disliked the film.

Laurents came on the scene very young, was befriended by Chaplin and the likes of Norma Shearer and Gene Kelly, of whom a not-so-flatting picture emerges (seems his ego was stronger than the author). As he climbs the ladder, not always being treated fairly, he’s good with praise and the shiv. No one expected even Hollywood of the 30s and 40s to be divine, but what Laurents reveals is quite shattering – if, as more than one person he knew says, it’s true.

It’s also noted that a month before his death in May 2011, age 94, he gave his blessing for a new screen adaptation of Gypsy to star Streisand, produced by Joel Silver.

Mainly on Directing is absorbing reading as Laurents goes into great and provocative behind-the-scenes detail on how his musicals developed and made it to the stage.

In The Rest of the Story, Laurents not only re-evaluates his life/career, but adds more vendettas and completes stories with details he chose to omit.

When did Laurents know Streisand was a star? At her audition for what would be her Broadway debut, the 1962 musical I Can Get It for You Wholesale, by Harold Rome and Jerome Weidman, he recalled her awkward entrance onstage with sheet music falling and leaving a trail behind her. Then, very embarrassed at her clumsiness, Streisand began taking her time picking them up. All set to sing, she loudly asked stage manager May Muth for a chair. She was going to sing sitting down. In the chair, rehearsal pianist Peter Howard waiting for her cue, she seemed to be having a panic attack. She then pulled the gum she’d been chewing furiously, and popped it under the chair.

In that moment, even before Streisand sang, thought Laurents: “I knew she was a star.” Veteran casting director Michael Shurtleff, seated next to Laurents and observing his excitement, nudged him in silent agreement. She sang Harold Arlen and Tumanr Capote’s “A Sleepin’ Bee” from House of Flowers and got the job — and stopped the show with her rollicking rolling around the stage in a chair singing “Miss Marmelstein.”

From The New York Times, 2011 – Lin Manuel Miranda states: “Arthur was a complicated man who leaves behind a complicated legacy. He could verbally decimate something (or someone) when his opinion wasn’t positive, but when he was moved, the tears burst forth easily … In the end, his work — full of complicated, unforgettable characters — will outlive us all. “

Composer Mary Rodgers (Guettel) in SHY: The Alarmingly Outspoken Memoirs of Mary Rodgers , with Jesse Greene, when asked by a reporter to comment on her longtime friendship/association with Laurents, she replied, “Call me when he’s dead.”  The reporter did. She still refused to comment. Their association, bookmarked by her love of their close friend Sondheim, was rocky, indeed. She’s not especially kind to Laurents – with good reason.