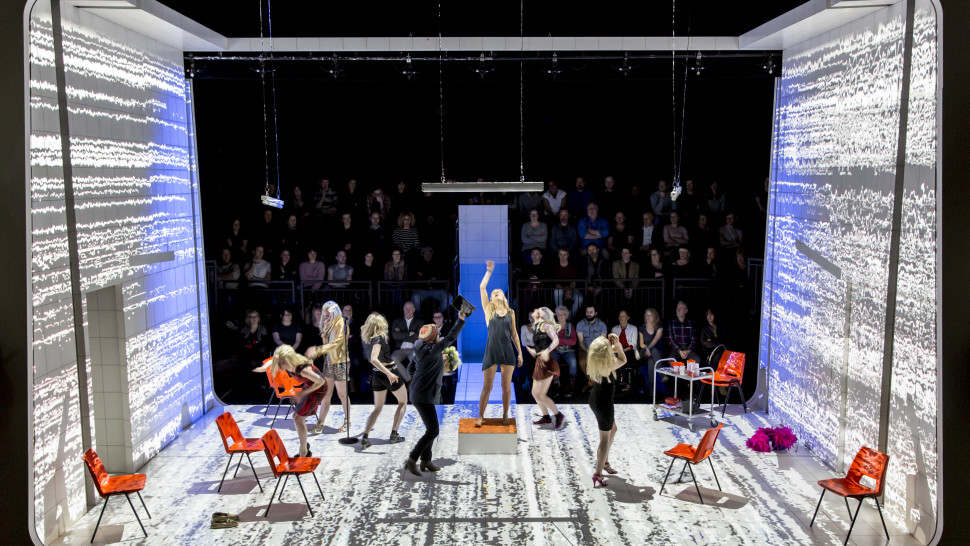 Reprising her Olivier Award-winning performance as Nina/Emma/Sarah/Lucy – one woman, with a lot of heavy baggage to work out, Denise Gough gives an emotionally wrenching performance.

Indeed, playwright Duncan Macmillan is no stranger to disturbing audiences. His adaptation of George Orwell’ s 1984, recently imported to Broadway, was considered too violent to watch, by some. Directly the opposite, his play, Every Brilliant Thing, is a triumph, in which the performer engages the audience in the power of positive thinking.

This piece is a kind of coup de theatre, in which the actors work through their addictions in 12 Step programs, and through group therapy. It is truly psycho drama that they create. And, indeed, the production, framed around the central character, an actress whose stage name is Emma, delights in taking meta-theatrical turns and twists that throw devilish hooks our way.

The play opens with an adaptation of Chekhov’s The Seagull, in which Emma plays an overly dramatic Nina, swooping around with her arms, like wings. Just as she is about to fall off the stage, the stage manager grabs her; the dresser cleans her bloodied face; she imagines a man standing under a street light; she thinks she’s in a nightclub. A repetition of sounds – gun shots included, flashing lights, and strange characters emerge. Emma is standing in the reception area of a rehab center.

Watching Emma’s drug-addled psyche come to life, we see her reflection in the six actresses who mirror her hallucinating mind. Literally pouring themselves through walls, contorting, reviling themselves – Polly Bennett’s choreography is eye popping.

Directed by Jeremy Herrin, there is a visionary quality to the staging. And the surrealism, rooted in the reality of the drug addict’s mental life, is mesmerizing.

As Emma, now Sarah, grows involved in facing herself, and her addictions, the audience sees its mirror image as well. For most of the play, we are looking into ourselves, as the audience is raked, from the stage floor to the ceiling, on either of the stage, which sits in the middle.

As jarring as the drug addict’s life is, Herrin and his designers (Bunny Christie, Tom Gibbons, Christina Cunningham, Andrzej Goulding, and James Farncombe) create a real-time experience that is ajar of traditional theatricality. And while the nature of the storytelling here is issue driven, and not at all symbolic, or even subtle, the consummate artistry of the National Theatre/Headlong collaboration takes it to another level.  Wildly imaginative! And even more satisfying to see how treatment succeeds.