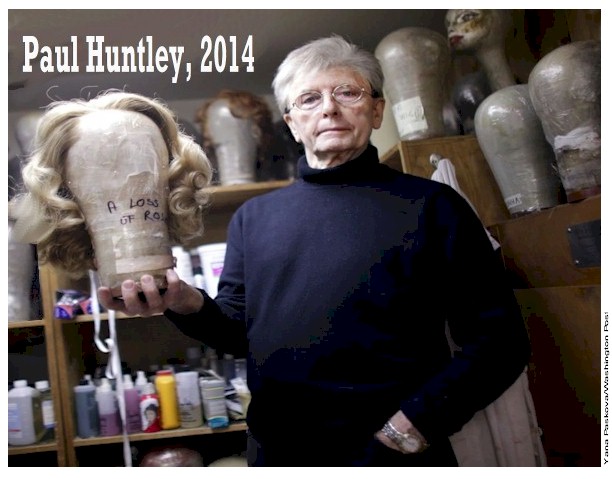 In over 50 years, he created his magic for the actors in over 260 Broadway productions. There were also designs for over 60 movies; regional theater; and TV. Because of the 2020 pandemic and beyond, there were no shows. After a bad fall and hip fracture, he decided to sell his Upper West Side townhouse and studio and returned to London, his home town.

For over 20 of those years, Huntley shared his home with his partner and business associate Paul Plassan, who died in 1991.

Huntley was born into a working class family. As a youngster he delighted in checking out the photos and styles of the top screen actresses in his mother’s magazines. Huntley, whom I interviewed in 1970 and often visited, he stated, “I had this burning desire to become an actor. After army service, I went to drama school; then, worked in rep. Starting out, I worked behind-the-scenes, often in wig departments. I felt much more creative, and it was lots of fun.”

Huntley came to Broadway in the 70s with a reputation from the West End and in film. “I was in my forties,” he said, “and had worked with the giants of British theatre — Gielgud, Olivier, Leigh, Richardson, Guinness, Redgrave. That was an era we’ll never see the likes of again.”

One of his first Broadway designs was for Marlene Dietrich for her one-woman show at the Lunt-Fontanne. “By then, she was a product of her films,” he says. “Onstage, she created magic in this incredible and gorgeous mold of a gown. It was all illusion, but it worked beautifully. She was so professional, never difficult. Marlene knew exactly what she wanted.

“That’s been my experience working with most stars,” he added. “They’ve seen their face photographed and lit from every conceivable angle. They know. It’s an instinct. It’s like when they’re onstage. They know their mark when they feel the warmth of the key light.”

Huntley’s first Broadway show as a solo designer was the 1973’s revival of Uncle Vanya, co-starring Lillian Gish as nanny Maryina. Miss Gish told him, “‘Darling, I’m much too young for the part. You’ll have to age me.'” She was 80 but, notes Huntley, “looked much younger and had hair like silk. She was elfin like, so I worked up something old and crotchety.”

A fan Huntley created a wig for said she was astonished at his artistry when she couldn’t tell the difference. “It really was me, or rather my character. I was in tune and only my wig designer knew – and the producer who paid the bill.”

Many stars, for instance Elizabeth Taylor and Patti LuPone, had it in their contract that they couldn’t do the work unless they had Paul Huntley do the fittings and design. He was quite honored.

Huntley spoke of few bad experiences, and had no desire to write a tell-all. “I’d never divulge names or secrets, even though some of the guilty are gone. I seeing my clients early in the day before they have their faces on. They trust me. You feel a bit like a psychiatrist or doctor.” Off the record, of course, one trouble-maker was Faye Dunaway when she starred in the 1997 national tour of Master Class, though when he worked with her on a film in 1983 they got on quite well.

Most are patience and real troupers, he pointed out. “They know really good work takes times.”

He’s done up to 20 shows in a year. “I’m disciplined to do that. I never think of doing anything else. This is what’s meant to be. This is who I am.” For years he worked closely with “my indispensable stylist” Eddie Windsor

Each wig creation took at least three to five days to create and costs were upwards of two thousand dollars. After the design is approved, the wig is actually baked to seal the set. For principals, Huntley used human hair imported from the U.K.; but he stated that that synthetics work best for performers, such as dancers. Then comes the daily maintenance.

Huntley spoke about the changes he’d seen. “When I came to Broadway, with the exception of Bob Kelly, who’d been working since the 60s, there weren’t a lot of hair designers. They were doing movies. The custom was for leading ladies to go to their hair dresser before performances. There were no mikes, so when they went into use, it was a new ballgame. Sound design changed everything. Wigs had to be worn by everyone, and they had to be bigger. I’d weave the mike through and most often secure the battery pack inside. I found ways so they wouldn’t look bulky and out of proportion.”

In one season, he might have up to six shows. “It’s a big and very creative job,” he informed, “especially since it’s your job to work with the designers and directors. You work with the costumer to make sure the hair texture doesn’t clash; and with lighting to find out if it’s going to be somber or very dramatic. You want to be correct as to period.

“A big change is the number of producers it takes to put on even a small Broadway show,” he added. “And every one of them has an opinion. I hear what they have to say, but don’t always listen!”

In addition to working with up-and-coming designers, Huntley was most proud of his work with Memorial Sloan-Kettering Cancer Center, where he provided free wigs for cancer patients.

“I feel I’m helping with the cure,” he explained. “If they go to wig boutiques, it’s not the same. When a professional does the wig, they can look in the mirror and see themselves. Everyone has the right to look gorgeous. It lifts their spirits.”