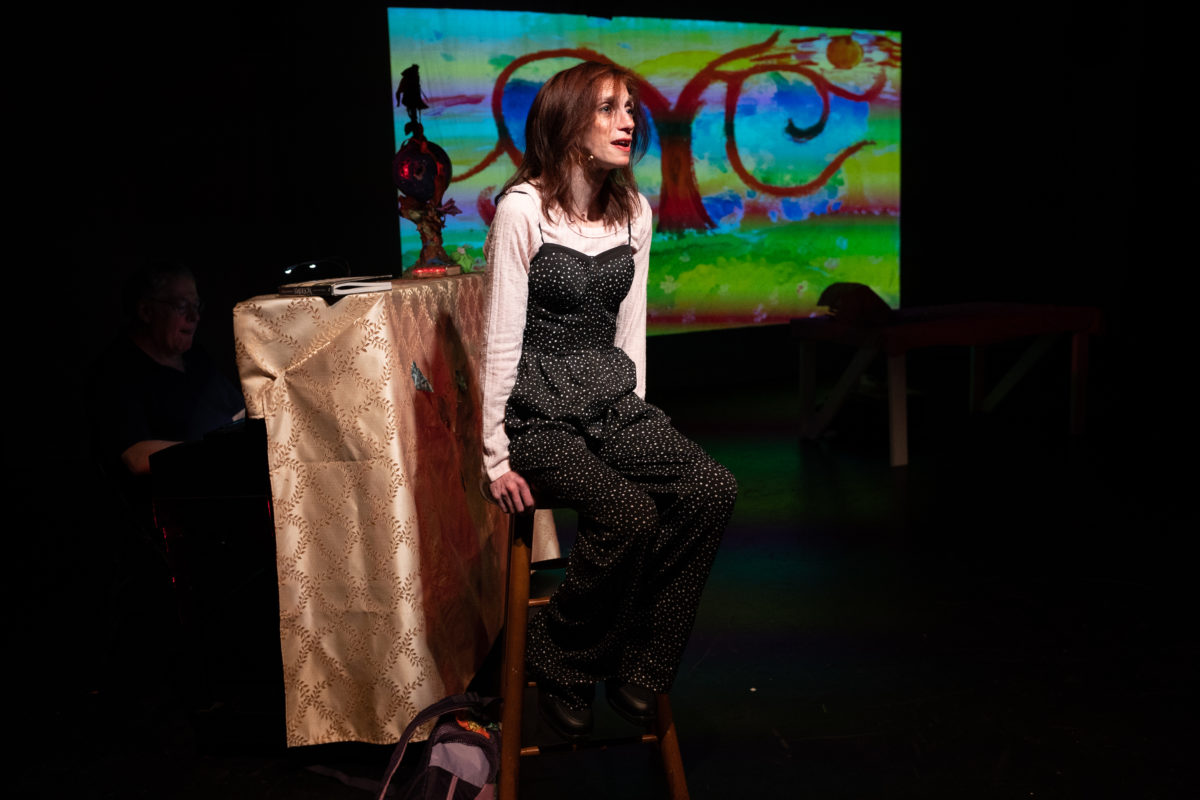 Sexually abused by her mentor, her voice teacher at a young age, she fiercely protected the person who abused her. Shortly after revealing the relationship to her mother, however, Oestreicher’s stomach exploded. Doctors told her that she had no digestive system. After surgery she was told she would never eat or drink.

It’s such a shocking story as to seem implausible. Like many accounts told by rape victims, Oestreicher’s experience is so horrific, we want to think it’s not true. Watching and listening to her, we know it is. Twenty seven surgeries later, she remains tiny, and fragile, scarcely a wisp of a woman.

As a performer, Oestreicher is a lion-hearted songstress. Often she sounds like an adult channeling her inner child. At other times she sounds cracked, like her spirit when she’s recovering from surgery. It’s not that her voice is melliflous or necessarily pretty. But it is rich in expressing a sense of humanity that is uniquely her own.

Abstract, and highly descriptive lyrics are her primary narrative tool. And the music, which she also composed, is lovely.  Bob Goldstone’s musical arrangements are expert, and he performs them at the piano beautifully. The two have a genuine mystical connection.

Often Oestreicher describes the bounty of nature. That is where her imagination is rooted. From her childhood friend, Mepes – the Maple tree who she continues to visit in adulthood, nature feels secure to her. That it will be there when the surgeries are over gives her confidence. In nature, she finds her roots, and her identity.

In “Keep Moving so Your Heart Stands Still, an extraordinary song with echoes of Sondheim’s “Into The Woods,” she sings, “Maple trees in June are melting in the heat. Notice what you notice/slivers in the street. Empty routes to wander/hollow steps to fill.”

Similarly, her paintings, projected against the back wall, burst with color, anthropomorphic scenes from nature, humorous sketches, and bold abstract images. The sheer volume of them moving quickly from one to the next is staggering. As Oestreicher explains, she discovered painting by accident when she was in the hospital. One of her first paintings was a happy tree that is crying.

Sensitively directed by Shellen Lubin, “Passageways” is an immersive theater piece that speaks to the power of hope, gratitude, and creativity. Ms. Oestreicher is a discovery audiences will be thrilled to make.