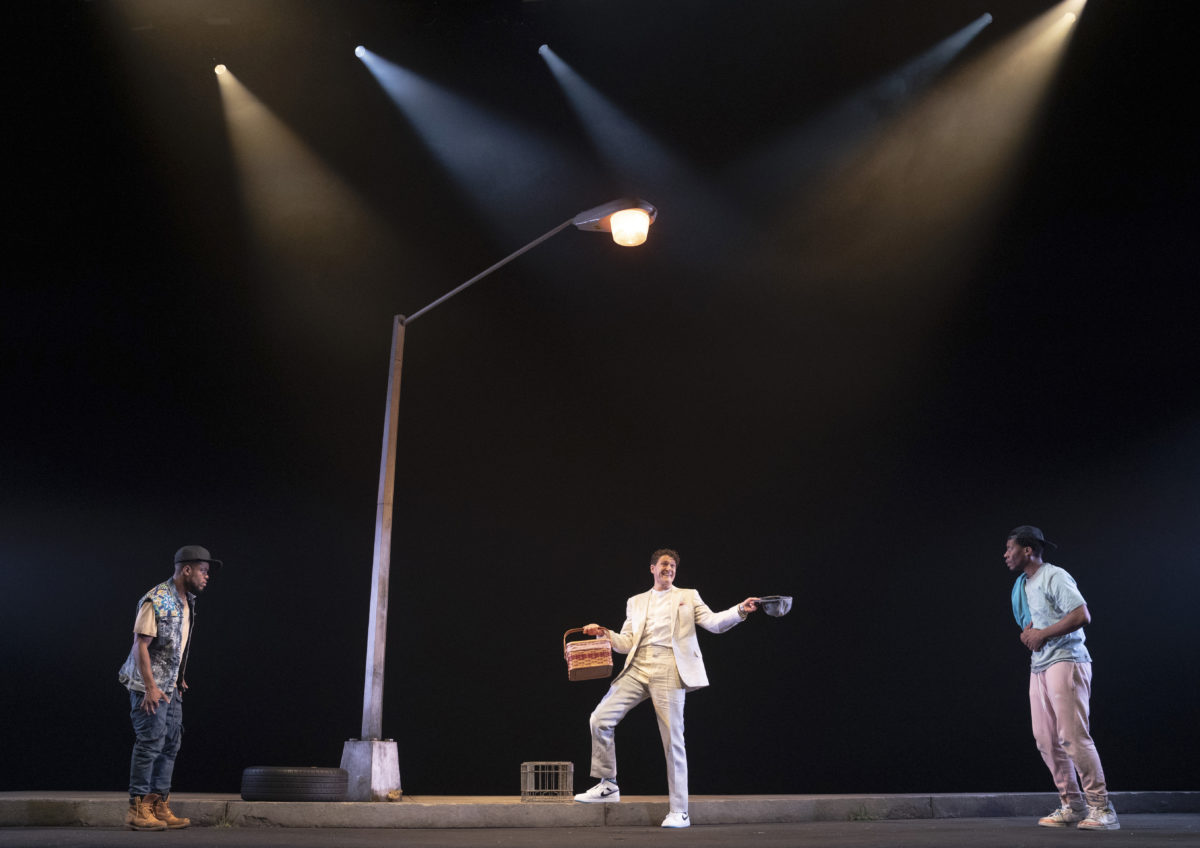 Their names, Moses (Jon Michael Hill) and Kitch (Namir Smallwood) tell us that they are demigods as well as contemporary social misfits.  Their repetitive banter, expressing their dream of social progress, is like a disturbing sequel to Lorraine Hansberry’s “A Raisin in the Sun,” which debuted on Broadway in 1959. In Hansberry’s drama a black family tries to move into a white neighborhood only to be met with hostility. The themes here are much the same, but the living conditions have gotten a whole lot worse. Their discourse and fighting projects a terrifying volatility.

However, the play is at its best when the comedy team of Moses and Kitch (Think: Vladimir and Estragon in “Waiting for Godot”) riff on themselves as when they sing the theme song from “The Jeffersons”. Their camaraderie, rife with rivalry and anger, also reveals their deep affection for one another.  Hill and Smallwood have an amazing on stage chemistry.

As a story of slavery, the religious connotations are obvious. Still, the outcome defies our expectations. Getting off this plantation is a lot less righteous than The Exodus. For Moses and Kitch the land of milk and honey feels like an apparition.

As they reflect on their condition – hungry, hapless and fearful, a tall white man named Mister, played by Gabriel Ebert, arrives. When asked his name, he cheerfully answers, “Master” and when he sees the reaction from the two street guys, he acts surprised. “It’s just a name a family name.”  Meanwhile, he’s quizzical about why they “really like that word” they use to describe themselves – “the n-word.”

While Mister seems harmless, lurking beneath that surface is a life threatening Ossifer – a cop. Ebert plays both roles. Still, each of these characters is “one of god’s chosen”.  Also, like many of us today, they’re stricken by the plague.

Nwandu’s stripped down dialogue sounds like every day black guys talking on the street. It’s raw and realistic as well as offensive, hard-hitting and sarcastic in a way that attacks the listener. However, in its reveal of black men seeking a better world, Nwandu’s language, like Mametspeak, creates a poetic impression of streetwise jargon.

As directed by Danya Taymor, the pace is uncomfortable for the audience. There’s no forward action that doesn’t set up an equal and opposite backward action. If language is reality, hearing the same negative mantra constantly is enough to wear anyone down. We feel their self-hate.

Because Nwandu’s play is performed without an intermission no one in the audience can go anywhere. Just like the actors in the play can’t. Ebert makes multiple entrances and exits, retracing and repeating his own clichés. In that role, Tony Award-winning Gabriel Ebert makes a physically lively and seductive return to the Broadway stage.

In the role of Moses, Jon Michael Hill is an experience in humility, even achieving heroic stature. His persistent encouragement to Kitch, telling him “we posedta rise above dat shit” expresses a sense of leadership.

Sadly however, Kitch gets trapped in the systematic racism. Like the black men Kanye West sings about in “New Slave”, Kitch is insultingly stereotyped. Falling prey to the promise of wealth, he winds up incapable of going anywhere. Even worse, he becomes a ‘slave’ to materialism just like the white man.

Set “in the (future) present” – in 2021 CE, 1855 and also 1440 BCE, this is an endless trope. Ironically or not, Wilson Chin’s minimalist set turns into a splendid vision of a Promised Land, eerily illuminated by Designer Marcu Doshi.

It is a rude awakening to see such a highly charged drama mark the opening of Broadway. Daring it is!