May 12, 2022: Finally, after yet another cancellation setback caused by a backstage Covid outbreak, I was able to see Paradise Square, the final iteration (one assumes) of what began as an intimate musical called Hard Times, which I saw—and admired—in its 2014 revival at Nancy Manocherian’s tiny theatre, the cell, on W. 23rd Street. (It first played there in 2012.) That excellent, unpretentious little production, with only half a dozen actors, has been radically transmogrified into a Broadway behemoth that premiered in 2019 at the Berkeley Repertory Theatre, and is presently at the Ethel Barrymore Theatre, with a cast of nearly three dozen, and a shelf of ten Tony nominations, including Best Musical. It also marks the Broadway return of Canadian producer, Garth Drabinsky, whose felonious activities have gained him notoriety. 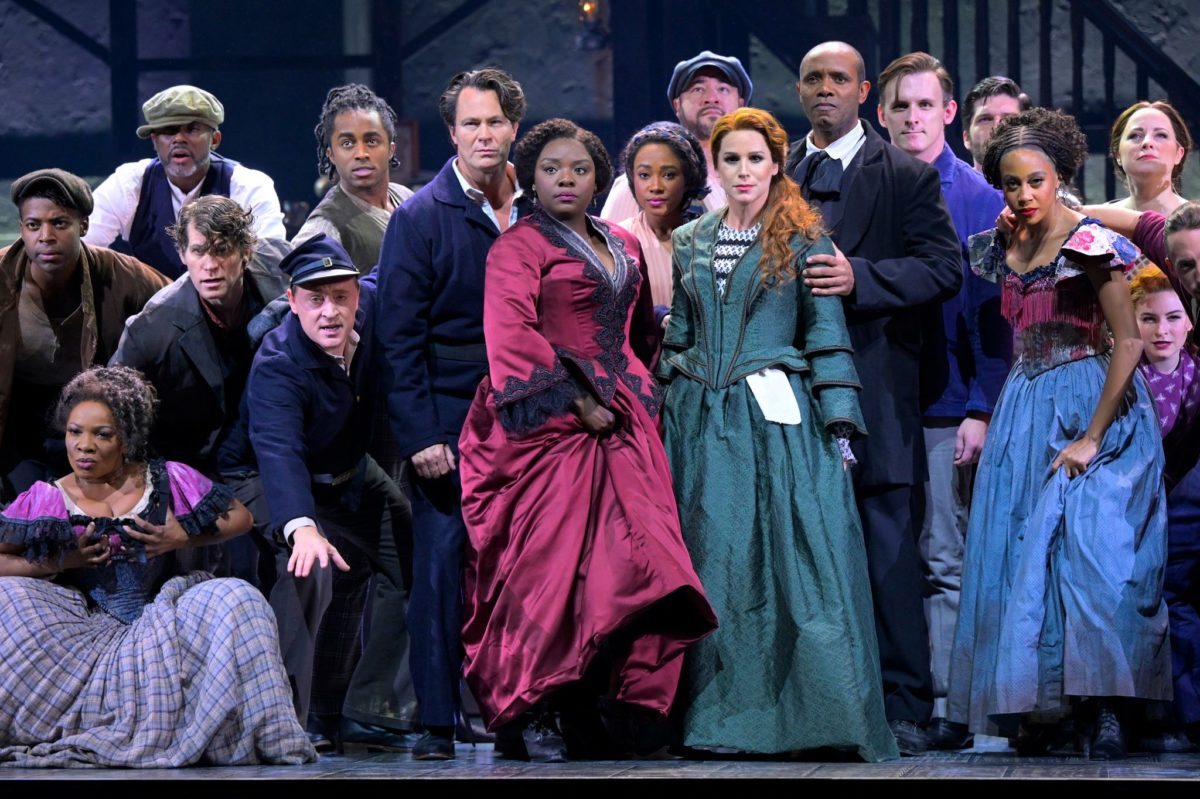 May 12, 2022: Finally, after yet another cancellation setback caused by a backstage Covid outbreak, I was able to see Paradise Square, the final iteration (one assumes) of what began as an intimate musical called Hard Times, which I saw—and admired—in its 2014 revival at Nancy Manocherian’s tiny theatre, the cell, on W. 23rd Street. (It first played there in 2012.) That excellent, unpretentious little production, with only half a dozen actors, has been radically transmogrified into a Broadway behemoth that premiered in 2019 at the Berkeley Repertory Theatre, and is presently at the Ethel Barrymore Theatre, with a cast of nearly three dozen, and a shelf of ten Tony nominations, including Best Musical. It also marks the Broadway return of Canadian producer, Garth Drabinsky, whose felonious activities have gained him notoriety.

Mr. Kirwan is now credited with conceiving the show, supplementing Jason Howland’s new score with “additional music” (“inspired in part by the songs of Stephen Foster”), and collaborating on the book with Christina Anderson and Craig Lucas, who share the Tony nomination for Best Score with lyricists Nathan Tysen and Masi Asare.

As in Mr. Kirwan’s original, the show depicts the background behind the notorious New York City race riots of July 1863. These were sparked by the government’s announcement of a draft that would send young men to fight for the Union Army in the Civil War. However, not only were “colored” men excluded, but anyone could buy his way out for $300, creating an egregiously unfair distinction between the poor and the rich. The ensuing riots took a horrendous toll in life (around 120 dead) and property. Paradise Square may take place a century and a half ago, but its revelation of American racial and class resentments is as fresh as today’s newsprint.

The action transpires mostly in the Five Points district of lower Manhattan, a working-class area where Blacks and whites—mainly Irish immigrants—lived together peaceably, even marrying one another without notably upsetting the social apple cart. (This is the neighborhood so vividly captured in Martin Scorsese’s movie Gangs of New York.) Within what the show depicts as an almost Utopian environment of racial harmony is Nelly O’Brien (Tony-nominated Joaquina Kalukango, Slave Play, startlingly impressive), the fiery Black proprietress of the Paradise Square saloon. Her dashing police officer husband, Irishman Willie O’Brien (Matt Bogart), soon goes off to fight for the Union cause.

Filling the stage to the rafters is a substantial assemblage of supporting characters. Reverend Samuel Jacob Lewis (Nathaniel Stampley) is a heroic man of the cloth who also heads the local Underground Railroad. He’s married to Willie’s feisty sister Annie Lewis (Chilia Kennedy), not too pregnant to prevent her from tucking a pistol into her waistband. The brash Irishman “Lucky” Mike Quinlan (Kevin Dennis) loses an arm in the war and, when he can’t find work, turns against his old friends. Young Owen Duignan (Tony-nominated A.J. Shively), fresh off the boat from the Emerald Isle, is soon swept up in the tide of history while also engaged in rivalry over who’s the better dancer, he or the runaway slave, Washington Henry (Tony-nominated Sidney DuPont).

Washington, sought by the law, longs for his beloved, Angelina Baker (Gabrielle McClinton), gone missing during their escape from the South. Frederick Tiggens (John Dossett), our villain, is an anti-Lincoln political boss convinced that emancipated slaves will take away white men’s jobs; he’s intent on stirring up trouble. And then there’s the alcoholic songwriter-piano player Milton Moore (Jacob Fishel), actually Stephen Foster, whose songs would later be considered racist, and who inadvertently reveals important information that gives the authorities a reason to shut down Paradise Square.

Paradise Square aspires to be a big musical intended to illuminate a catastrophic moment in American race relations—albeit with an ultimately healing (if unconvincingly optimistic)—message. Under the go-for-broke pace set by director Moisés Kaufman—whose lack of a Tony nomination some deem a “snub”—everything about it is big, beginning with its huge cast, filling every nook and cranny of Tony-nominated Allen Moyer’s three story-high, skeletal scenic structures, gliding gracefully around on a revolving stage under Donald Holder’s dramatic lighting. Bill T. Jones provides seismic choreography, inspired by step-dancing, break dancing, and other forms, performed with pile-driver blasts of leg-kicking energy.

There’s also a pile-on of ear-pounding music in a variety of styles, much of it having an Irish inflection. However, even the gentler ballads are unnecessarily supplemented by ensemble dance incursions, with numerous costume changes created by Tony-nominated Toni-Leslie James. Bigness also affects the actors’ larger-than-life melodramatic attitudes and line deliveries. Finally, there are the frequently overwhelming vocals, none more so than the Tony-nominated Ms. Kalukango when she launches into her prodigious eleven o’clock number, “Let It Burn,” displaying enough nuclear vocal power to explode the audience out of its seats into a standing ovation.

If only the music were not just plus-sized, offering large voices opportunities for roof-raising notes, but melodically memorable, Paradise Square might have a small claim to the kind of musical theatre stature of another history-based show, Les Misérables, whose grandiose pretension it brings to mind. But, for all the show’s performative excellence, the book crams too much into its two hours and 40 minutes, the characters can be formulaic bordering on cartoonish, and, apart from a scattered moment here and there, humor is an afterthought.

For those interested in the acorn from which this Broadway oak has grown, my review of Hard Times from eight years ago notes that its central character wasn’t Nelly O’Brien (then called Nelly Blythe), but songwriter Stephen Foster, who actually did sometimes live in Five Points when down and out. Its plot needed fleshing out—although not as much as what’s been done to it—but it allowed us to view Foster within the socio-political  “maelstrom” of that critical historical moment. The effect of the Draft Act on the Irish immigrant population, with its firing up a conflict between the Irish and the Blacks, was, as now, a fundamental element, with Nelly’s saloon serving as a place of refuge for those supporting the Union cause. However, the speculative notion that Foster was gay and had a love affair with Owen Duignan has been pulled; Owen was a blackface entertainer, by the way. Hard Times suggested that Foster turned to men because of his problematic marriage, scenes of which set in his hometown of Pittsburgh were included.

The character who evolved into runaway slave Washington Henry was originally a free black man named Thomas Jefferson, who did odd jobs at Nelly Blythe’s. There was also a local white authority figure named Michael Jenkins, in love with Nelly, but reluctant to marry her. He eventually demonstrated racial bias when fulminating about “more darkies” arriving.

The idea of a dance contest between a white and a Black man was also a part of Hard Times’splotting, albeit more specifically between Irish step-dancing and Black shuffle-dancing, not mentioned in Paradise Square. And, of course, the music was not new but 18 songs right out of Stephen Foster’s catalogue, with Mr. Kirwan providing some updated lyrics.

Hard Times definitely had its flaws, as my review noted, but it was delightfully appealing, nicely unified, and was much tightly rendered than its grown-up Broadway offspring. And, while Foster is currently subject to criticism—with caveats—for his sometimes racist lyrics, if I were wagering on whose tunes, his or those in Paradise Square, would be more likely to withstand the sands of time, I’d put my money on the guy who bet on a bob-tailed nag. Doo-dah.