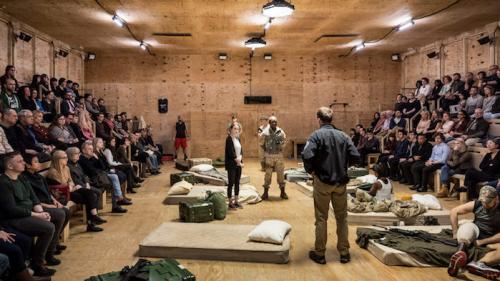 By: David Sheward
The moment you enter New York Theatre Workshop for Sam Gold’s searing production of Othello, you know it will be a startlingly different interpretation of Shakespeare’s tragedy of the noble Moor. Set designer Andrew Lieberman has reconfigured the normally spacious playing area into a tight, claustrophobic army barracks.

In Gold’s unsparing staging, Othello and his followers are modern American and English soldiers occupying a Middle Eastern territory. Parallels are drawn between the Bard’s themes of racism and misogyny and contemporary issues of the same conflicts along with imperialism and cultural oppression as the self-hating, Cockney, Caucasian Iago (a brilliantly devious Daniel Craig) is driven to distraction by the merits and advancement of the foreign, dark-skinned Othello (David Oyelowo in a powerhouse, career-defining performance). You could infer similarities to Trump and Obama, but that’s up to you.

Regardless of the political implications, the production has the impact of a gut punch. Iago and Othello are engaged in a wrestling match to the death which sometimes becomes literal (kudos to fight director Thomas Schall). Craig captures the broiling rage of lago and his insidious drive to spread lies and “fake news” about Desdemona’ fidelity. This is an Iago akin to Richard III in his quest to destroy anyone who has what he doesn’t. His envy of Othello’s happiness in marriage and career inspires him to infect the Moor with the same disease. Many only know Craig as James Bond, but his performance here—and in Broadway productions of A Steady Rain and Betrayal—display a subtle craft unseen in the 007 franchise.

Oyelowo matches Craig in intensity and masterfully calibrates Othello’s descent into uncontrolled madness. He begins as the assured general, confident in his military ability and his love for Desdemona (a charming and spirited Rachel Brosnahan) despite the heated disapproval of her bigoted father Brabantio (an appropriately indignant Glenn Fitzgerald). His doubts, fed by Iago’s lies, gradually take over Oyelowo’s noble visage, twisting it with fury and turning him into an inhuman monster. His humanity returns with devastating force at the final denouement when the truth of his wife’s faithfulness and his ensign’s deceit trigger a howl of despair which seems to come from the pit of hell.

Even the supporting roles are fully fleshed out. Marsha Stephanie Blake is a flinty Emilia,  Finn Wintrock is a valiant but flawed Cassio, and Nikki Massoud makes for a heartbreaking Bianca, a role usually thrown away. Special mention to Matthew Maher whose comic timing and honest limning give depth to the normally buffoonish Roderigo. At one point he crawls out of a foot-locker. I’m not sure how this was accomplished, but it was just one arresting moment in a landmark production. 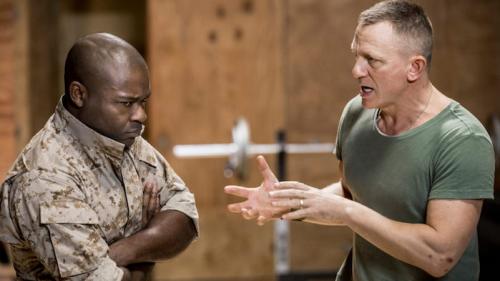