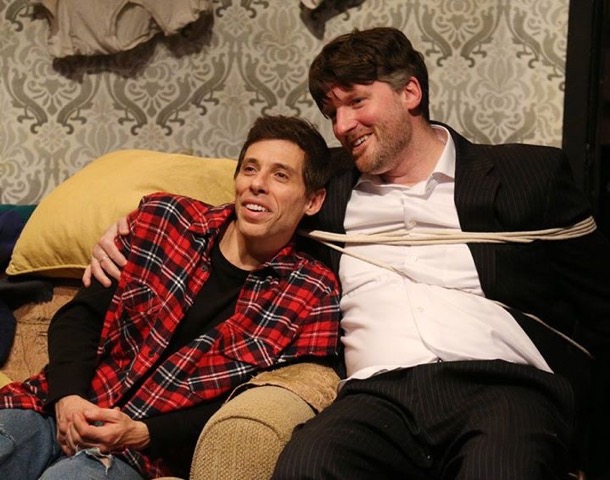 The play was the first Steppenwolf production to be performed on London’s West End at the  Apollo Theatre. On Broadway, it was directed by Daniel Sullivan and starred Ben Foster as Treat and Tom Sturridge as Phillip, the two orphans, and no less than Alec Baldwin as Harold, the Chicago gangster who takes the two young men under his wing.

This impressive history does not seem to have deterred director Aaron Latham and his cast from staging a small-scale but artistically noteworthy production at The Bridge Theater @ Shetler Studios.

The production features Fady Kerko as Treat, the extremely violent petty thief who protects and terrorizes his younger brother, Phillip (Alex Montaldo). Phillip hides in the closet when his brother is out, afraid to venture into the street because he once had an almost fatal allergic reaction.

Gregg Prosser is Harold, an older man whom Treat brings home one day and intends to hold for ransom, having decided Harold is wealthy and must have rich friends. The benevolent Harold was an orphan himself and knows exactly what these two young men need: love and self-confidence.

Harold buys Treat new clothes and makes Treat his assistant. He gives Phillip a map and tells him he needs to get out of the house. Treat chafes a bit under Harold’s fatherly advice, but Phillip basks in Harold’s affection.

There’s something more than a little ridiculous about this whole setup. If the ever-present brutality were not so overwhelming, we might be tempted to a laugh a bit more than we do at this black comedy. But often when we’re trying to figure out whether we’re going to chuckle or shudder, Lathm introduces singer/songwriter Alla Ray as a mysterious, otherworldly figure (probably the dead mother) who haunts the apartment.

Ray’s lyrical singing emphasizes the surreal quality of the play but contrasts uncomfortably with very realistic set and dialogue. This is a note that somehow doesn’t ring true.

More effectively, the stage has been turned into a shabby North Philadelphia apartment, with a worn couch and a clothesline strung across the back wall. And the cast works with impeccable synergy.

Montaldo leaps and cringes with great acrobatic grace, and Kerko is menacing but not entirely unsympathetic as his psychopathic brother. Prosser’s deadpan performance is the fulcrum that makes the relationships (and the play) work.

Orphans is a much needed reminder that good theater needs only an intriguing script, skilled direction and a talented cast.