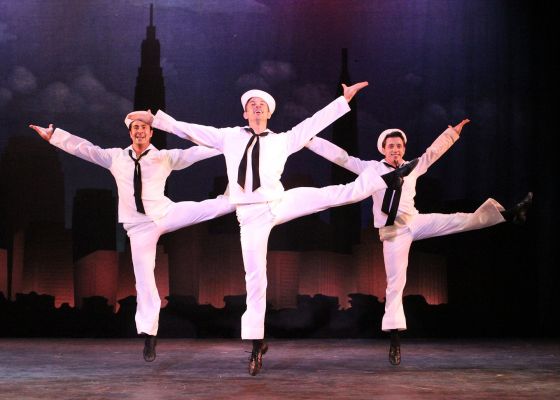 Sailors (Nick Adams, of Broadway’s Priscilla Queen of the Desert), Chip (Daniel Switzer) and Ozzie (Sean Ewing) have one day of shore leave in New York, and they want to paint the town red. The three wide-eyed, adventuresome young gents set off on adventures that find them love, excitement, and of course, music. With a score by Leonard Bernstein and book and lyrics by Betty Comden and Adolph Green, audiences visiting Long Island’s Bellport are treated to an entertaining adventure of their own.

Adams’ Gabey is passionate, seemingly flying through the air in numbers such as “Lonely Town,” in which his character’s longing and sadness are expressed through choreography that speaks volumes. Lexy Lyric’s Hildy is also a standout in this Town; with her knack for comedic timing and jazzy vocals, she is perfect in the role of the flirtatious cabbie with affectionate sights set on Chip. Audiences can look forward to the spunky number “Ya Got Me,” in which Lyric joins Switzer, Ewing and Amanda Higgins (snooty anthropologist Claire) for the humorous and lovable crowd-pleaser. Andy Redeker’s Judge Pitkin is phenomenal in all of his naïve yearning, eventually evoking the chant “I understand” (his sad mantra) from his audience before he even utters the words.

Those familiar with Broadway’s most recent production might remember Jackie Hoffman taking on multiple roles, imbibing the show with great guffaws and much of its heart. Thompson chose not to follow in these footsteps, and unfortunately only a few of his supporting roles were successful. Voice teacher Madame Dilly lands few laughs, as her drunken antics are too muted; the old lady who famously chases the sailors through New York on the back of a policeman is also forgettable, as her lines are muffled and her actions are small; Delores Delores and Diana Dream (both played by Katie Mitchell) are undeniably the stars of the comedic ensemble roles, as each of them croons “I Wish I Was Dead” boisterously and hilariously.

No sparkle is spared in this Town; Costume World Theatrical’s outfitting is eye-popping, especially against the backdrop of the bright lights of New York. Whether the Coney Island rollercoaster is moving through the sky, or the bright dazzles of midtown signage (such as Sardi’s and the Winter Garden), are a glowing rainbow upstage, scenic designer Michael Boyer and lighting designer Marcia Madeira’s concepts are impressive and exciting to witness. Thompson utilizes both of their talents to great success in “Coney Island Ballet” and “Carried Away” (don’t miss the circus, complete with balloons, popcorn and gypsies, parading through the house in the former, and the goofy moment at the end of the latter).

Gateway’s Town features the popular songs “New York, New York” “Some Other Time,” and “I Can Cook Too” as they’ve never been seen before. One can’t help but enjoy the hits from America’s great musical theatre canon, but they’ll appreciate the grandiosity of Manhattan and the distinctiveness of this production while being only steps away from Bellport’s beaches.

Iris Wiener is an entertainment journalist. Follow her on Twitter @Iris_Wiener or visit her at IrisWiener.com. Photo: Jeff Bellante