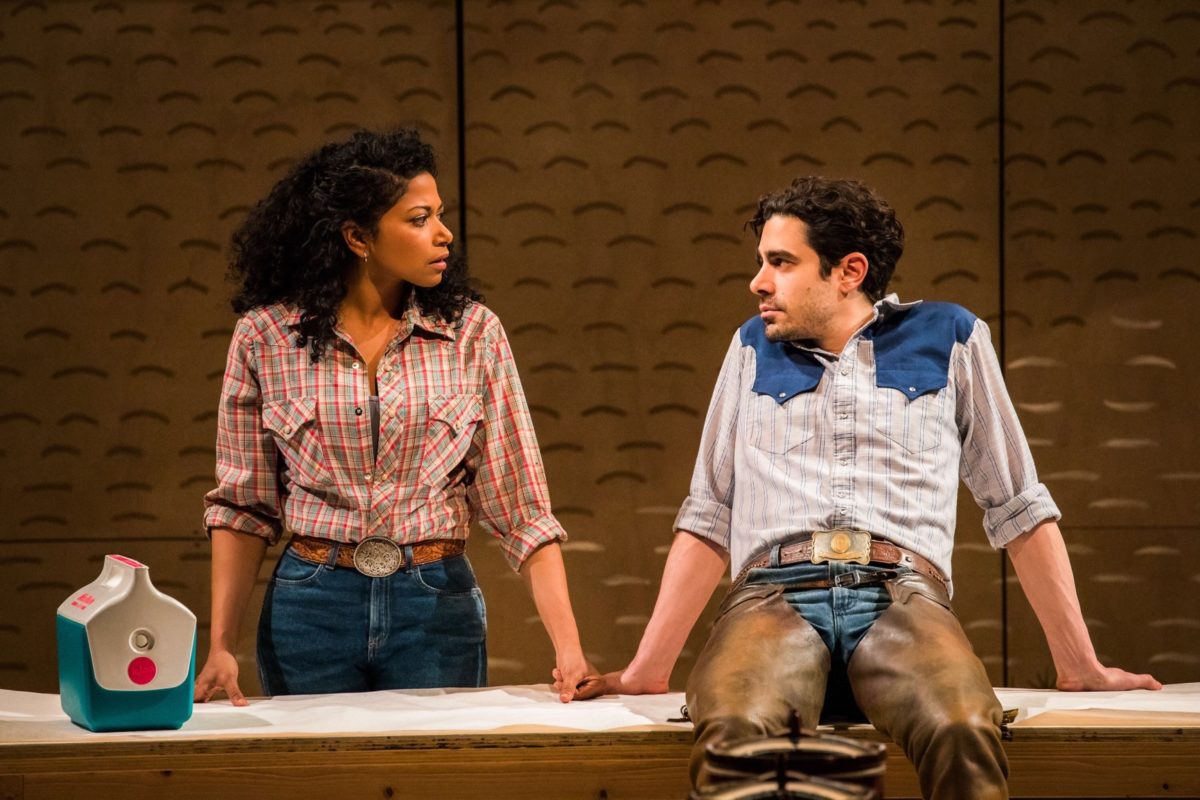 Oklahoma! is set in the state the musical is named after in 1906, the year before it entered the union. This is the time when the territory had begun to be settled by the white families that will till the soil, establish towns, and tame the outlaws and cowboys who previously roamed the land.

The story focuses on the romance of farm girl Laurey Williams and cowboy Curly McLain, complicated by the amorous ambitions of the sinister farmhand Jud Fry. Laurey’s crusty Aunt Eller, and the secondary romance between the not too bright cowboy Will Parker and the freewheeling and flirtatious Ado Annie provide considerable humor to an otherwise dark story

Just as the land must be settled, the couples must resolve to become responsible and mature citizens, faithful partners and loyal citizens. Thus the personal and the public stories are closely related.

All the above is ignored, either willfully or ignorantly, by Daniel Fish, who directs the Broadway musical (originally at St. Ann’s Warehouse) with an eye toward deconstruction. If this means stripping the show down to its essentials, it doesn’t seem Mr. Fish looked too closely at the original.

Fish’s Oklahoma! turns the theater into what seems to be a community barn. Shotguns line the walls of the house. The stage Is furnished with a few long tables on which corn is husked and pots are steaming. Although this gives us little idea of the vast countryside, it does establish an interesting intimacy.

The real problem arises in Fish’s interpretation of the characters.

Laurey (Rebecca Naomi Jones), in the original version, romantic, indecisive and immature, is now anxious, neurotic and nasty. Where the traditional Laurey just needs to grow up, this Laurey needs a good psychiatrist.

Curly (Damon Daunno), a cowboy Romeo confident in his charm, has now become a smooth operator who flaunts his virility. His intentions seem more related to lust than love. When he sings “People Will Say We’re in Love,” we have every right to ask why.

Aunt Eller (the usually wonderful Mary Testa) has all the charm of burnt toast. Her harshness only increases when she  sings.

As for Ado Annie, despite Ali Stroker’s considerable talents, accepting her as a young lady courted by half the male population of the territory (“I Cain’t Say No”) requires a suspension of disbelief no director has the right to ask of his  audience.

The rest of the actors struggle along more or less successfully. James Davis, who plays Will Parker, turns the dimwit into a bright spot. And Will Brill is often quite funny as the predatory peddler, Ali Hakim.

Rodgers’ glorious score is now given orchestrations that might be more appropriate for a hootenanny. The bluegrass interpretation is interesting for the first few songs, but after a while sounds weak, boring or inappropriate, sort of like listening to Bach played on a kazoo. As for John Heginbotham’s modernistic, gymnasitc interpretation of the dream dance, the less said the better.

Some people have hailed this production, with its emphasis on violence, sex and anger, as an Oklahoma! for modern times. The lilacs were not as green as we have been told they were, says Fish’s new interpretation. This is truly a bleak vision, one that may deserve its own musical. But it is not a good enough reason for destroying such an historically and artistically magnificent work.