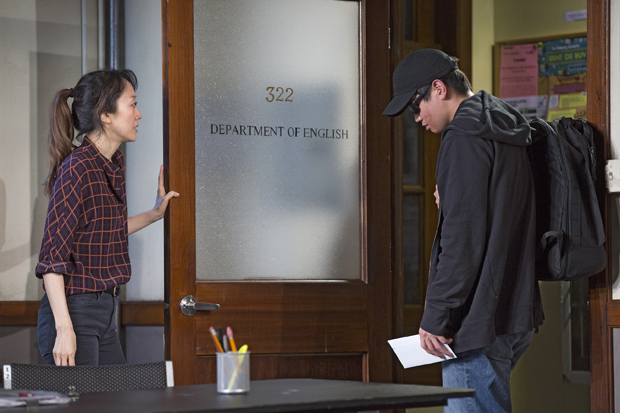 In fact, Dennis (Ki Hong Lee) is like a photographic negative of Steve Carell’s character in The Office. Only in this case, the paper factory – where the TV series was set, is now the college where Dennis is a creative writing major.  For him, all roads lead to hell. He writes screenplays, and even poems that explode with bizarre violence and deviant sex.

As the play opens, three of his teachers gather over drinks to figure out what to do with this kid who implies, through his narratives, that he is about to take a gun and shoot us all.

As the one man in the group, David (Greg Keller) feels particularly pissed off at his powerlessness in the face of this loose cannon. Genevieve (Adeola Role) is beyond words; and Gina (Sue Jean Kim), the next one to be tested, is trying to learn from their experience.

Portraying the antagonist of sorts, Sue Jean Kim delivers a strong portrayal – one that is focused, and truthful. Even her reactions are riveting. In fact, most of the play takes place in her office, where she has summoned Dennis to discuss his violent narratives, while he sits there, refusing to respond. That she keeps him in the room, along with the audience, is a mighty feat.

Eventually she gets him to reveal himself – his sense of inadequacy, self-loathing, and fatality. The character that emerges is a kind of cookie cutter mass murderer.

While the events in this drama are based on the 2007 Virginia Tech massacre, Cho’s cynicism appears to be aimed at the tyranny of political correctness.  When Gina touches the young man on the arm to show him compassion, we watch with a sense of foreboding. After all, she isn’t supposed to touch him, or communicate so intimately with him. It’s an invasion of his (private) physical and psychic space.

And he isn’t supposed to be carrying a gun. Although in reality, whether or not he is carrying a gun, or guns, remains a matter of interpretation.

As directed by Neel Keller, scenes of imagined killing and suicide, merge with the banality of everyday conversation. Tense scenes are repeated, so that we see the potential for different outcomes. The reality feels miserable enough, but the fantasies are lurid, and deathly!

Still, it’s all portrayed as ongoing life. It’s a story we hear so frequently these days that it almost tells itself.

Set inside the ivory tower, (Takeshi Kata, sets, and Christopher Akerlind, lighting) the atmosphere expresses warmth and intellectual desire, all of which recede behind the silence of alienation and the shattering sound of gunshots.