April 4, 2020: The COVID-19 pandemic continues to ravage the New York theater world as well as all aspects of American and world society. On March 12, all Broadway theaters were ordered closed by New York Governor Andrew Cuomo to prevent the spread of the coronavirus. 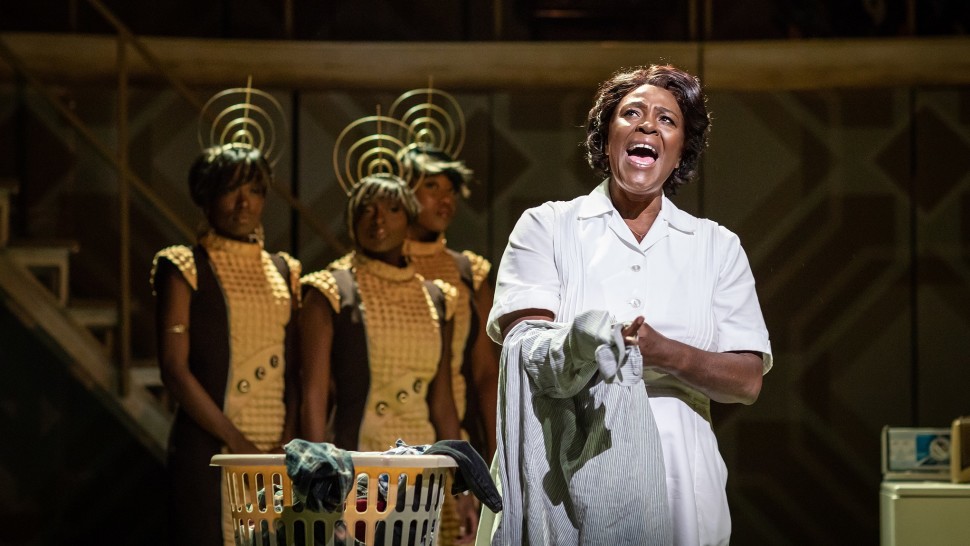 Sharon D. Clarke and cast in “Caroline or Change” which has been postponed to the fall Credit: Helen Maybanks

April 4, 2020: The COVID-19 pandemic continues to ravage the New York theater world as well as all aspects of American and world society. On March 12, all Broadway theaters were ordered closed by New York Governor Andrew Cuomo to prevent the spread of the coronavirus. Smaller Off-Broadway theaters soon followed as well as cabarets, nightclubs, cinemas, and all other performance venues. The original re-opening date announced by the Broadway League was April 13, but that appears to be obsolete. While the League has made no official announcement about a new date, larger forces keep pushing it unofficially later. First the Center for Disease Control recommended no large gatherings of any kind for eight weeks. At first President Trump wished aloud that the country would re-open by Easter Sunday, painting a rosy, if implausible picture of packed, disease-free churches. Only a few days later, he backtracked and extended national guidelines for Americans to stay at home until April 30. The stage blackout could continue well beyond that. New York state has become the epicenter of the outbreak in the United States with over 102,000 confirmed cases and over 2,900 deaths as of Fri., April 3. New York City alone has reported over 57,000 cases, and the numbers are growing rapidly. Governor Cuomo has stated the apex of the curve of cases will likely arrive in about two weeks (the middle of April).

Even after the rate of infection has decreased and the Empire State starts to return to a semblance of normalcy, large public gatherings such as Broadway shows and other live entertainments will probably be the last element of our lives to come back. Without large-scale testing, asymptomatic carriers could unknowingly spread the virus, so the current state of mitigation and social distancing is likely to continue for some time beyond the end of April. Once the infection and death numbers begin to fall and citizens are permitted to return to their jobs, it’s still no guarantee theaters will be open or that people will want to congregate in large numbers. After weeks of maintaining a six-foot space between each other, will New Yorkers and out-of-towners want to share armrests with strangers in a crowded space for two and a half hours? In the absence of a vaccine, which Dr. Anthony Fauci has stated is at least a year away, there is still risk the virus could crop up again.

The Broadway theater is also dependent on tourists, both foreign and domestic. Travel restrictions from other states and countries will definitely make a negative impact on the box office. In addition, millions of people have lost their jobs or been furloughed due to the outbreak and luxury items like theater will probably not be in many of their future budgets.

Many productions have been cancelled or postponed. Hangmen and Who’s Afraid of Virginia Woolf?, both in previews before the shutdown, were the first two Broadway shows to announce they would not be opening at all. Roundabout Theater Company’s Birthday Candles and Caroline or Change and Lincoln Center Theater’s Flying Over Sunset and Intimate Apparel (Off-Broadway) will be opening in the fall. Of the Broadway productions which had yet to open that leaves the new musicals Six, Diana, Mrs. Doubtfire, and Sing Street (transferred from New York Theater Workshop Off-Broadway); the plays The Minutes and The Lehman Trilogy (transferred from a production at the Park Avenue Armory last season) and revivals of Company, Plaza Suite, American Buffalo, How I Learned to Drive, and Take Me Out.

Broadway shows which had opened earlier in the season and were still running at the time of the blackout included Girl from the North Country, Jagged Little Pill, Moulin Rouge, Tina—The Tina Turner Musical and West Side Story. Holdovers from previous seasons included Ain’t Too Proud, Aladdin, Beetlejuice, The Book of Mormon, Chicago, Come from Away, Dear Evan Hansen, Frozen, Hadestown, Hamilton, Harry Potter and the Cursed Child, The Lion King, Mean Girls, The Phantom of the Opera, and To Kill a Mockingbird. Opening dates for 2029-21 productions—including MJ, the Michael Jackson musical (set to open Aug. 13 at the Neil Simon) and The Music Man (Oct. 15 at the Winter Garden)—remain unchanged. But who knows how long the theaters will remain dark?

The shutdown occurred just before the annual plethora of theater awards are dispensed in late April and early May. All of the ceremonies have been affected. The Theater World Awards have been pushed back to the fall. The Tony and Outer Critics Circle Awards have been postponed to an unspecified future date. There has been much speculation as to what format the delayed awards will take and if eligibility will include the truncated 2019-20 season or if they will combine with the 2020-21 season.

The Drama Desk, Obie, Chita Rivera and New York Drama Critics Circle Awards have not yet made statements about their plans. The Lortel Awards, exclusively for Off-Broadway, is the only presentation so far to officially proceed. However, there have been some alterations. Nominations will be announced on April 14 and the winners will presented on May 3 in a digital format. Productions opening after Feb. 16 were given the option of being considered for this year’s awards or the next. The Drama League will replace its annual award luncheon on May 15 with a digital fundraiser.

The virus has also claimed many lives in the theater world including four-time Tony-winning playwright Terrence McNally, critic and former president of the Drama Desk William Wolf, actors Mark Blum (numerous Broadway and Off-Broadway credits, Obie winner for Gus and Al) and David Schramm (Finian’s Rainbow, Wings), composer Adam Schlesinger (Cry-Baby, Crazy Ex-Girlfriend), musician Bucky Pizzarelli, and Hilary Teachout, wife of Terry Teachout, the theater critic for the Wall Street Journal. Among those who have tested positive for the virus and appear to be doing well are Moulin Rouge co-stars Danny Burstein and Aaron Tveit, Tony winner Brian Stokes Mitchell, Laura Bell Bundy (Legally Blonde, Hairspray), Chad Kimball (Come from Away), singer-songwriter Sara Bareilles (Waitress), composer David Bryan (Diana the Musical), TV personality Andy Cohen, opera legend Placido Domingo, and CNN anchor Chris Cuomo. According to People magazine and Deadline, Nick Cordero (Bullets Over Broadway, A Bronx Tale) has been hospitalized with pneumonia and it has not been revealed if he has tested positive for COVID-19.

Meanwhile, to replace the missing live performances, theater artists and companies have been presenting concerts, readings, and entertainment via various social media platforms. The National Theater will present broadcast versions of its productions on its YouTube channel including Jane Eyre (April 9), Treasure Island (April 16) and Twelfth Night (April 23). The Metropolitan Opera has been offering a different opera from its archives every night on its website. Andrew Lloyd Webber will be releasing video versions of his musicals on line for free, Seth Rudetsky lives streams his Stars in the House series of concerts and discussions with Broadway stars, and Patti LuPone has been giving tours of her basement on Twitter.