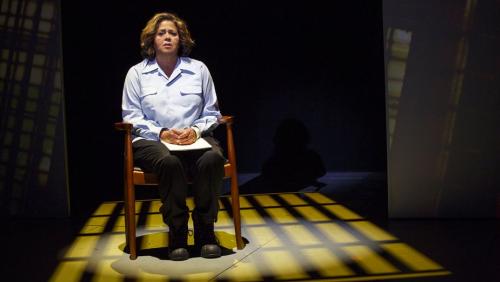 Here, at Second Stage Theatre off Broadway, the audience arrives to a scroll of data
projected on (a kind of) video wall. One of them states that in 2016, one of
every thirteen African American citizens was not able to vote because of felony
convictions – four times that of any other group.  Smith tackles her
subject with hard facts, extensive research, and in-depth interviews.

To illustrate her point about “prison as a right of passage” for Black Americans,
she presents seven diverse case studies. Among them, Freddie Gray in Baltimore,
who at the age of 25 was murdered for the unforgivable act of looking a
policeman in the eye. And Niya Kenny in South Carolina, who at eighteen was
sent to an adult penitentiary for defending another girl from the demands of a
white male teacher.

Throughout these grueling tales of racial injustice, Smith ever the performance artist,
portrays all of the characters, one more poignant than the next. Through the
powerful words of her subjects, the playwright describes the process by which
African Americans are incarcerated, and the system of enforced slavery, through
poverty, which prevails and pervades.

From her early works, Fires in the Mirror and Twilight Los Angeles about
the riots in Crown Heights and LA respectively, Anna Deavere Smith has been a
chronicler of injustice. And she’s so entertaining, the didacticism simply
becomes a form of consciousness raising.” If everyone could just help one kid,
it would be a better world,” she tells us, and asks us to repeat it.

Today, at time that is so heavy with political strife, Smith is as rousing as she has
ever been. Brilliant, focused, and deeply heartfelt.