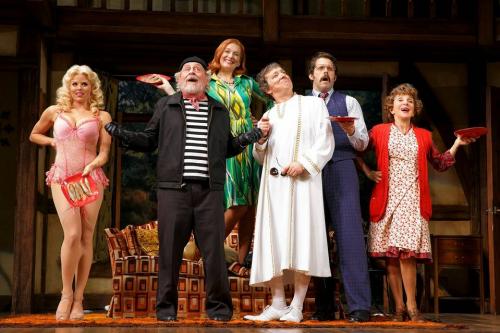 Michael Frayn’s Noises Off has turned into a reliablelaugh machine. The British backstage farce premiered in London in 1982 and then transferred to a long run on Broadway the following year. A 2001 revival starring Patti LuPone also had a respectable stand. Now Noises is back for yet another New York engagement, this time from Roundabout Theater Company with an ensemble of stage vets emphasizing the human dimension of this knockabout yuckfest. Director Jeremy Herrin, whose last New York credit was the massive, two-evening Tudor-era historical pageant Wolf Hall, gets most of the necessary split-second timing right but also slides in a bit of character development.

The ingenious premise consists of running the same first act of a brainless, door-slamming sex comedy called Nothing On three times. First at a disastrous dress rehearsal for the show’s regional tour, financed by fading sitcom star Dotty Otley who is playing an eccentric housekeeper. This sets up the intricate action of pratfalls, misplaced props and mistaken identities so it takes some time for the action to get going. In the second act, we switch to backstage during a performance when multiple offstage dalliances have ignited jealousies and frazzled nerves. Everything than can go wrong does and the hilarity increases as the mistakes pile up. But we needed the set-up of the first act so as to understand what’s going on—or off—in the second. The third act wraps it all up with a totally horrendous rendering of the show towards the end of the tour when all semblance of order has broken down. The joke is that farce requires exquisite blocking and watching it fall apart can be even funnier (Frayn got the idea for the play while watching one of his shows from the wings.)

The missed cues and accidents are all in place but the current director and company have added dimension to the stock characters. In the previous Broadway productions, their heinous behavior came across as mere triggers for mayhem. The director Lloyd Dallas has simultaneous affairs with the mousy stage manager Poppy and the buxom ingenue Brooke while Dotty carries on with leading man Garry and then sets her cap for the witless supporting actor Frederick. Here the farceurs’ foibles are more honestly arrived at rather than inserted to get laughs.

Andrea Martin’s Dotty is a self-dramatizing drama queen grabbing the attention of younger men as she clings to illusions of a grand career. Megan Hilty makes a complete fascinating character of dumb-blonde cliches as the gorgeous but empty-headed Brooke, stuck in her memorized part no matter what mishaps are happening around her. Campbell Scott delivers a narcissistic and aggravated Lloyd, desperate to escape lowbrow hijinks and sink his teeth into Shakespeare. David Furr hilariously accentuates Garry’s mental tick of not being able to complete a sentence and Jeremy Shamos skillfully expresses Frederick’s neuroses and need for acting motivation (watch as he fondles a box of props as if it would save him for the chaos surrounding him.) Tracee Chimo makes the weepy Poppy into a lonely little girl while Rob McClure gives backstage handyman Tim a magnificently overblown case of the jitters when he is forced to go onstage. Kate Jennings Grant captures the oversolicitousness of company gossip Belinda whose attempts to correct the madness just makes things worse. Daniel Davis is riotously forgetful as the alcoholic Selsdon, missing lines and secreting whiskey around Derek McLane’s complex set.

Noises Off doesn’t have much on its mind other than making audiences laugh, this production does that in spades, but also gives us a group of real people falling down the stairs, slamming doors, and slipping on dropped sardines, which makes the antics all the funnier.