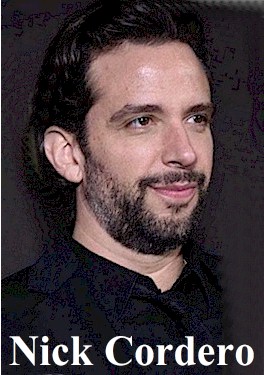 Actor Nick Cordero, Due to Complications from COVID 19, Has Leg Amputated

Monday, April 20: The wife of Tony Award and two-time Drama Desk nominee Nick Cordero, Amanda Kloots, announced via Instagram  that Cordero’s right leg was amputated on Sunday following complications from the COVID 19/corona virus. “Nick is out of surgery and in IC resting,” she posted.  Cordero, who was playing Dennis in the Los Angeles run of Tony-nominated musical Rock of Ages, were admitted two-and-a-half weeks ago to the Cedars-Sinai Medical Center IC unit when he was having difficulty breathing.

Kloots posted that he original diagnose was thought to be pneumonia. “Nick’s very weak and having a hard time breathing.” she posted. “We are trying to stay positive and strong. He’s fighting like a champ.” Klotts ended her post with a heartfelt thanks to the doctors and nurses, “all angels who have been helping so far.”

However, Cordero’s health quickly deteriorated. When it was found that he had COVID-19, he was rushed to the ICU unconscious and placed on a ventilator to facilitate his breathing.  He was   treated with blood thinners to stop clotting in his leg, but doctors stopped the treatment when he began bleeding internally.

Unable to visit her husband, Kloots has been sending him videos of her and their 10-month-old son, Elvis. She’s urged prayers and that friends and fans join in a daily sing-a-long.  The tall, lanky Cordero has long been considered an all-around great guy. Friends set up a Go-Fund-Me account that, to date, has raised in excess of $200,000.

Cordero made his Off Broadway debut in 2009. He made his Broadway debut joining the company of 2009’s Rock of Ages in 2012. He  made quite an impression on audiences and critics in 2014 as Cheech, the strong-armed gangster bodyguard who becomes a playwright in Woody Allen and Douglas McGrath’s’s stage adaption of his 1994 Flapper Era film comedy  Bullets Over Broadway, which netted him Tony and Drama Desk nods as Best Featured Actor, Musical. He originated the role of estranged husband Earl in April, 2016’s Waitress, and that December as Sonny inChazz Palminteri’s stage adaptation of his A Bronx Tale, which netted him a DD Best Actor, Play, nomination.

His TV and film work include recurring roles in Blue Bloods and Law & Order: Special Victims Unit; and in Don Juan (2011), Going in Style (2017), and last year’s Inside Game.

Cordero joins the list of Broadway stars who have contracted the virus and are recovered or in recovery. These include Laura Bell Bundy, Danny Burstein, Gavin Creel, Brian Stokes Mitchell, and Aaron Tveit. Four-time Tony-winning playwright Terrence McNally, recipient of a 2019 Tony for Lifetime Achievement and a 1994 Pulitzer Prize nomination, passed in March due to complications from the virus.