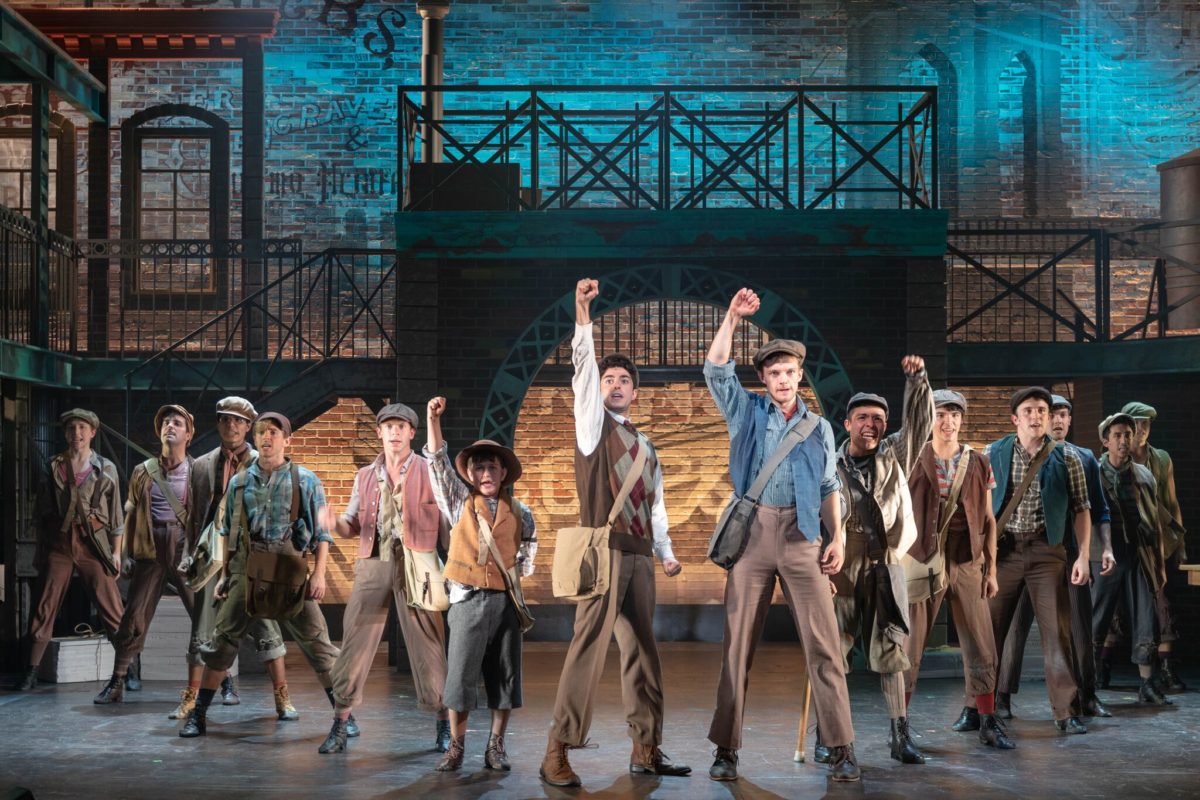 1. Sandalio Alvarez has concocted an invigorating, complex string of choreographed numbers in Newsies, now playing on the mainstage through September 2nd. The power and energy in “Carrying the Banner” is enthralling, as is the newsies’ ability to harmonize while taking the New York streets by storm. Igor Goldin’s direction is distinct; he has his large cast of actors create the bustle of the city with little use of props and set changes.

2. Dan Tracy’s performance in the newsboy cap of Jack Kelly is transformative. Though many Broadway vets have graced the stage of the Engeman (Dames at Sea’s Danny Gardner and Something Rotten’s Brian Shepard most recently took on Singin’ in the Rain’s Don Lockwood and Cosmo Brown, respectively), Tracy is a fresh talent, one that would be a shame to miss before he inevitably makes it to Broadway.

3. The children’s theatre is as charming as the mainstage show. Shrek the Musical, also running through September 2nd, craftily makes use of the stage set for Newsies, flawlessly transforming the gritty streets of 1899 New York to the swamps and palace of Duloc. The uniquely talented cast, led by the stellar Evan Schultz as Shrek and the cleverly hysterical Marlin D. Slack as Donkey, is an uproarious gift to the stage. Children and adults alike will be snorting through laughter at Pinnochio’s (Jojo Minasi) “glandular condition” and Gingy’s (Amanda Geraci) strong-willed confection. The creativity behind Kevin F. Story’s production is palpable, as is Danielle Aliotta’s joyous choreography in numbers such as “Story of My Life” and “Make a Move.”

4. No show at the John W. Engeman Theater ends with a curtain; After each performance of Shrek, kids will be overjoyed to meet the cast- in costume! The actors line up in the Engeman’s lobby, signing programs in the colorful autographs of their characters (6 year-old girls will treasure their “Fiona” signatures!), making it an immersive experience for youngsters. As for Newsies, you can’t help but appreciate the newsboy caps and suspenders on the valets and concession employees, a playful nod to how much the Engeman celebrates the culture and essence of its shows.

5. Both shows are especially poignant in 2018. Along with other essential lessons, Newsies is a reminder of the power of the press and its ability to manipulate the emotions of its readers. Pulitzer (Tom Lucca) spits the words, “If it’s not in the paper, it never happened.” Alan Menken, Jack Feldman and Harvey Fierstein’s musical reinforces the idea that there is influence in numbers, and how the masses can come together to make change. In Trump’s reign, it is especially important to hear Katherine (Whitney Winfield) say, “Being boss doesn’t mean you have all the answers.” There is no bad time to revisit David Lindsay-Abaire and Jeanine Tesori’s Shrek the Musical, as it explores themes of compassion and appreciating our differences, whether it is in skin color, sexuality, or fairy tale animal species. This is an even more important message in these divisive days, and is essential for youngsters to witness.

6. (One for good luck!) A gem of a location in the heart of Northport, John W. Engeman Theater is a stone’s throw from independent restaurants and shops, as well as a scenic view of Great Cow Harbor. Drivers will be thrilled to find that parking isn’t a headache, as it is with most Long Island theatres; free valet parking is offered to all patrons, who can also wait for their cars while enjoying drinks in a renovated, comfortable lobby. Newsies and Shrek are that much more delightful, as their spirit remains with you as you make a full day out of your hassle-free theatre-going experience.

Visit EngemanTheater.com for more information about how to purchase tickets for Newsies and Shrek the Musical.