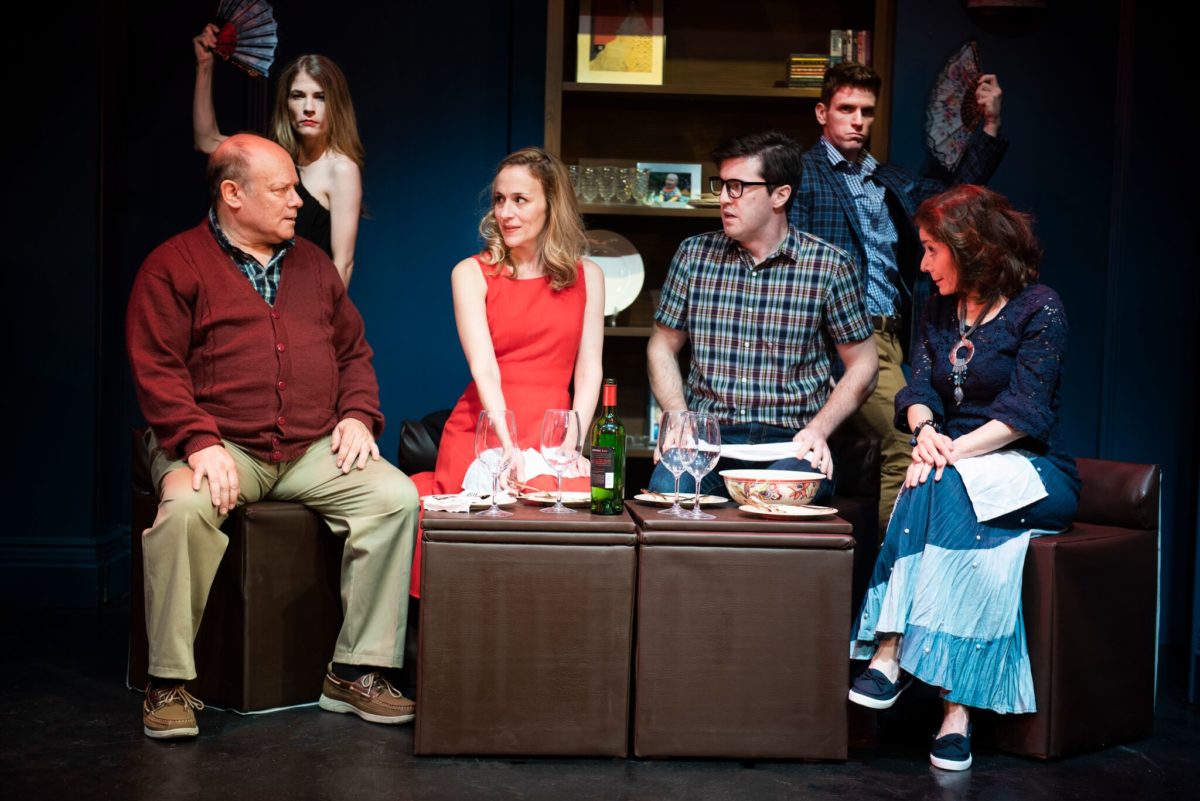 Fulsome as this is, it neglects to mention that neurosis can be portrayed on stage by actors behaving like the invisible best friends and advisors of those in whose heads they reside. Not to worry, though, as that little detail is the heart and soul—shall we say psyche?—of a whimsical new Off-Broadway musical. It’s called Neurosis: A Musical That Gets in Your Head, and it’s now playing in repertory with R.R.R.E.D.: A Secret Musical at the DR2 Theatre.

Andy Sandberg, who also directed R.R.R.E.D., is far closer to the target with this little show, whose book is by Allan Rice, music by Ben Green, and lyrics by Greg Edwards. Despite being essentially a conventional rom-com, with stereotypical characters, it survives its slightly overlong hour and 50 minutes without a nervous breakdown. Neurosis may not be as funny as it might be, but it’s animated, polished, and more consistently diverting than many similar Off-Broadway novelties.

The plot—Jewish boy meets shiksa, loses shiksa, and gets shiksa—follows a familiar path but adds a unique twist. The boy is Frank (Kevin Zak, also in R.R.R.E.D.), a struggling would-be magician, and the shiksa is Abby (Jennifer Blood), a marketing executive. The twist is that each is accompanied by an ever-present companion representing their inhibitions and insecurities.

These talking, singing, and dancing neuroses, generated more by Woody Allen-like tics than One Flew over the Cuckoo’s Nest disorders, appear as attractive, ordinary people, albeit with rather uninventive names. Frank’s, dressed in a plaid shirt and slacks, is called Neurosis (Brennan Caldwell), duh; Abby’s is Neurosalina (Morgan Weed), duh again, a sleek blonde whose black leather jacket and skintight jeans contrast with Abby’s red business dress. (Michael McDonald did the fine costumes.)

Every time the anxiety-ridden Abby and Frank must act decisively they get an earful of resistance from their anthropomorphized fears. We learn less about Abby (after a string of bad choices, she’s sure a Jewish boyfriend is the answer) than Frank.

One reason is that only he consults a shrink. Her name is Samantha (Lacretta), she uses her big voice to sing that there are “No Easy Answers,” and, though played with charm, is otherwise underdeveloped. Another is that only Frank’s parents—Geri (Susan Jacks) and Kenny (Joel Blum)—are seen, allowing further insights into his character.

Geri and Kenny are stereotypical New York Jewish parents; as per the time-honored trope, they hope their son will give up his dreams of being a magician, become a lawyer, and settle down with a nice Jewish girl. So when Frank brings Abby (one parent Protestant, one Catholic) home for a dinner of Geri’s brisket, the results are predictable. Threatened over the loss of her son, Geri bares her manicured nails in the show’s sharpest routine, the “Meet-the-Parents Tango,” which does a great job of exploiting the cliché it’s based on.

This intimate musical—the kind one expects to see at the York Theatre—originated at The Finger Lakes Musical Theatre Festival in Auburn, NY. Its lighting, by Jake DeGroot, makes the most of its opportunities on Charlie Corcoran’s neutral set, which serves acceptably for various locales, helped by small, adaptable, leather-covered units. Choreographer Shea Sullivan, working with more inspiring material than in R.R.R.E.D., provides several peppy dance numbers, like the above-mentioned tango and the spunky, hand-clapping finale, “Rock Your Neurosis.”

Neurosis has a thoroughly appealing cast, including Ian Michael Stuart in one minor role after the other. My favorites are Blum and Jacks, especially the latter as Frank’s smothering mother; they bring just the right tone of authenticity to the accents, intonations, expressions, and other behavior of Frank’s parents. I felt I knew these people personally.

Rice’s book makes no breakthroughs but handles its subject with sensitivity and wit (although the magician thread goes nowhere); Edwards’s lyrics support the story with clever rhymes and insights; and Green’s music, performed by an offstage quartet led by David Aaron Brown, has a generic but consistently entertaining show biz aura that gets the job done, and then some.

You don’t have to be neurotic to enjoy Neurosis. But it helps.

Neurosis: A Musical that Gets in Your Head