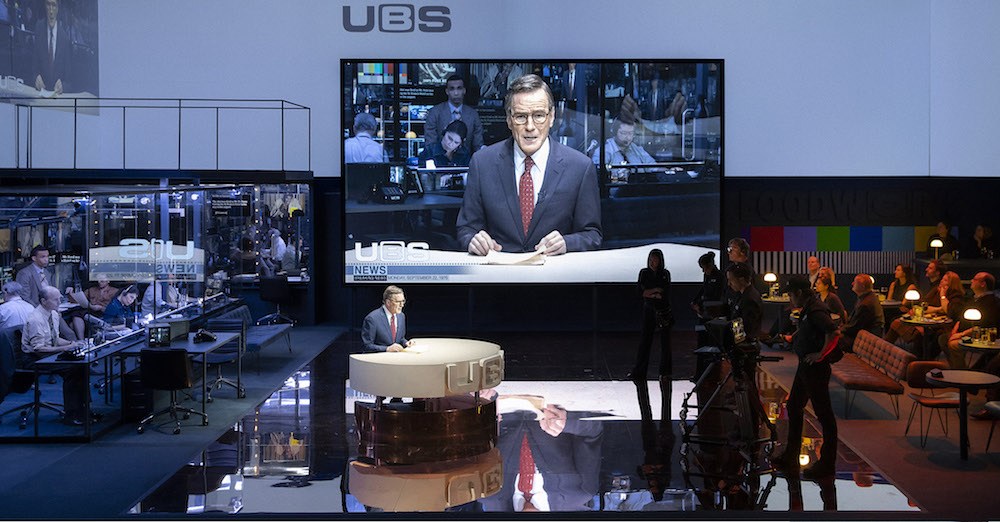 It’s that sense of voyeurism, mixed with snide scrutiny, that pervades and prevails throughout director Ivo van Hove’s work. From his early production of Moliere’s Tartuffe, at The New York Theater Workshop, where the audience observed the actors on TV screens digging through the rubbish on the street outside, to his adaptation of Visconti’s The Damned, in which the on-stage actors were interviewed and scrutinized by hand-held cameras, van Hove is the paramour/observer of the nefarious.

In Network, van Hove’s current production on Broadway, starring the incomparable Bryan Cranston as Howard Beale, the matter of voyeurism is blatant. Lee Hall’s screen-to-stage adaptation of Paddy Chayefsky’s titular film, starring Peter Finch and Faye Dunaway, follows Beale, the evening news anchor as he loses his mind on air, and gains millions of viewers in the process.  Although by the end, we get to ask whose voyeurism wins out. The public’s or the corporate giant’s?

Given the time period, the beginning of Ford’s presidency, “corporate giants” is a phrase that we get to hear frequently.  Of course, in the play, it relates to the corporate takeover of the fictional UBS-TV network. But the disturbing nature of restructuring, in and of itself, also equates with what is going on in  government today. Of course, the media of the moment is Twitter, not network news.

As we hear in voice over, from a character named, The Terrorist, “We live in a Society which has never been more technologically able to meet the needs of its people – yet year by year the technology far from ennobling its users is increasingly an instrument of political quiescence and social control. What is the effect of this ‘emancipatory’ technology? The rich are becoming exponentially richer while the majority are impoverished.” His rant continues to highlight the crisis of the environment, and the loss of civil liberties.

Designed by Jan Versweyveld, the set vibrates with the excitement of live television, with all kinds of lights and cameras and technical equipment, along with the anachronistic – dial up telephones and projections of TV shows, with footage of Billy Graham, and Princess Diana, along with commercials for Mazola Oil, and Bromo Seltzer.

In this satire, the Warm up Guy (Barzin Akhavan) arrives to keep the entertainment peaking. As the opening act for the live audience of the Howard Beale show, Akhavan is an athletic lead, exhorting us to “Applaud,” and hitting us with the show’s highlights, such as, “Amnesty International has come out against Marriage?”

As Beale’s boss, Max, and a man who claims to possess reason, Tony Goldwyn (Scandal) portrays a middle-aged man who loses his sense of selfhood through the degrading process of falsifying the news. Much to van Hove’s credit, the colleague with whom he has a dalliance, is not at all a femme fatale. His wife, an elegant, intense woman portrayed by Alyssa Bresnahan, is more eye-catchingly beautiful than Diana (Tatiana Maslany). Maslany is superb in the role of a woman who, driven by success, is only out for herself.

Meanwhile, Cranston is up to his old antics. Pulling his pants down on network television isn’t his only routine, clearly! He dazzles by being dumbfounded, glitters with uncertainty in a narcissistic, almost girlish way, and tethers on losing reality totally. And he gets us all to join him, literally, in his anthemic plug, “I’m mad as hell, and I’m not gonna take it anymore!”

How sophisticated or refined an image van Hove crafts of our contemporary socio-political demise, it hardly matters. The cheer and joy of the battling cry is enthralling. If there’s a rally that New Yorkers may go to, this is it!