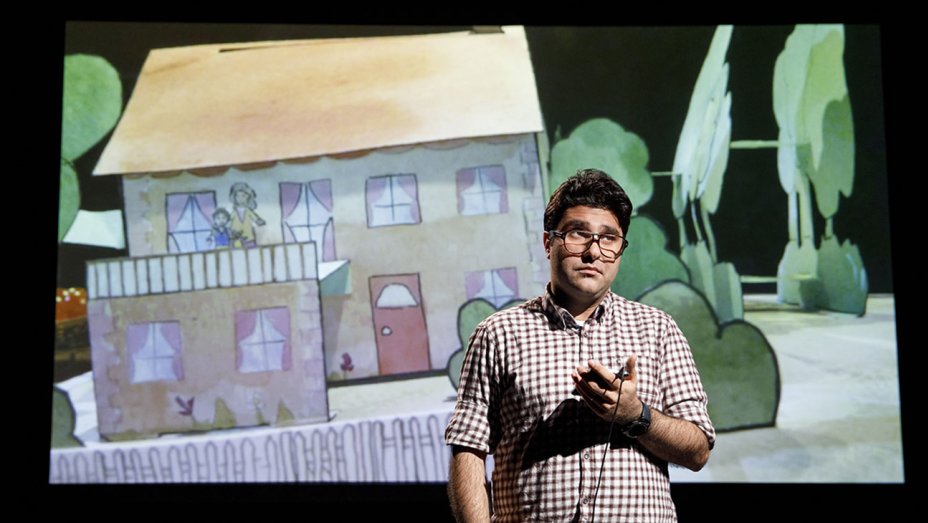 Produced by Barrow Street Theatricals and performed at City Center, the production hosts a different actor at each performance. Among those appearing in upcoming performances, are Richard Kind and Reed Birney.

Watching Amanda Quaid, at the show I attended, was fascinating because she is also an accomplished dialect coach. Surprisingly, she picked up Farsi with awesome finesse.

Written by Nassim Soleimanpour, the young Iranian playwright who recently came to the attention of American audiences with his production, White Rabbit Red Rabbit. Performed first in New York by Nathan Lane, the series of celebrities that followed, included Whoopi Goldberg and Cynthia Nixon.

When it opened in London, Soleimanpour, a conscientious objector who refused Iran’s mandatory military service, was not allowed to leave his country. Here, in Nassim, he appears on stage, well into the production’s 80 minutes. By now, we’ve had the opportunity to spend time with Quaid, who, casually attired, brings an instinctively lively, and inquisitive presence to this metatheatrical event.

We are here to enjoy the gift of storytelling, in a unique way.

Communicating in Farsi evokes Soleimanpour’s Proustian memories of his Iranian boyhood. He recounts feeling like an outsider in his own country, even then. Beginning with fairy tales, which Quaid reads from a large on-stage screen, we learn about the playwright, about life in Iran, and the national language of Farsi. Most importantly, we observe how language creates synergy between people, fostering friendship, building community, and as Levi-Strauss maintains, defining culture.

A few willing members of the audience join them on stage, and are given the task of speaking in Farsi. That they fail, only enhances the audience’s empathy with the theatrical experience, and highlights the obstacles we trip on, in our cross-cultural communications.

In Quaid’s deft hands the production is playful, humorous, sad, and always, of the moment. The text is projected on a large on-stage screen, in the style of a graphic novel. Nassim is not an essay, nor is it didactic.

Language is love. Soleimanpour calls his mother From the stage, speaking their mother tongue. Inventive, and elusive, the production takes us on an odyssey, much like the playwright must have experienced, in discovering Western culture.