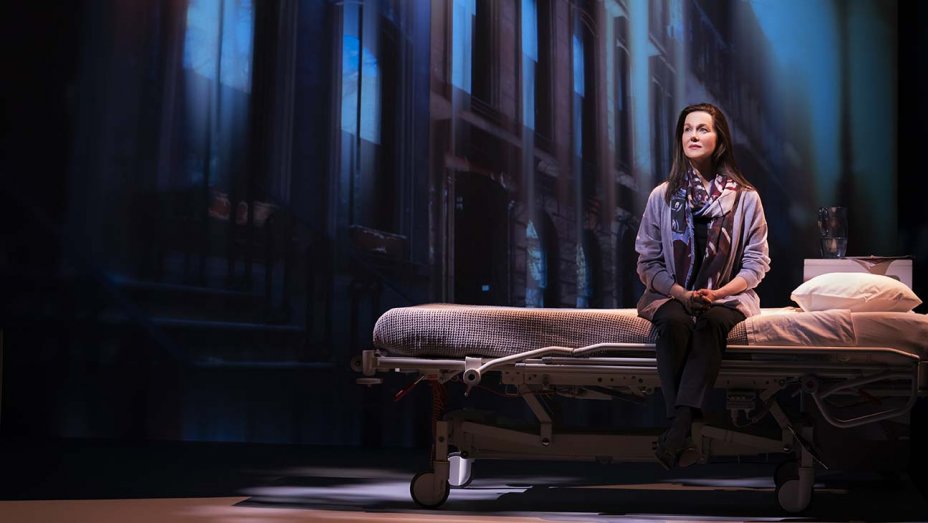 As transparent as she is mysterious, as lucid as she is troubled, as connected to herself as she is to the audience, Linney is an actor one just loves watching. And the story she tells us is about a woman who gently and profoundly strikes a chord with our collective unconscious in a way only a woman’s story can. It’s about mothers and daughters.

Adapted to the stage by Rona Munro from Elizabeth Strout’s novel, this one-woman monologue of sorts, soars with musicality. The language while simple, is also beautiful.

It lives in a space that Lucy (Linney) shares with her mother in a nondescript hospital room. While not on her death bed, Lucy strives to share and understand their difficult relationship, a painful past. Raised in the sparsely populated farm town of Amgash, Illinois Lucy’s experience of childhood poverty reveals more about her emotional deprivation than economic.

This is her midwestern mother’s first time in New York City – a place she describes as having no sky. Fortunately, Luke Halls’ video projections through the window of her room show a vast skyscape, a looming Chrysler building, alongside the corn fields where Lucy was raised.

As a child, Lucy recalls her mother often struck her “impulsively, vigorously.” When Lucy began to develop breasts, her mother told her she looked like the cows in the neighbor’s barn. Scorned by her peers, forced by her father to thank God for the food they ate, even though it was often molasses on bread, Lucy leads us through the blind alley of her childhood.

“How do children become aware of the world and how to act in it? How do you even know what you look like if the only mirror in the house is a tiny one high above the kitchen sink?”

Glimpsing at life through the tiny window she had as a child, Lucy’s experience was loneliness. Her escape was reading. From the truck where she was housed on many days until the age of five, either because her parents were working or for punishment, she learned to calm herself with her own stories and fantasies of release. Desperation was her inspiration.

“I dreamed of not being cold, of having clean sheets, clean towels, a toilet that worked, and a sunny kitchen. I allowed myself into heaven this way.” Lucy reveals.

At heart it is a simple and simply told story. “We only have one story,” Lucy opines. “It’s alright to tell it over and over.”

Linney portrays both the voice of the narrator, Elizabeth Strout, and the central character in Strout’s novel. At times she also captures her mother’s twang. At other times their voices morph into one.

Directed by Richard Eyre with sophistication and humility, this production which originated in London, lives in the transformative power of storytelling.