All For One Theater (AFO) is pleased to announce the return of Gideon Irving’s  My Name Is Gideon: I’m Probably Going To Die, Eventually, which is being brought back due to popular demand.  The show will begin performances at The Brick Theater (579 Metropolitan Avenue in Williamsburg, Brooklyn) on  Friday, November 30th for a limited engagement through Thursday, December 15th 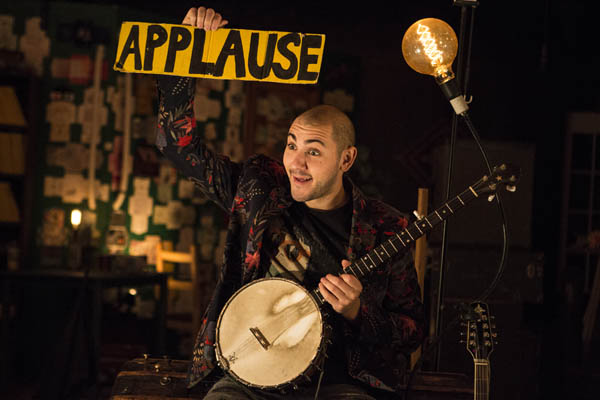 My Name Is Gideon: I’m Probably Going To Die, Eventually, received tremendous accolades in 2016 from critics and audiences alike when it played Rattlestick Playwrights Theater (November 17th through December 11th). The run was sold out and will now be available for additional audiences. Irving is an unconventional theatrical home-show performer who has been biking, rollerblading, and driving from one town to the next for the past six years, performing and residing in the homes of perfect strangers in nine countries.  Gideon will continue to invite audiences into his own living room on the NY stage, bringing them “Stove Top Folk” – his unique blend of songs, stories, and underwater levitation, jam-packed with curiosities and surprises.

The New York Times said: “Gideon is so easygoing and free of cynicism that you may contemplate hosting him too.  I’ve considered inviting him to my place.” The New Yorker raved: “Gideon is like Pee-Wee Herman’s hootenanny cousin, springing delightful surprises on his guests.” Stephen Sondheim extolled: “The show is eccentric and exhilarating – the best possible combination.”  NY Theatre Guide acclaimed: “My Name Is Gideon: I’m Probably Going To Die, Eventually, is the most fun and best play date you could ever wish for.”

My Name Is Gideon: I’m Probably Going To Die, Eventually has been developed over the course of 620 performances in living rooms around the world. The resulting theatrical excursion in storytelling is rooted in song and surprise, featuring more than 15 instruments – among them, the banjo, bouzouki, waterphone, shruti box, mbira, whirly tube, and scacciapensieri. Gideon’s expedition continues as he looks for a new place to stay each night, relying on the audiences’ hospitality.

“The heart of what I do has emerged from playing in people’s homes,” Irving says. “The show, the music, the communion, the travel, and the relationships are all interwoven. The challenge and the joy of bringing my show into a theater is in discovering how to maintain and play with that intimacy I’ve found in homes.”

Since 2012, Gideon Irving has been playing shows, amalgams of music, stories, and other theatrical curiosities in people’s homes — across England, Scotland, Germany, New Zealand, Australia, Canada, Japan, Nepal, and the U.S. Using a menagerie of instruments, he describes his style as Stove Top Folk, “a bit of this and some of that.” He has toured home to home by a bicycle towing a trailer, on rollerblades pushing a modified shopping cart, and driving automobiles. In 2019 Gideon will embark on his most ambitious project to date, a 5,000 mile horse tour across the United States.

Building his tours through connections made by audience referrals on good old-fashioned maps after each performance, and staying with his hosts along the way, Gideon is building a global and committed network of hosts and audiences. In 2015, he was commissioned by The Foundry Theater to create a new home show presented in 45 NYC apartments. In 2016 AFO co-produced, along with Richard Jordan Productions, his solo show, My Name Is Gideon: Songs, Space Travel, and Everything In-Between at The Pleasance as part of the Edinburgh Festival Fringe.  They have also presented  My Name is Gideon: I’m Probably Going to Die Eventually last year at Rattlestick Playwrights Theater.  He has also performed his two-man home-show The Gideon and Hubcap Show in homes domestic and abroad – as well as a run at the 2015 Edinburgh Festival Fringe.   Gideon has been covered by The New York Times, The New Yorker, The Atlantic, Vice, Time Out NY, The Village Voice, Culturebot, Howlround, BBC, Broadway Baby, The Mumble, The Herald (Scotland), TV Bomb, and several New Zealand publications and TV shows.  Gideon also has performed a children’s show with his two man show partner Dr. Hubcap “Nate” Sloan entitled The Gideon and Hubcap Show For Kids and Everyone Else.

All For One Theater (AFO) is rooted in the belief that extraordinary solo theater is unique in its ability to deliver life-changing stories, speaking with passion and intimacy that compels us to lean in, learn, relate and revel, while offering a range of topics and experiences as diverse as humankind itself. AFO is committed to producing and developing the most extraordinary solo theater, and to creating sustaining careers for solo artists. AFO believes that the heart of solo theater exists in the search for the universal within the individual, and is committed to the brightest writing, performing, and directing talent in the solo world.

Richard Jordan Productions is an Olivier and Tony Award-winning production company based in London, under the artistic leadership of producer Richard Jordan. Described by The Stage newspaper as “one of the U.K.’s most prolific theatre producers”, Richard Jordan Productions has produced over 230 productions (33 New York City presentations) in the UK as well as 24 other countries, including 75 world premieres and 81 European, Australian or US premieres and been the recipient of over 60 major theatre awards. The company produces and collaborates with many of the world’s leading theatres and has been at the forefront of developing and presenting works by a diverse range of established and emerging UK and international writers and artists. In 2013, Richard became the first British producer to have won every notable Broadway and off-Broadway Best New Play Award.

The playing schedule for My Name Is Gideon: I’m Probably Going To Die, Eventually is as follows:  Wednesdays through Saturdays at 7PM and Sundays at 4PM through December 15th.