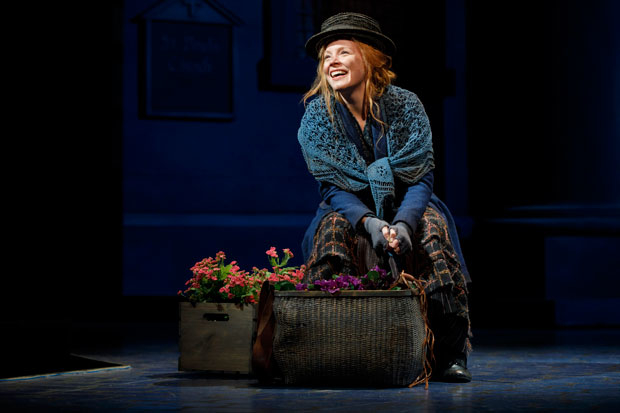 In Bartlett Sher’s spirited production, the satire of Shaw’s Pygmalion, on which the musical is based, shines with classic charm. After all, a woman who starts out complaining “all I want is a room somewhere,” and ends up the belle of the Embassy Waltz, declaring, “I could have danced all night,” has arrived at the fountain of feminist reckoning.

Fortunately, the production is anything but staid. Just hearing Lerner and Loewe’s unforgettable songs, I Could Have Danced All Night, On the Street Where You Live, I’ve Grown Accustomed to Her Face is incredibly invigorating. The lush orchestra (Ted Sperling, Music Direction), and the set with staircases that lead to more staircases (Michael Yeargan, Set Design), makes the action as lively as a Marx Brothers comedy.  Lifting this gem of musical theater from its celluloid mausoleum, is a gift indeed.

Much of this rests on the finesse of these fine actors. As Eliza Doolittle, Lauren Ambrose is a rush of fresh air, with a beautifully-trained singing voice that is surpassingly sweet and beguiling.  A delightfully understated actor, her Eliza has the air of being childishly devious, albeit righteous and golden-hearted. Indeed, Ambrose creates the character of Eliza, rather than the icon Audrey Hepburn made of her.

Playing the invincible, unassailable Henry Higgins, Harry Hadden-Paton is way too handsome to be dismissed. He gives us the sense that he’s an easy-going actor, still the character he builds is sonorous and powerful. And Allan Corduner as Colonel Pickering is an adorable, familiar feeling sidekick.

Meanwhile, Diana Rigg makes a nostalgic return to the Broadway stage, as Henry’s mother – his avenger of sorts. A sophisticated woman of means, Mrs. Higgins is not to be conned by a man, even if it is her own son. And, in a robust turn as Alfred P. Doolittle, Norbert Leo Butz demonstrates once again his range as an actor, and unabashed gifts as an entertainer. Portraying the clownish, alcoholically enabled good-for-nothing, Eliza’s father, Butz is a veritable soap box on the failures of middle class morality, and the merits of usury.

True to Shaw’s wont, the poor flower girl who learns to speak overcomes the great divide that separates the classes. And Eliza’s transformation into an elegant, fashionable, well-healed woman, speaks to the power of innocence, the bounty of education, and the irresistible force of a woman’s charm.

To that end, Christopher Gattelli’s choreography of waltzes are a statement in grace, as well as satire. More than a guilty pleasure, My Fair Lady, is a joy, an undaunted celebration of emancipation.