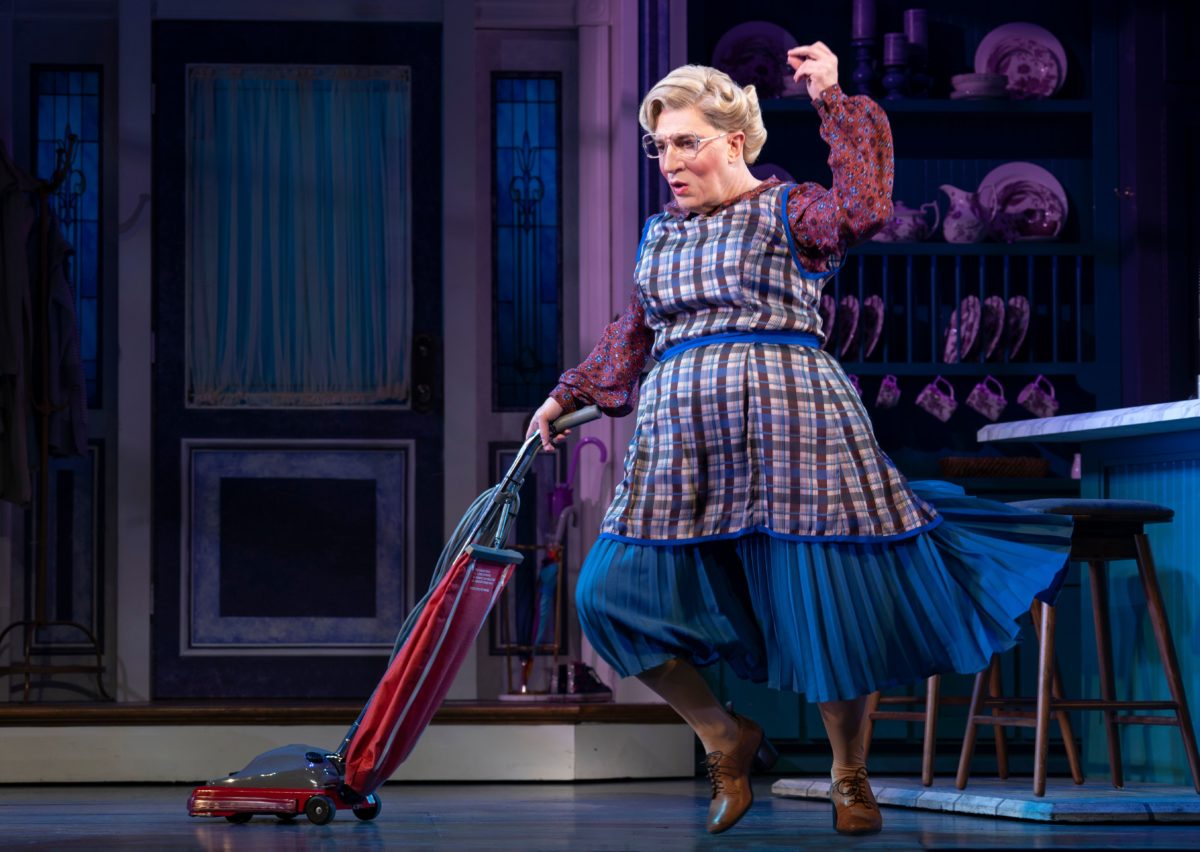 Replicating such iconic performances is a near-impossible task for the talented players in the Broadway musicals based on such movies, such as Santino Fontana in the now departed Tootsie and Rob McClure in the recently reopened Mrs. Doubtfire, although they do their damnedest to reincarnate the originals.  However, the premises in each case are so farfetched that, when transmuted into the already heightened atmosphere of musical farce, the required degree of exaggeration establishes a world so cartoonish that, whatever degree of verisimilitude was captured on film vanishes. The result? Over-the-top performances that are only flickeringly satisfactory on an emotional or even comedic level.

After its spring 2020 opening was postponed because of Covid, Mrs. Doubtfire opened at the Stephen Sondheim Theatre and was widely reviewed in December 2021. I had tickets for January 9, 2022. By that time, however, the Omicron variant was spreading rapidly, so, having also recently experienced a health issue, I canceled, only for the show itself soon after to close shop for several months. It reopened in mid-April and I caught up with it this week.

As fans of the movie will recall, Mrs. Doubtfire, set in San Francisco, is about a devoted dad, Daniel Hillard (Mr. McClure, Chaplin), who raises his children more as a lovingly prankish man-child than the responsible father his long-suffering wife, Miranda (Jenn Gambatese), keeps hoping he’ll become. Unable to handle his immature antics any longer, Miranda divorces him and gets custody of their three kids, little Natalie (Gail Prince the night I went), preteen Christopher (Tyler Wlandis when I went), and teen Lydia (Analise Scarpaci). The limited amount of time Daniel, whose acting specialty is doing character voices, can spend with his children can be increased, however, if he lands steady employment. Learning that Miranda, busy with building her fashion line, will hire a nanny to oversee the kids, Daniel crafts the persona of a Scottish-accented nanny, the elderly Mrs. Doubtfire, and fools Miranda into hiring him. From this premise, even those who don’t know the rest should have a good idea of the zany confusions and happy resolutions that follow.

Is it entertaining? On a superficial level, yes. Most of the time, veteran director Jerry Zaks’s pacing is—as per his expertise—upbeat, energetic, and breathless. The comic shtick, verbal and physical, is fast, furious, and frequent, and even sourpusses like me will have an occasional laugh tickled out of them. I must admit that my plus-one, a multiple-threat theatre professional and writer, was having a much better time than me.

Lorin Latarro’s choreography is clever enough—a routine with the company dancing with brooms stands out—although the mundane dramatic circumstances are not such as to inspire many similar breakthrough moments. Wayne Kirkpatrick and Karey Kirkpatrick’s music and lyrics are pleasant enough, but too many songs are narrative-driven, which reduces their emotional drive. Although well performed, few hit the sweet spot that makes you want to hear them again the minute you leave the theatre. Miranda’s “Let Go” is one of the few numbers approaching a standard ballad, and there’s a big-voiced song, “Playing with Fire,” belted by Wanda Sellner (Charity Angél Dawson), the custody official overseeing the Hillard family’s case. Coming fairly late in the proceedings, it sounds like an eleven o’clock number, but, for multiple reasons, including being sung by a secondary character, isn’t.

Visually, everything looks fine. David Korins’s multiple sets, expertly lit by Philip S. Rosenberg, allow for the episodic book (by Karey Kirkpatrick and John O’Farrell)—close enough to the film script to satisfy most fans—to move with cinematic celerity from locale to locale, using siding stages and units that rise and fall. Catherine Zuber provides colorful costumes—with clever ways to handle the many quick-changes (one of the show’s greatest delights)—and Tommy Kurzman invents outstanding makeup and prosthetics that deserve an award of their own. Bewigged (by David Brian Brown), rubber masked, and fat body-suited, Mr. McClure looks very much the way you’ll remember Robin Williams on the screen.

There were several understudies doing due diligence the night I went, none, however, having a Shirley MacLaine moment; regardless of the good work being done by the ensemble, Mrs. Doubtfire lives or dies in its leading man. As his role demonstrates, Mr. McLure is more than a triple-threat singer-actor-dancer; he also has the versatility that allows him to do the vocal prestidigitation that made Williams famous, or at least to serve as a suitable Williams avatar. Which, however, is also a problem, as he’s a substantial step away from possessing Williams’s remarkable creative force, forced by necessity to do similar material at a remove. Ironically, I found his Charlie Chaplin in Chaplin similarly problematic.

As necessitated by the script, Daniel/Mrs. Doubtfire rarely has a moment when he’s not “on,” shifting voices and accents, changing costumes, or making jokes. The performance is a tour-de-force marathon of technical mastery, played largely at top speed and full vocal throttle, with a particularly demanding nightclub scene where—as a Flamenco number fronts the action—Mr. McClure makes multiple quick changes before the jig is up. Like the show itself, none of it is the least bit believable, but you have to admire the enthusiasm and invention that keeps it going.

As the loud and often raucous show runs out its two and a half hours, you may feel almost as pooped from watching it as the actors themselves, by all normal standards, should be by the final curtain. But when the tireless Mr. McClure, looking fresh as a daisy, delivers a vibrant pitch for Broadway Cares during the curtain calls, he and his company look like they could go another 10 rounds. Only time will tell if Mrs. Doubtfire itself has similar stamina.