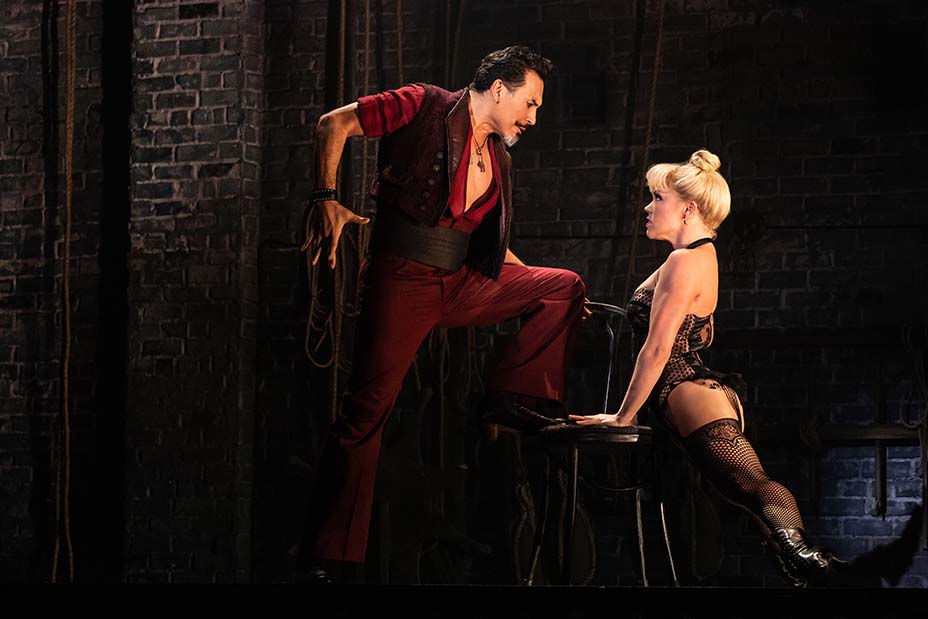 Ricky Rojas and Robyn Hurder in Moulin Rouge! The Musical

With a book by John Logan, the romance that emerges is a recreation of the opera, La Boheme. Depicting the edgy lives of the Bohemians in Montmartre – the poverty, and disease that ruined them, and the romance that drove them beyond despair – with contemporary sensibility delivers impact. Justin Levin’s arrangements of popular songs by Cat Stevens, the Rolling Stones, and Madonna, to mention a few, are exquisite – vibrant, and lushly orchestrated. And the scenic elements (Derek McLane), like those in Natasha Pierre and the Great Comet of 1812, engulf the audience in the ongoing life of the famed music hall.

As directed by Alex Timbers, (Bloody Bloody Andrew Jackson), the show is a total immersion, an environmental experience in which the life on the stage of the Moulin Rouge becomes a real time event. As metatheater, the narrative involves creating a new musical for the famed music hall, now falling into financial distress.

The choreography, inspired by the frolic of the music hall, and social dances like the Can Can, is far from the gymnastic vigor of many a juke box musical. Two-time Emmy nominee for So You Think You Can Dance, Sonya Tayeh brings her sense of popular steps and ball room dancing. Still, it’s her foundation in the modern dance of Martha Graham that distinguishes her style of movement.

Clearly, the show is all about heightened production values. There is even pre-show entertainment to allure followers of Camp. Justin Townsend’s lighting is self-consciously theatrical. And Catherine Zuber’s costumes, from the show girls’ wardrobes, to the period costumes worn mostly by men, are colorful, as well as credible.

The production is well cast. As Satine, the star of the music hall, Karen Olivo makes some quick wardrobe changes from show girl to sophisticated Parisian lady, but her heart does not transform so quickly. Like Mimi in La Boheme, she suffers a tragic fate. Torn between two lovers – Christian (Aaron Tveit) the poor starving composer, and The Duke (Tam Mutu), she follows her Bohemian heart.

Olivo gives a standout performance, and a soulful one. She sings beautifully, as does Tveit. Portraying the Duke as an icon of capitalist evil, Tam Mutu sustains a threatening presence.

As the MC of the Moulin Rouge, and the actor who plays Satine’s love interest in the musical within the musical, Danny Burstein is a rock star. It’s a much edgier role than he’s played on Broadway previously. Buoyant, bouncing around the stage like a daredevil and a diva, he outspokenly commands this stage.