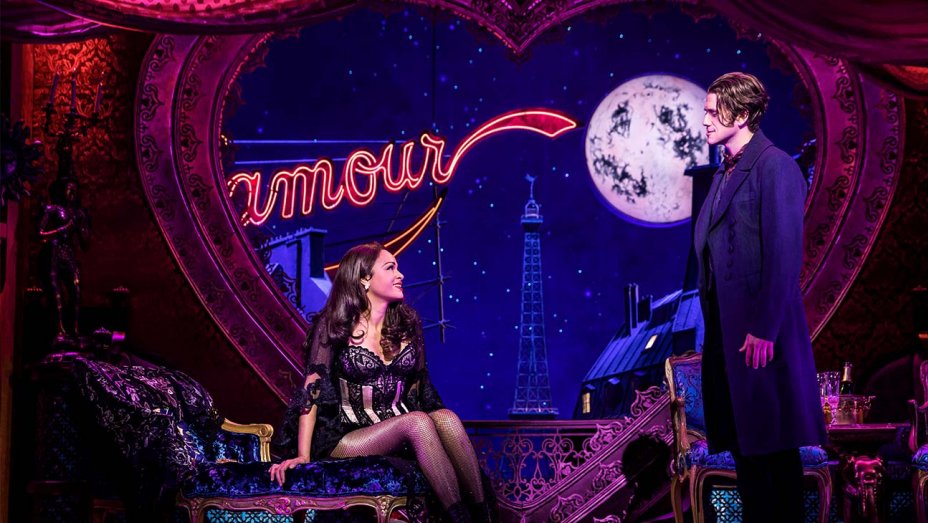 Karen Olivo and Aaron Tveit in “Moulin Rouge! The Musical”

The experience begins as patrons enter the Al Hirschfeld Theater, whipping our their phones to take photos and pose for selfies in front of Derek McLane’s dazzling recreation of the infamous Paris nightclub. Chorus members clad in Catherine Zuber’s stunning and scanty costumes stroll on stage for more ogling and snapping. When the show begins, Alex Timbers’ rapid-paced direction and Sonya Tayeb’s athletic choreography move the proceedings along so quickly and entertainingly, you scarcely have time to catch your breath or give the limp storyline a second thought. By the time we get to the joyfully exuberant curtain-call finale, complete with the male dancers in top hats and tutus (my favorite touch), you’re ready to bound to your feet for the obligatory standing ovation (actually well-deserved, given the mostly outstanding performances.)

But what, if anything, is the show (or Luhrmann’s film for that matter) all about other than having a good time? Perhaps nothing or just the repetition of cliches about love found in the 70-plus pop songs which make up the jukebox score. (Licensing fees for the cavalcade of Top 40 hits taking up two pages of tiny print in the Playbill is another factor in Moulin’s sky-high tickets.)

John Logan’s book adheres closely to the screenplay by Luhrmann and Craig Pearce which is largely borrowed from the 1852 warhorse La Dame Aux Camilias later adapted into the opera La Traviata and the Greta Garbo film classic Camille. In 1899 Paris, penniless American songwriter Christian (Aaron Tveit in fine voice) is engaged in a secret affair with Moulin Rouge headliner Satine (exquisite Karen Olivo) who is kept by the possessive Duke of Monroth (dangerously sexy Tam Mutu). The jealous Duke is bankrolling the nightclub and Christian’s musical—which bears a striking resemblance to the plot of the show containing it. Like a hundred other melodramatic heroines, the noble Satine has a fatal illness, the Duke threatens Christian, and you can guess the outcome.

Fortunately, Timbers’ slick, sleek production distracts from the book’s shortcomings and the skilled cast invents depths where none exists. Olivo makes the deepest investment, convincingly creating an inner life for this charming courtesan. Not only does she powerfully put over Satine’s socko numbers—melding Marilyn Monroe, Madonna, Beyonce, and Katy Perry yet retaining her own persona—but she imbues the hackneyed tropes with honesty and passion. Tveit does warble with grace and power, but he fails to supply the necessary electricity to connect with Olivo. Danny Burstein takes up as much slack as possible as Harold, the club’s flamboyant emcee, slyly evoking Joel Grey and Alan Cumming in Cabaret and Ben Vereen and Patina Miller in Pippin. Sahr Ngaujah, Ricky Rojas and Robyn Hurder also provide dynamic sparks in supporting roles.

Moulin Rouge is a gorgeous but hollow mashup of well-worn plots and pop hits. Luis Alfaro’s Mojada (Spanish for a derogatory term for a recent immigrant)at the Public Theater, also takes familiar material as its source. The story of Medea is even older than that of Camille, but Alfaro makes something contemporary, relevant and thought-provoking out of it. Just as the original protagonist was a foreigner in a hostile land and abandoned by her husband, this Medea is lost in her new home and responds with vengeance. But unlike the original, Alfaro’s creation is not a venomous virago, but a victim of political and social forces beyond her control. This Medea is an illegal immigrant living in Corona, Queens (Arnulfo Maldonado created the realistic back yard set). Jason her spouse works for the ruthless Pilar, a Cuban emigre with designs not only on taking Jason, but on becoming a mother to Acan, the couple’s young son. Pillar’s scheme is made possible by Medea and Jason’s undocumented status which gives the drama a devastating immediacy. The cliche “ripped from the headlines” was never truer. “I could call ICE on you tonight myself,” Pilar threatens Medea and the words shoot out like deadly ice missiles.

Chay Yew’s direction balances the mythic scale of the original with a detailed accounting of the everyday, just as Alfaro’s script does. The heroine’s story is harrowing including a nightmarish recreation of her family’s arduous journey from Mexico to NYC, yet it’s always believable, even the terrifying climax. No spoilers, but if you’re familiar with Greek tragedy, you’re ahead of the game. Sabina Zuniga Varela’s Medea is heartbreakingly tender even as she renders bloody retribution. Alex Hernandez makes for a virile, yet self-centered Jason. Ada Maris is a slippery schemer as Pilar, Socorro Santiago captures the fierce wit of the family servant, and Vanessa Aspillaga nearly steals the show as a chatty food-cart vendor.

The Public is presenting another production combining classic and modern templates and like Mojada, it resonates with our present moment of political dysfunction. Director Daniel Sullivan transports Shakespeare’s Coriolanus from ancient Rome to a post-apocalyptic future on Central Park’s Delacorte stage. Set designer Beowulf Boritt creates a Mad Max fantasy world of burnt-out autos, discarded metal and junked plastic bottles. The grain famine which drives the Roman citizens to desperation becomes a water shortage in a nuked-out wasteland. Their madness turns to anarchy as they are manipulated by self-interested tribunes to banish their haughty military leader Coriolanus.

The play is infrequently performed because the titular soldier is so inflexible and rigid. Yet Jonathan Cake captures not only the physicality of this muscular role—it’s believable everyone is afraid of him—but also shades Coriolanus’ stubborn dignity. He transforms from war machine to bawling boy in the presence of his mother (a magnificently domineering Kate Burton) and back to raging tiger. Teagle F. Bougere and Tom Nelis are appropriately sage as two elder statesmen and Jonathan Hadary and Enid Graham convincingly represent the petty jealousies of the tribunes. Sullivan’s blasted-heath vision is a perfect fit for Shakespeare’s tale of modern-day political manipulation and madness, demonstrating that in the right hands familiar themes can be given vital, new, and dangerous life.