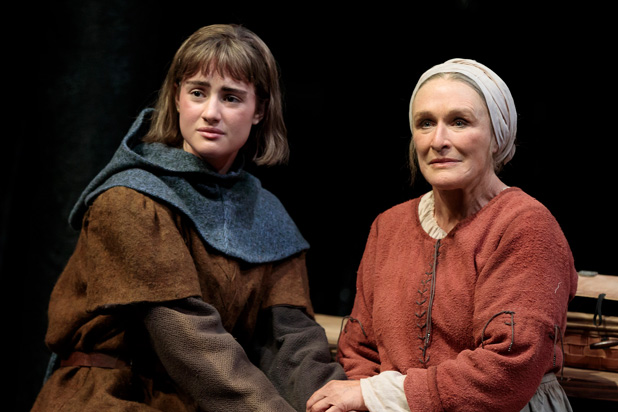 In the age of #MeToo and female empowerment, Joan of Arc has emerged with new relevance. Issues of women’s roles in current society as well as political and religious manipulation can be found in the story of the 15th century French peasant teenager who claimed to receive visitations from saints, rose to lead an army against the invading English, and was ultimately burned as a heretic. Recent incarnations of the Maid of Orleans have included Joan of Arc: Into the Fire, a derivative rock opera at the Public Theater in 2017 and a tepid Broadway revival of George Bernard Shaw’s Saint Joan in 2018.

The only moments that really had any impact in that misbegotten musical came at the very end when Mare Winningham as Joan’s mother pleaded before a council of clerics for her daughter’s verdict of blasphemy to be reversed. Playwright Jane Anderson, who has explored women’s complex roles in such works as The Baby Dance and the current film The Wife, focuses on this character in her new work Mother of the Maid, also at the Public. The result is a mostly effective, unexpected portrait of an historical figure and her world, largely thanks to the stunning lead performance of Glenn Close in the title role.

Close, who also stars in Anderson’s The Wife, turns in one of her signature emotional roller-coaster turns, combining subtlety and theatricality as she conveys Isabelle Arc’s pride, wisdom, and compassion. The play opens with Close as Isabelle directly addressing the audience in the third person, setting the scene of her rustic hardscrabble existence which is about to be shattered by her daughter’s meteoric rise to national savior. Close skillfully charts Isabelle’s journey from a simple, oppressed farm woman to the bewildered mother of a saint to fierce advocate for her daughter’s freedom from a death sentence. She delivers a full range of deeply-felt reactions including touching humor when confronted with the dazzling amenities of the royal court (watch as she slowly gets drunk on mead) and heartbreaking pain as Joan is carried off to the fire. Grace Van Patten is a powerful Joan and Dermot Crowley is rough, wily and relatable as Jacques, Joan’s bear-like father.

The play itself presents Joan’s brief, rocket-like career from Isabelle’s point of view and the playwright’s contemporary perspective. Isabelle often describes her child as a remarkable woman challenging male authority as if she viewing the proceedings from the 21st century. Modern expressions such as “Good to go” and “We’ve got your back” stick out. Anderson’s script does draw insightful parallels between Joan’s era and our own (Jacques points out his daughter is being used by both the French and English governments and her brother calls her a celebrity so, he reasons, no harm will come to her.) But the play wildly veers from tearjerking drama to boisterous sitcom and director Matthew Penn fails to find a happy medium.

The new musical version of King Kong, imported from Australia, also recast its female lead with a modern slant—as well as its title character. Ann Darrow, the role originated by Fay Wray as the quintessential screaming damsel in distress, is now a roaring warrior (a feisty Christiani Pitts) on equal footing with her giant simian captor, here seen sympathetically as a victim of greed and exploitation rather than a horrifying monster. Similar updating took place in the 1976, 2005 and 2017 film remakes of the 1933 original.

But none of the human characters in Jack Thorne’s scanty book register as more than props for the real star of this show—a 20 foot-tall, 200-pound animatronic puppet which displays more honest emotion than any of his flesh-and-blood castmates. Operated by a small army of manipulators, the Kong puppet dominates the stage of the Broadway Theater, providing thrills as it lumbers close the first row and seems to run through a 1930s New York and the creepy Skull Island (created by Peter England’s atmospheric video and scenic design.) Puppet designer Sonny Tilders and “Kong/Aerial Movement Director” Gavin Robins deserves a special Tony Award or the Drama Desk which creates a puppet design category a few seasons back. Kudos also to sound designer Peter Hylenski for creating a frightening aural experience.

As for the non-Kong portions of Kong, from Eddie Perfect’s less-than-perfect pop songs to the broad acting, they are simply marking time until the great ape makes his entrance. Director-choreographer Drew McOnie does keep the action moving at a fast pace, so much so that this audience-thrill ride feels as if it belongs at Universal Studios in Orlando rather than on Broadway. If all you’re after is theme-park attraction and credible book, score and characters aren’t that important to you, Kong is king.