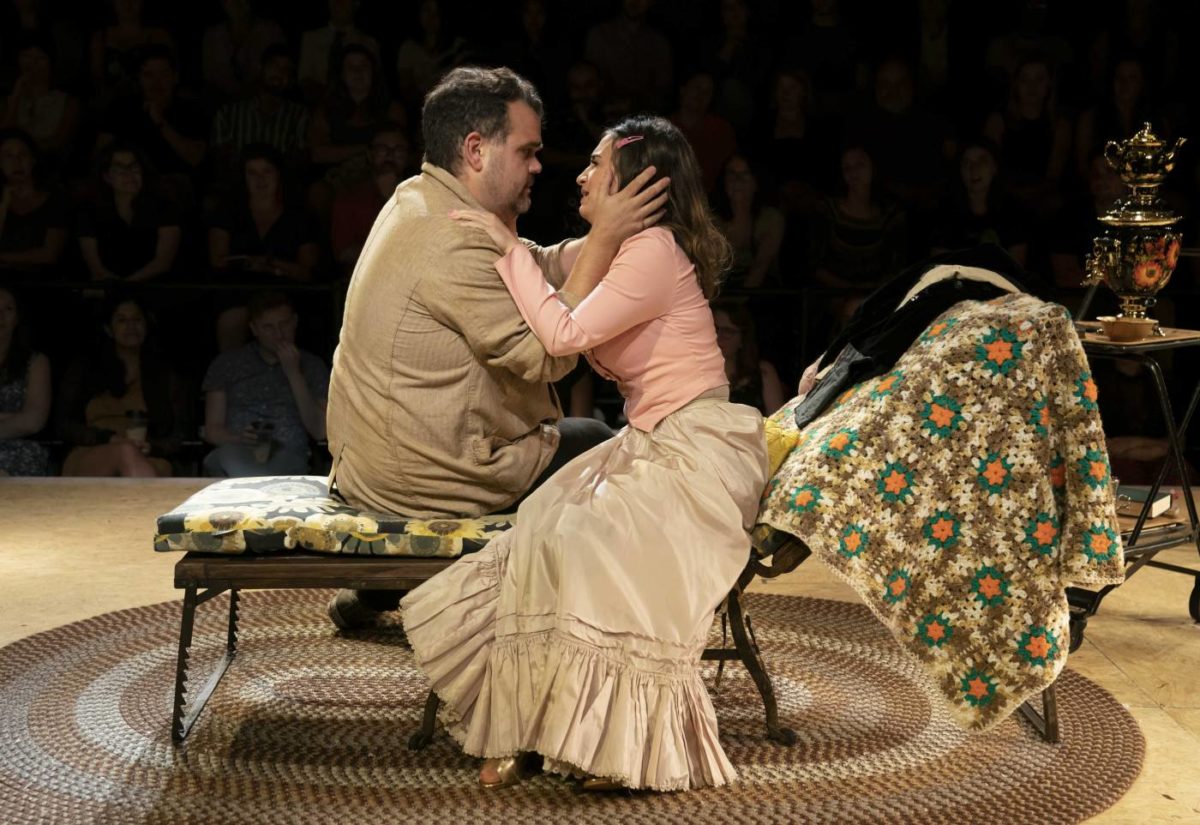 To appreciate Feiffer’s theatricality and humor, it won’t be necessary to reread Chekhov. However, it would be a good idea to watch a boring classical drama, produced in traditional fashion. Evoking that ants-in-your-pants feeling is at the heart of Feiffer’s metatheater. This production gives us a sense of how the sisters feel, contained in a small town, however ironically, just an Uber ride away from Moscow. Yet, in spite of all their dreams they can’t get there.

Blending heavy metal music, rap, and contemporary dialogue, such as Irina’s “smash the patriarchy” definitely gives a new slant to this work. As Treplev in Chekhov’s The Seagull says, “new forms we must have.” One wonders how the playwright would feel about this one.

There are lots of surprises being hurled at us here. Irina’s birthday party/picnic with pink paper plates, Solyony’s affectionate dueling with Baron Tuzenbach using a bottle of spray cologne, and Natasha’s breast pump which she nakedly bears, looks like an instrument from a sci fi feature.

Observing these characters on the cliff of despair, we become immersed in their frenzy, as if we were on a roller coaster ride at a carnival. The circus metaphor is boldly employed here.

Without exception the actors are standouts. As the oldest sister Olga, Rebecca Henderson is commanding in her unhappiness, delivering dialogue with such a droll and heavy hand that she looks wacked. With her classic retort, “every night is the worst night of our lives,” she fulfills Natasha’s, her sister in law’s expectations of a comic book villain.

In the role of Natasha, Andrei’s wife, Sas Goldberg is outrageous. Boundless in her contemptuous behavior toward her sisters-in-law, she flaunts whatever she can find to flaunt. Her imagination is wildly nefarious, a stand-out of balls to the wall comedy.

The most despondent of the three sisters, Masha, is portrayed in gender bending fashion by Chris Perfetti. When Masha dons a veil to cover her pain, she looks, and acts, like Olivia de Havilland in My cousin Rachel. There is something a little shady about this pain of hers.

As Andrey, Greg Hildreth, is a quintessential existential millennial with no interest in changing that. And Alfredo Narciso’s Vershinin, an icon of super dramatic acting, looks like he walked out of a Bollywood movie. In that regard, he’s kind of on his own here…a bit of an outsider.

No less alarming, Steven Boyer mines his ability to scare an audience, while remaining coolly aloof and contained within himself. Still, the most startling performance is Matthew Jeffers’ as Solyony. The way Jeffers, a little person, plays this quirky character is off the charts, and close to the bone.

Designer Mark Wendland’s boldly colored fresco of Moscow, framed with neon lights, reflects the action and mood of the ongoing life, with red lightbulbs flashing during the sex scene, and flames blazing through the backdrop for a fire – the one that destroys the sisters’ home. Paloma Young’s costumes are equally unpredictable, and definitely make for character statements.

No matter how often you’ve seen Chekhov’s play, you’ll be surprised by the ending.