November 18, 2021: Stealthy, indeed, is a quality that distinguishes playwright Simon Stephens, whose latest work, “Morning Sun”, is as unusual in its exploration of form as it is in its reflection on love. Because ultimately it is all about love. 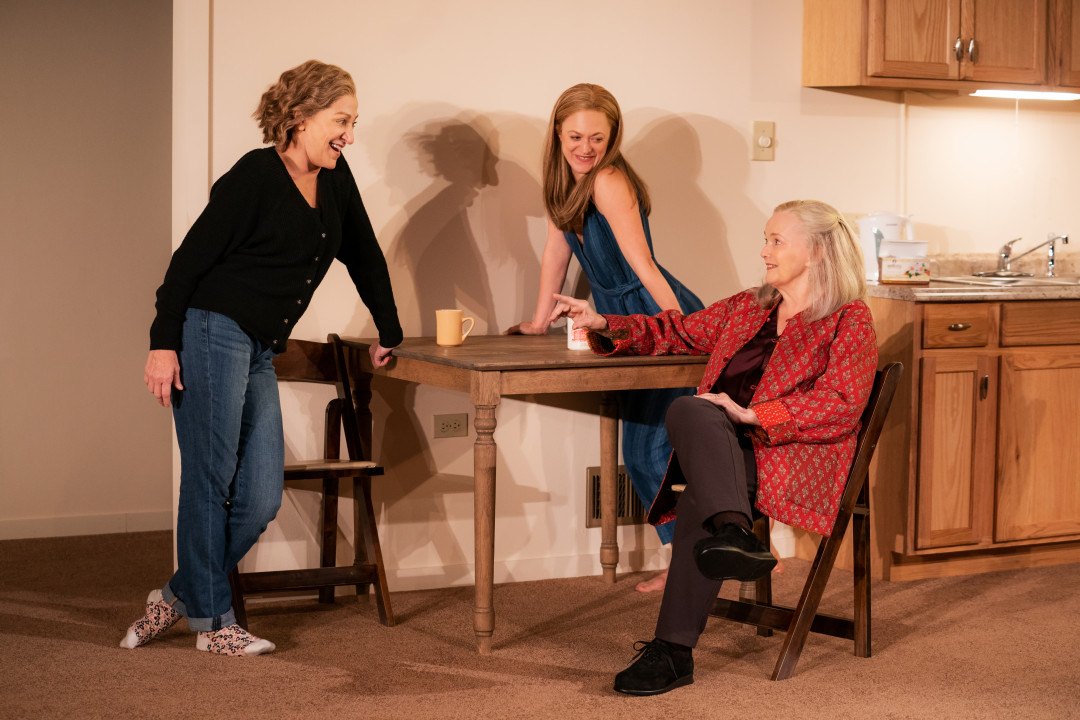 November 18, 2021: Stealthy, indeed, is a quality that distinguishes playwright Simon Stephens, whose latest work, “Morning Sun”, is as unusual in its exploration of form as it is in its reflection on love. Because ultimately it is all about love.

Here, a family’s history is told by three women of three consecutive generations. The oldest, 2 as she’s referred to in the text, is played by Blair Brown, the matriarch – mother to 1 (Edie Falco) and grandmother to 3 (Marin Ireland). Fortunately, in their dialogue they grant each other actual names.

As we know, there is no one more fascinating at discovering character than Edie Falco. Watching her unwrap her soul – it’s simply beyond repair.  Through the shadows on stage (lighting by Lap Chi Chu), we see a world in flux. At times Charley (Falco) is opaque, but she is also transparent.

While the actor is fluid, the dialogue is written in fragments. Without ladders or structures to sustain us, women build lives from fragments.

In the hands of this consummate trio identities and relationships get played out with extraordinary craft.  As directed by Lila Neugebauer, the physical life of the actors – their use of body language expresses the characters’ warmth and their vitality. They talk in that down-to-earth way people do when they’re family and they know they love each other. In that respect the narrative is straightforward. But as the story builds, the three actors transform into the various characters in their lives. Their tales, quotidian as they are, overlap, create shadows, and lead us into the privacy of their thoughts. Birth and death play the bookends, literally.

Chronologically, the play begins at the end and moves willy-nilly through time, revealing the sense of weight and the lack of balance in Charley’s life.

At the corner stone is her work. A receptionist at St. Vincent Hospital in the 80s, at the center of the AIDS epidemic, gives us a sense of Charley’s compassion. The St. Vincent she describes, however, is something of an archeological reality. Since the building is now a high rise condominium, it no longer houses the sick and the poor.

Exploring the crevices of the mind as in his stage adaptation of “The Curious Incident of the Dog” and “Sea Wall “is Stephens’ wont. And “Morning Sun” is a stunning exploration into the inner recesses of women’s lives. More of an excavation really as the characters, moving back and forth in time, morph from themselves into their parents, their lovers and husbands. We even meet a rejecting friend who judges Charley for choosing to be a single mother. No one wants to see their love dashed by social judgement. And in a woman’s story, condemnation for giving birth is jarring, at best.

“We never anticipate these,” her mother Claudette shudders. “But they happen.” As spoken by Blair Brown, it sounds so characteristically Woman.  Her observation validates the act of acceptance in a way only women really have to know.

Introspection, the gaze inward –  not the male gaze – shapes the narrative. It’s actually a lot like the titular painting, “Morning Sun” by Edward Hopper, where a woman sits alone on a bed, contemplating herself, sadly isolated from the world outside.  The three women refer to it often, to when they first saw it, and the person who introduced them to it. Similarly, Stephens’ drama spurs us to examine our relationship to Woman – the woman inside ourselves as well as the other, the mother, lover, wife, daughter, etc.

Graced by three exceptional actors, the production is engrossing. Performed on one set (scenic design by dots) – a New York City apartment, barely furnished, leaves ample playing field for these ladies and the multiple venues to which they take us. Costumes (Kaye Boyce, designer), too, are simple and basic. In that context, the wigs and hair designs make an interesting statement. Falco especially, wearing what looks like a wig (Tom Watson, designer) that resembles her natural hair, seems to be pointing us to the nature of and the humor of artifice.

Clearly, these are delicate relationships. Watching how they develop through three generations of McBrides, over two mesmerizing hours of intimate story telling is totally blissful.