November 6, 2021: The content of Simon Stephens’ Morning Sun is not extraordinary, earth-shaking, or even that unusual. He seems to be aiming for a portrait of universal humanity through one ordinary life, much like Thornton Wilder’s Our Town. The goal is ambitious and Lila Neugebauer’s spare, delicate production, performed by three of our top actresses (Edie Falco, Blair Brown and Marin Ireland) is beautiful and touching, but the play itself still feels slender, much like Stephens’ previous work Heisenberg about a quirky May-December romance which ran slightly over an hour and felt like a skinny short story. 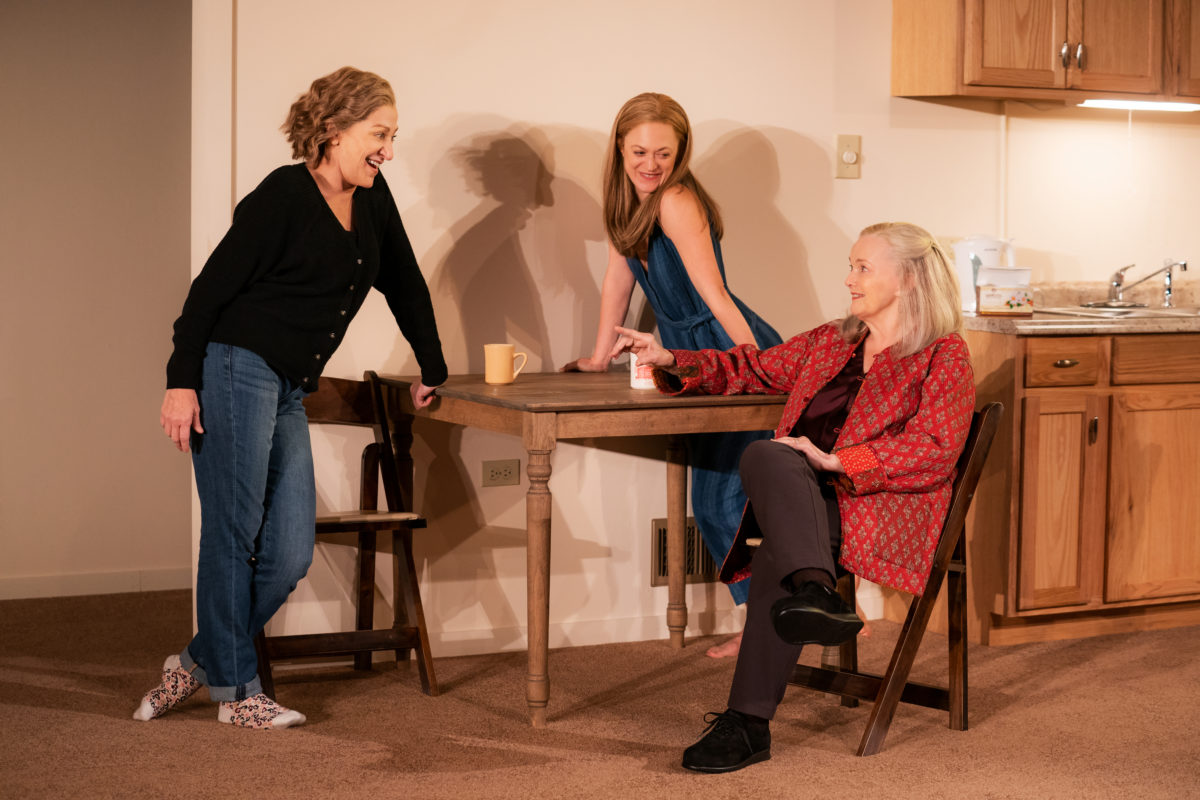 November 6, 2021: The content of Simon Stephens’ Morning Sun is not extraordinary, earth-shaking, or even that unusual. He seems to be aiming for a portrait of universal humanity through one ordinary life, much like Thornton Wilder’s Our Town. The goal is ambitious and Lila Neugebauer’s spare, delicate production, performed by three of our top actresses (Edie Falco, Blair Brown and Marin Ireland) is beautiful and touching, but the play itself still feels slender, much like Stephens’ previous work Heisenberg about a quirky May-December romance which ran slightly over an hour and felt like a skinny short story.

Sun is a 100-minute play presented by Manhattan Theater Club at City Center and focuses on three generations of women in Greenwich Village. The Playbill lists them as 1, 2, and 3, like the women identified as only letters in Edward Albee’s Three Tall Women. But Stephens’ play is much more direct and simple than Albee’s Pulitzer Prize-winning meditation on mortality. We are in what appears to be a basement meeting room with a kitchenette, plants, folding chairs and a closet with a vacuum cleaner (the generic-looking set was designed by the firm dots). The three seem to be gathered to sum up their life stories in a kind of community-meeting-hall afterlife.

At first, it appears the focus is on the character designated as 2 (Brown), but gradually we learn the story is about her daughter 1 (which should be evident from the numbers.) “This is my story, Mom, not yours,” 1 says to 2. Though they are listed as numbers, they are also given names. Falco is Charley, a hospital receptionist; Brown is Claudette, her demanding mother; and Ireland is 3/Tessa, Charley’s independent daughter. The play follows Charley as she grows up, loses her beloved father, becomes a single mother, serves on the front lines of the AIDS crisis at her hospital job, meets her true love after an abusive relationship, and finally succumbs to cancer. All the other roles in her life, both male and female, are played by the other two.

The play is also a love letter to New York City with numerous Gotham landmarks such as Central Park and The New School and historical events like World War II, the disco era, 9-11, checked off like items on a list. Charley visits museums and has an affinity for Edward Hopper—the title is derived from one of his paintings she favors.

The main theme seems to that routine, ordinary lives are just as worthy of celebration as those of high-earning doctors and lawyers. Claudette and Charley express disappointment with their respective daughters for not living up to their potential or responsibilities. They counter that being a good friend, mother, or partner is just as important as earning a huge salary or having an impressive degree. But these big confrontation scenes feel forced as if Stephens needed some conflict to illuminate any otherwise uninvolving script.

Fortunately, the acting is indeed luminous as the three stars delve deeply into the psyches of the many characters they portray. Falco is particularly intense as Charley when she defends her life choices to her mother and a disapproving friend and, in the final scene, when she desperately enumerates all the pleasures and pain she wishes to love over. Brown and Ireland are impressive as they seamlessly shift between roles and genders. Lap Chi Chu’s versatile lighting effectively sets the transitions and multiple settings and moods. See Sun for the acting, but don’t expect any great revelations and you won’t be disappointed.

Speaking of disappointments, Douglas Carter Beane’s Fairycakes was a major one. It all sounded fantastic in the press release, a mashing up of A Midsummer Night’s Dream with several traditional fairy tales by one of the sharpest wits of today, the author of such piercing satires as As Bees in Honey Drown, And the Little Dog Laughed, and The Nance as well as the books for Xanadu and Lysistrata Jones. With a cast of Broadway vets like Julie Halston, Jackie Hoffman, Ann Harada, Arnie Burton and journalist-humorist Mo Rocca, this comedy was sure to be a laugh riot, right? Wrong.

The central premise is kinda cute. The fairies from such beloved tales as Pinocchio, Cinderella and Peter Pan are really the such ephemeral folks in Midsummer. When their magical parents Oberon and Titania are on the verge of splitting up, a scheme is launched to reunite them but it results in mismatched liaisons among the fairy-tale denizens. The problem is Stephen Sondheim and James Lapine have already mined this basic concept with success in Into the Woods. Beane sets up the gag of ill-suited lovers chasing each other and then it gets repeated several times. The material may have worked for a 20-minute sketch, but at nearly two and half hours, Fairycakes is way too long and repetitive. In addition, Beane should not have directed his own material. An objective stager might have advised cuts and tightened up the pacing. Beane lingers on unfunny bits and allows the scenes to drag. There are some chuckles, mostly provided by Hoffman’s deadpan delivery, but these cakes can be passed by without regret.