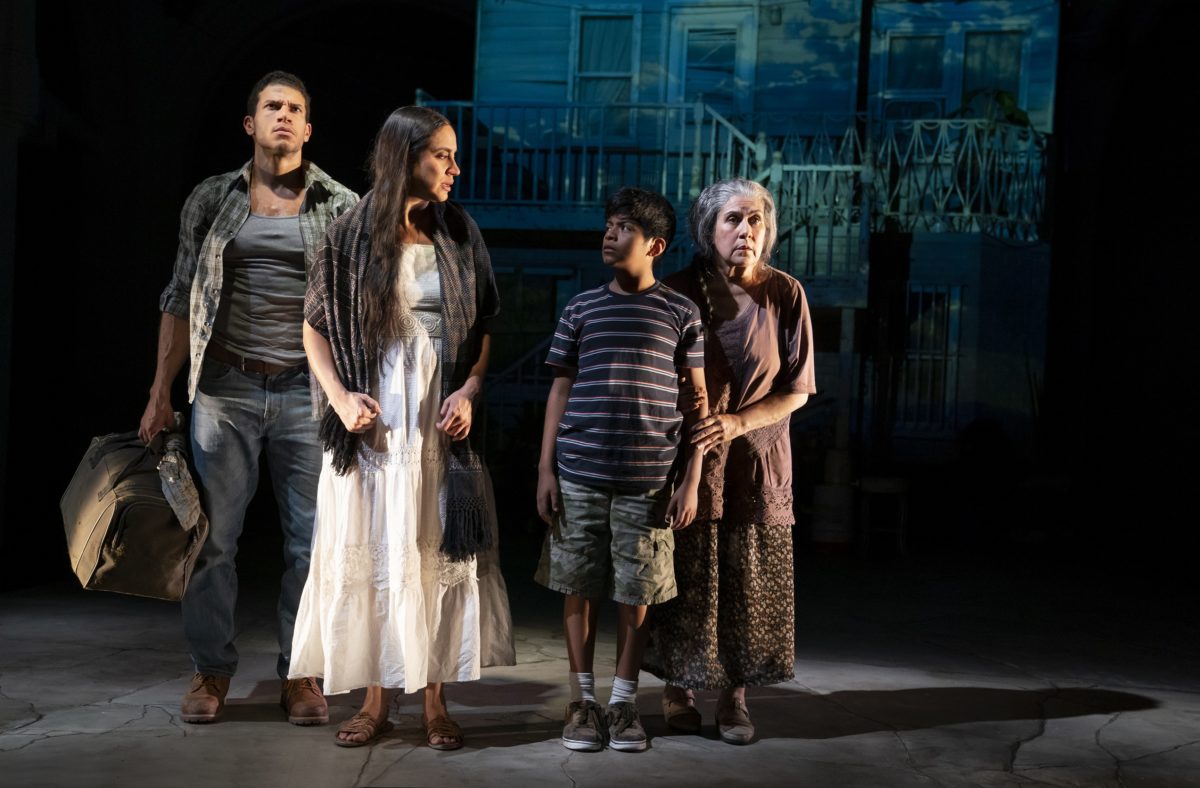 Like the way she spoke, Luis Alfaro’s Mojada concerns Mexicans, its focus the burning problem of immigration. The word itself, meaning “wet,” refers to Mexican immigrants who come here illegally by swimming across the Rio Grande, “wetbacks,” to use the derogatory vernacular. While it contains a few effective moments, Mojada falls down in so many others that one almost wishes it had been detained at the border for further processing after leaving its home at Chicago’s Victory Gardens Theatre, where director Chay Yew’s production originated.

Alfaro’s interesting idea is to adapt Euripides’ Greek tragedy Medea to the situation of undocumented immigrants living in Corona, Queens. For the most part, he does an often clever job of staying within the broad outlines of the original to tell the story of the beautiful, young Medea (Sabina Zúñega Varela) and her handsome husband, Jason (pronounced Hahson; Alex Hernandez) These poor, rural peasants have escaped the hardships of life in Zamora, Mexico, by fleeing with their skeptical old servant, Tita (Socorro Santiago), and 10-year-old son, Acan (Benjamin Luis McCracken).

Most of the action occurs in the backyard of their shabby home, realistically designed by Arnulfo Maldonado and lit by David Weiner, supplemented by Stephen Mazurek’s suggestive projections. Here, Medea, a talented seamstress, slaves away for long hours at sweatshop wages making garments that sell to wealthy people for big prices. Why she does this in the backyard is one of the play’s many questionable elements.

Jason, who, like Medea, is deeply committed to their son, has, during the year since they came to New York, gotten work fixing up new apartments in buildings owned by the wealthy, glamorous Pilar (Ada Maris), a Cuban immigrant. She came to the States on the Mariel boatlift of 1980, when she was 19, married a rich Jew who died years earlier, and is now a successful landlady who owns the house in which Medea and her family live, rent-free. Despite being what simple math would say is 66, she looked to me, in her eye-catching, body-hugging, power outfits (designed by Haydee Zelideth), like a hot tamale at least 15, if not more, years younger.

Since Jason betrays Medea by taking up with Pilar, she has to be a sexually appetizing cougar, but Maris’s casting takes things to extremes. Another casting anomaly is that of Jason himself, given the perfectly chiseled, muscle-on-muscle physique Hernandez displays in a sex scene with Medea. Maybe those long hours he says he’s working are actually at the gym.

Jason is aggressively ambitious to make good in America, and to Americanize his family as much as possible (no Mexican soccer shirts for Acan!). That, in fact, is the rationale he uses when explaining his infidelity, as Pilar has the money and power to help him realize his goals. But Medea, unable to overcome some sort of trauma (of which we later learn), can neither make love nor leave the house.

There are several minor characters, but the only one of substance is Luisa (Vanessa Aspillaga), a boisterously friendly, disarmingly frank, Puerto Rican churros vendor. Medea agrees to tailor a dress for her conspicuously chubby figure (displayed when she partially disrobes in front of everyone). As overplayed by Aspillaga, she enters shouting and rarely lowers her voice or energy throughout. If this be comic relief, I prayed, give me relief from it.

Ultimately, Alfaro has to come to terms with the demands of Euripides’ gory finale, as his Medea finds herself with no escape from the dilemma that Jason’s relationship with Pilar has created. And Pilar, for all her initial reasonableness, has to be portrayed as such a hateful villain that she deserves any terrible thing fate has in store for her.

With the audience gasping at and applauding what transpires, Alfaro can find no way out of the corner into which he’s painted himself. He can do little other than to offer surprise revelations and a Euripidean solution that not only depends on the Greek business about a certain garment, but, in the naturalistic confines of this world, turns the ancient tragedy into a Theatre of Cruelty melodrama. I felt irritation, not catharsis.

Alfaro, highly praised for the Public’s staging of his Oedipus el Rey, also inspired by a Greek tragedy, is intent not merely on mirroring the Medea story. He desperately wants to present the horrors of what immigrants endure to get to this country from south of the border. This leads him suddenly to stop the action at several points for stylized, extended flashbacks, largely narrated by Medea, in which the family’s painful journey is recounted in mime. Regardless of their topical value, these reenactments are interruptions that make Mojada more like two plays than one. Alfaro should have found a more organic way to incorporate the journey’s most important expository parts into the play proper.

The English-language dialogue is filled with Spanish expressions but the premise is that everyone is speaking Spanish, not English. Yet only Luisa, for undisclosed reasons, uses a Spanish accent, and a very pronounced one at that. This, however, isn’t to separate her from the Mexicans by virtue of her speaking a different dialect. Pilar, after all, a Cuban, speaks unaccented English. Listening to the cast’s decidedly American speech (especially Santiago’s), regardless of the well-pronounced (I imagine) Spanish phrases, is disconcerting and weakens the ethnic flavor.

While realism is the dominant style, Mojada occasionally introduces elements of magic realism through rituals related to Medea’s healing powers, learned from Tita, which are carried out with large banana leaves used like wings. The imagery of flight surrounds Medea, who is likened to a guaco bird. She even crows loudly at certain moments. One might, then, imagine the play’s final moments to somehow reflect the Greek Medea’s flying away in the sun god’s chariot.

There’s a lot of big emoting but it’s not particularly affecting. Varela’s Medea, for all its passion and real tears, sounds more stagey than authentic. (And why is she always in the same white shift?) Hernandez is good but there’s no way this Jason was a peasant a year earlier. Santiago plays a stereotype without giving her much depth, while Maris would be more credible if she were older or her character was younger. McCracken makes a suitable young son but Aspillaga has immigrated from a different play.

This viewer did not find Mojada as “heartbreaking” as Public Theater artistic director Oskar Eustis describes it. It uncovers considerable possibilities in using Euripides as a source for a modern drama but, among its many handicaps, it needs a more believable resolution of its dramatic problem and a better way of incorporating its backstory into its front one.

Is it a tragedy of infidelity among undocumented aliens? Is it a depiction of the travails faced by such persons in trying to make a new life in a strange country? Until it answers those questions, it remains in playwriting detention.

Note: New York audiences will have an opportunity to compare this modern adaptation of Medea with another, in January 2020, when Rose Byrne and Bobby Cannavale, husband and wife, will costar in Simon Stone’s version, based on an actual 1995 homicide, at BAM.