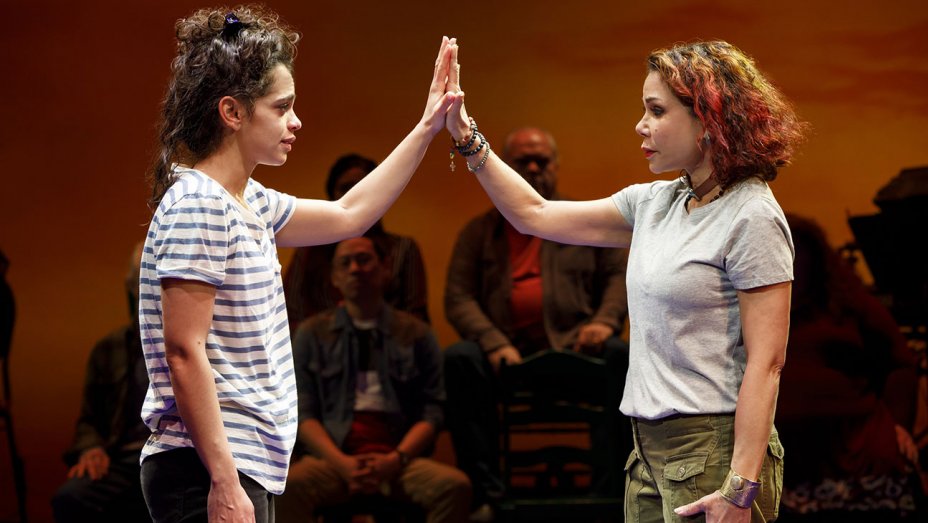 Gizel Jimenez (left) and Daphne Rubin-Vega “Miss You Like Hell”

Miss You Like Hell, playing at the Public’s largest space the Newman, addresses topics rarely featured in tuners but does so with a tried and true template. The precarious lives led by undocumented immigrants form the background of the sweet-natured, but ultimately conventional show. Beatriz travels to Philadelphia from her home in California to reconnect with her estranged daughter Olivia after the young girl posts a suicide threat on her blog. The mother, who has been out of her offspring’s life for several years, proposes a cross-country bonding adventure in her broken-down van. What Beatriz has not told Olivia is that she needs her daughter to testify for her at a deportation hearing.

Of course, the two fight, cry, and make up by the end of 100 intermissionless minutes. Quiara Alegria Hudes crams a lot into her often sharp, but too syrupy book. There are moments of poignant connection between the nonconformist, impulsive Beatriz and the lonely, whip-smart Olivia. But there are also too many TV-movie cliches as they encounter a small army of friendly strangers to help them on their way. The score features eclectic and engaging music by Erin McKeown and quirky lyrics by McKeown and Hudes. Obie winner Lear DeBessonet’s staging makes innovative use of Riccardo Hernandez’s revolving set and Tyler Micoleau’s scene-setting lighting.

Upstairs at the Martinson, Lynn Nottage’s Mlima’s Tale also features innovative and spare staging (from another Obie winner, Jo Bonney) but avoids the familiar tropes of Miss You. This incisive 80-minute explosive device of a play follows the spiritual voyage of Mlima, a beloved Kenyan National Park elephant murdered for his prodigious tusks. Following the template of La Ronde, the pachyderm’s ghost (played with expressive, dance-like eloquence by Sahr Ngaujah) spans continents as his tusks are moved from hunter to bribable police official to fence to artist to millionaire collector. Based on an article by Damon Tabor, Nottage’s cynical roundelay of greed maps out the trial of corruption which makes such cruelty commonplace and lucrative. Riccardo Hernandez also designed the spare setting transformed in rolling veldts, dirty shipping docks, and luxurious boutiques and penthouses by Lap Chi Chu’s versatile lighting. All of the human roles are played with dexterity and diversity by Ito Aghayere, Jojo Gonzalez, and Kevin Mambo. Mlima’s Tale is a harrowing trip, but well worth taking.