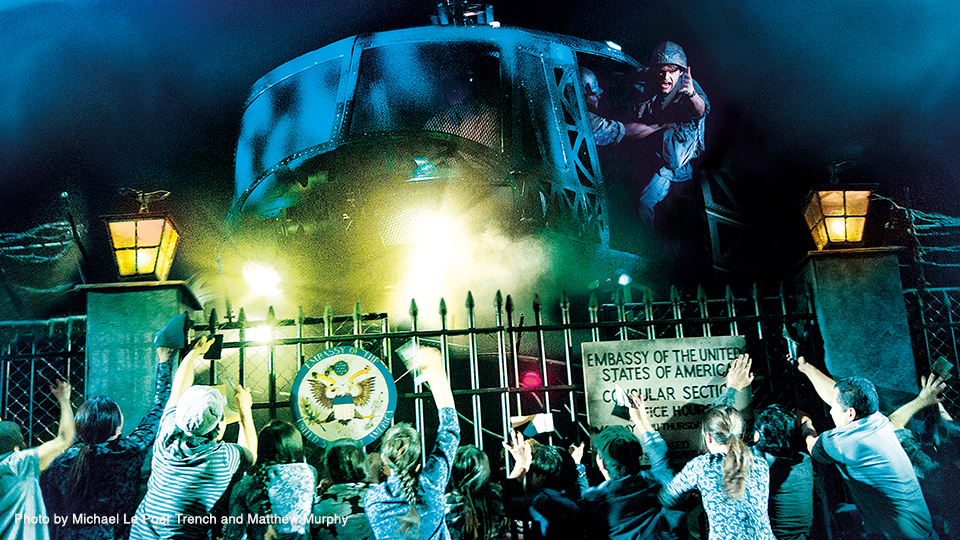 After all, the Viet Nam War is a bummer to me and so is the Madame Butterfly theme — the show is billed as an epic love story, but buying a prostitute doesn’t usually land on my list of themes for that category. While the score is beautiful, I had seen the most recent tour of the musical, directed by Nicholas Hytner, and found the story dated. Well, let’s just say that first thoughts aren’t always correct and this production deserves its Tony Award nomination for Best Revival of a Musical.

This Broadway version, brilliantly directed by Laurence Connor, is moving and feels relevant for today. Eva Noblezada (nominated for a Tony Award) makes an outstanding Broadway debut as Kim, a 17-year-old Vietnamese girl who finds herself at the sleazy Saigon bar run by “The Engineer” (Jon Jon Briones) who runs a contest to crown one of his prostitutes “Miss Saigon,” and get more money for her services to an American soldier.

Kim is bought by John (Nicholas Christopher) for his pal, Chris (Alistair Brammer), but they find something more than a regular night of sex for hire. For Chris, Kim provides an escape from the horrors of war. Chris’ gentleness combined with her first sexual experience causes Kim to fall in love.

The two are separated during the fall of Saigon (and yes, the famous helicopter makes an appearance) and after giving up on his search for Kim, Chris goes back to his regular life in the States, marrying his girlfriend, Ellen (Katie Rose Clarke) and never mentioning Kim, except to call out her name during nightmares.  Kim, meanwhile does what she has to do to survive and hides the son she bore Chris: Tam (I saw cute-as-a-button Jace Chen in the role shared with other child actors). When her secret is revealed to Thuy (Devin Ilaw), the man to whom she had been promised in marriage and he threatens the boy, Kim does what she has to do to protect her son.

Noblezada produces an amazing transformation from innocent child to mature mother and maintains it until a flashback scene where she is a young girl again. Her portrayal is riveting and far beyond the abilities of most actors her age. Her singing voice is lovely boasting a wide range and is more than able to handle all of the belts required. “I’d Give My Life for You” is heart-wrenching.

Meanwhile, the Engineer cooks up a scheme to pass himself off as Kim’s brother and use Tam’s American father to secure them entry visas to the United States. John, who has been helping orphans fathered by US soldiers, but left behind in Viet Nam, discovers that Chris has a son. Hopes for a reconciliation with the man to whom she believes she is married are dashed, however, when Kim meets Ellen.

Besides Noblezada’s gripping performance, other characters are compelling as well. Brammer’s Chris is a lot more likable. We get the impression he actually cared for Kim and really was unaware when a wedding ceremony between them took place. Other versions portray him as a user and unfeeling. Briones makes the Engineer humorous and less repulsive. The result is that we are moved by these characters and rooting for them.

Standing out is exceptional lighting by Bruno Poet which enhances all of the creative elements: Sets designed by Totie Driver, Costumes designed by Andreane Neofitou; Projections designed by Luke Halls; and additional Choreography by Geoffrey Garratt.

James Moore is the Music Director and William David Brohn orchestrates the score that makes up the two hours and 40 minutes of the musical’s opera format. Connor’s direction brings this one home, making the themes, especially the plight of the refugees, feel very contemporary. This one is a don’t miss.