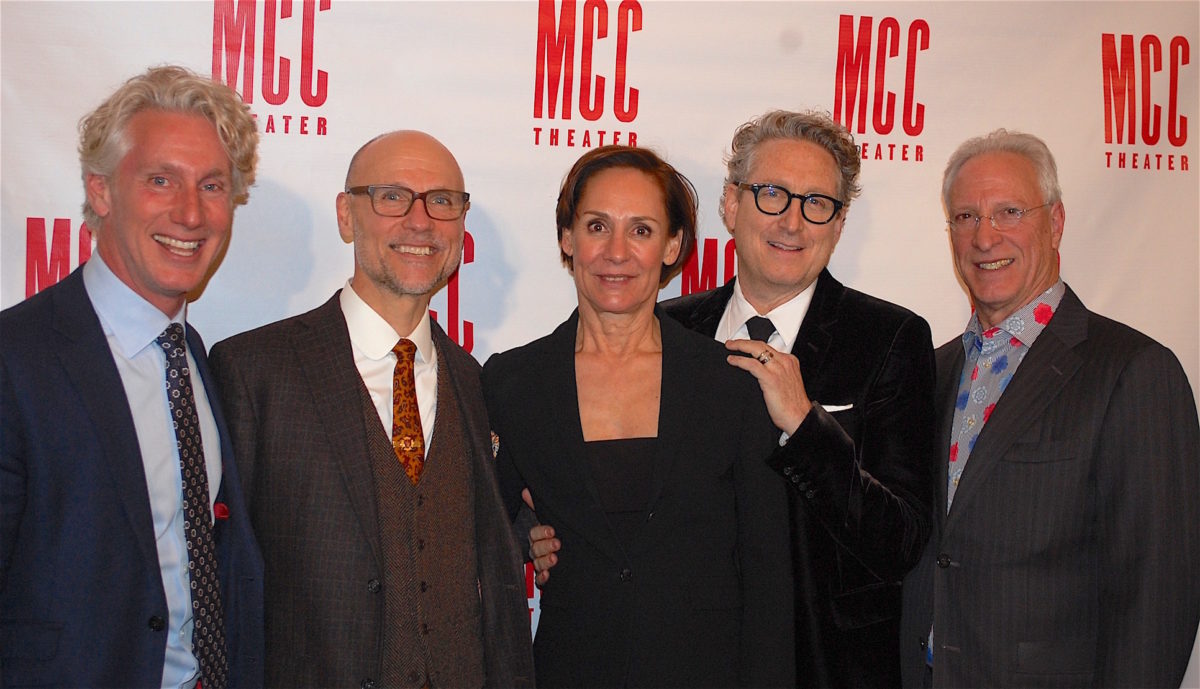 Before taking the stage to perform Jamie Wellerstein’s number, “Shiksa Goddess” from The Last Five Years (because “Jason Robert Brown said she was too Jewish to play female protagonist Cathy”), she admitted that she loves to belt The Color Purple tunes when no one is around to hear. She also wouldn’t mind joining Frozen co-star Greg Hildreth (Olaf) to break out into her own version of “What Do You Know About Love?,” a number usually performed by Anna and Kristoff. “Elsa and Olaf could rock that. We’ll have to work on a little B-version of it,“ she joked. Jeremy Jordan said he goes for broke with Etta James’ “At Last,” but brought down the house at the Hammerstein Ballroom with co-performer Sara Bareilles’ “She Used to Be Mine” (the 11 o’clock number in Waitress). “You got the part,” joked Bareilles to Jordan.

The new star of NBC’s Rise, Auli’I Cravalho, known for her stunning vocals as the voice of Moana, says that her empty home often gets treated to Cardi B’s “Bodack Yellow.” “Fun fact, I don’t sing in the shower because I honest to god think that I’m going to drown,” she laughed. “But I feel like something of a rap goddess when I sing it. I usually sing it softly before I go to sleep because I’m going to be so lit before I got to bed. This way I wake up a better person and never say that out loud again.” Until the next evening, of course. Cravalho went on to perform a little ditty that she thought she was plucking from obscurity, West Side Story’s “Something’s Coming.”

Hamilton’s James Monroe Iglehart stole the evening as he stepped into Anjelica’s shoes for the hit musical’s showstopper, “Satisfied.” With an assist from current Eliza, Lexi Lawson, and former Alexander Hamilton, Javier Munoz, which came complete with the now-iconic hand kiss and escort, the number was a unique treat. Iglehart told Theaterlife that his go-to song involves emulating another leading lady- Angela Lansbury in Sweeney Todd. “I love ‘Worst Pies in London,’” he said, singing a few impromptu lyrics.

Other numbers that brought the audience to its feet included Once on This Island’s Alex Newell’s finale, an earth-shaking rendition of “This is Me” (though it is a number that could actually be performed by the actor, so it wasn’t exactly an example of “miscasting”). The Band’s Visit’s Katrina Lenk made an entrance with Fiddler on the Roof’s “If I Were a Rich Man,” even taking on the fiddle solos with her hidden talent on the instrument. Spongebob Squarepants’ Gavin Lee, Ethan Slater and Wesley Taylor admitted to Theaterlife that they would love to take on girl bands at Miscast, and even suggested Spice Girls, Dixie Chicks and Destiny’s Child (respectively) as groups well-suited for the trio. Instead, they were hysterically brilliant as April, Kathy and Marta in Company, performing “You Could Drive a Person Crazy” with ridiculously fun choreography by Mark Myars.

Sara Bareilles performed the most poignant song of the evening, Ragtime’s “Make Them Hear You,” flanked by images of women marching for equal rights. Though many women were celebrated throughout the evening, all minds were on the guest of honor, who was flanked by her two daughters, Mae Akins and Young Sheldon’s Zoe Perry. “I love Laurie,” said Jordan. “I got to work with her recently because she plays my mom on Supergirl. It hasn’t aired yet, but her character is an okay mom. Well, not the best mom. You’ll see!” he laughed.

Metcalf’s co-star in A Doll’s House, Part 2, Jayne Houdyshell, said that any year would be a good year to celebrate Metcalf. “I think that the trajectory and body of work that she has done over her lifetime thus far is quite phenomenal,” she said. “Her range is boundless. I’m just glad that she’s one of the strong women who has been out there for the long haul and will be there for the future as well.”

There are no limits to the affection Lady Bird director Greta Gerwig has for Metcalf. “Laurie is one of my very favorite actresses who has ever lived, and the fact that I got to work with her as a director was just a tremendous gift,” she told Theaterlife of working with her on the Academy Award-nominated film. “Honestly, if anybody says to me Laurie Metcalf is involved, I will for the rest of my life jump to do it. I owe her everything and any excuse that I have to talk about how brilliant she is, I’ll take it. She’s a goddess!”